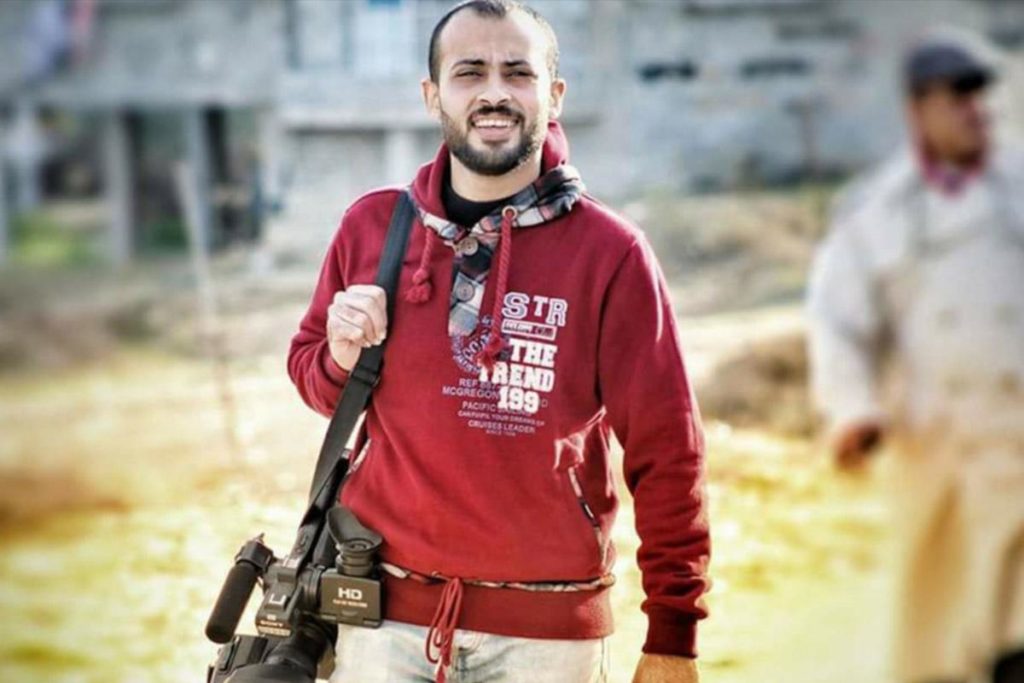 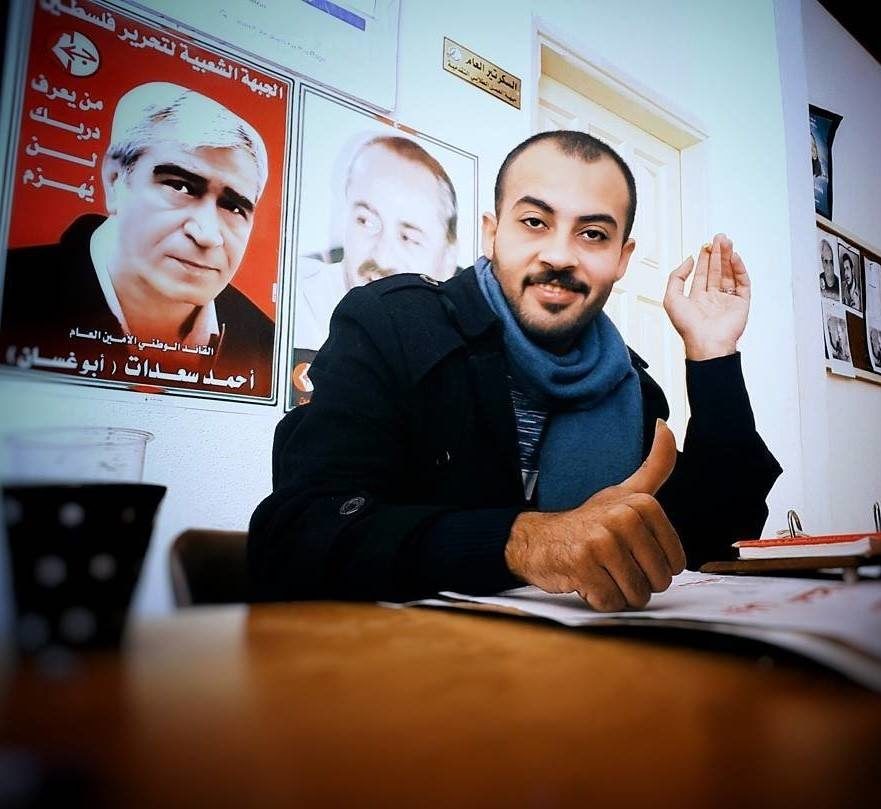 After he was shot, he was forced to wait for two days to be transferred from Gaza to Ramallah for treatment, finally receiving permission on 15 April. Once he arrived, his condition was so critical that he was transferred again to Tel Hashomer hospital four days later. Ashraf al-Qidra of the Ministry of Health in Gaza, said that the Israeli “security” delay prohibiting Abu Hussein’s immediate transfer ensured his death, while Osama al-Najjar of the Health Ministry in Ramallah said that he “needed a miracle to save his life” after his arrival. He was accompanied by his mother Rajaa, who refused to leave his bedside; his younger brother Diyaa, 16 was denied permission to join them due to “security” pretexts; he also has a 20-year-old sister, Luna.

Abu Hussein and his family are Palestinian refugees; he lived in the Jabaliya refugee camp. They are among 70 percent of the Palestinian population in Gaza who are refugees denied their right to return to their homes and villages in Palestine ’48 for 70 years by the Israeli occupation. The Great March of Return, in which tens of thousands of Palestinians have participated, demands the implementation of their right to return home and an end to the siege on Gaza. The Israeli occupation has hit these mass, popular protests with intense violence, live ammunition and the death of dozens, the amputation of hundreds of limbs and the wounding of thousands. 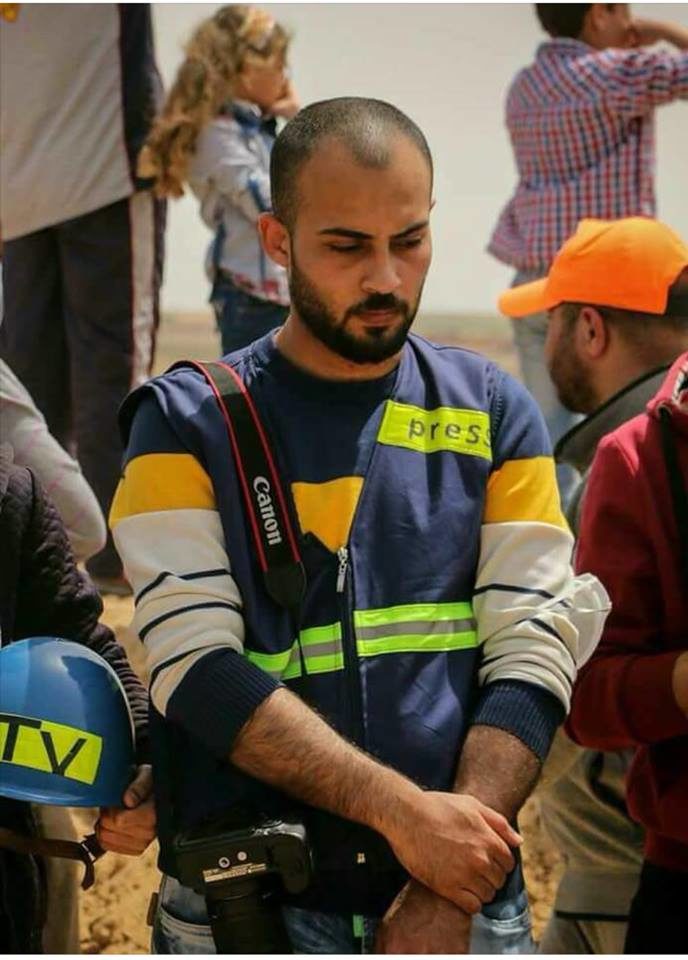 Rami al-Sharafi, general secretary of the Democratic Press Association, said in an interview with Middle East Eye that “Ahmad was wearing a blue vest marked as press in fluorescent color…They have committed a crime against Yaser Murtaja, and today Ahmad Abu Hussein. This says that every journalist documenting the truth along the borderline is an Israeli target.”

In addition to working as a journalist with Sawt al-Shaab radio for the past five years, Abu Hussein was an activist with the Progressive Student Labor Front and a member of the Democratic Press Association. Thousands of Palestinians marched in a mass funeral when his body was returned, only hours before thousands would again take the streets in Jabalya to mourn Dr. Fadi al-Batsh, the Palestinian electrical engineer assassinated in Malaysia on 20 April by the Israeli Mossad, according to evidence collected by the Malaysian police.

The Palestinian Journalists’ Syndicate also held a symbolic funeral for Abu Hussein in Ramallah in Manara Square, denouncing the ongoing Israeli targeting of Palestinian journalists, noting that this is a “clear attempt to conceal the truth and prevent the media from covering and exposing the ongoing crimes against our people, including the use of internationally prohibited weapons against journalists and demonstrators.”  The syndicate called for occupation officials to be held accountable and for the files on the assassination of journalists, including Abu Hussein and Murtaja, to be brought to the International Criminal Court.

The Democratic Press Association issued a statement urging international organizations, human rights groups and the International Federation of Journalists to take action against the ongoing, deliberate targeting of Palestinian journalists. “This continuous targeting is inseparable from the crimes of the occupation against our people. The Palestinian media is in the forefront of uncovering and documenting the crimes of the occupation for decades, and this targeting is a systematic and deliberate crime to stop this role in struggle.”

The International Federation of Journalists issued a statement joining the condemnation and call to action of the Palestinian Journalists’ Syndicate.

“The PJS stresses that the occupation authorities and their leader bear full responsibility for these ongoing crimes and reiterates its emphasis on intensifying its efforts to go after the occupation leaders for their crimes against journalists, especially the deliberate and documented killings of journalists Ahmad Abu Hussein and Yassir Murtaja, and it vows not to rest until the perpetrators are brought to justice,” said the union in a statement.

“It is clear that after Israeli soldiers murdered a journalist the authorities are more interested in spouting propaganda and engaging in a cover-up than in carrying out a thorough and transparent investigation and bringing Hussein and Yasser’s killers to justice,” said IFJ General Secretary Anthony Bellanger.

The following 42 Palestinians have been killed by Israeli occupation forces while participating in the mass popular demonstrations, the Great March of Return, which began in Gaza on 30 March – Land Day – and will continue through 15 May – Nakba Day: