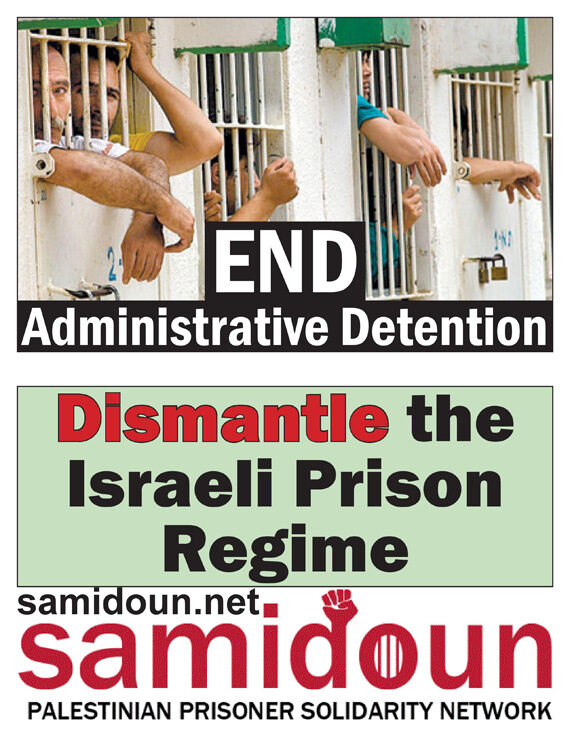 Nearly 500 Palestinian prisoners held without charge or trial under administrative detention orders are continuing their boycott of Israeli courts for the 68th day as of 23 April. They launched their boycott on 15 February, refusing to participate in the hearings that serve as a rubber stamp of the orders for their imprisonment without charge or trial that come from the Israeli military and security forces.

Maher Harb of the Palestinian Prisoners’ Committee in Nablus said that they are considering escalating steps in their struggle, up to and potentially including an open hunger strike.

Administrative detention orders are indefinitely renewable and are issued in one to six month periods at a time. The detainees are demanding an end to the practice of administrative detention, which dates from the period of the British colonial mandate in Palestine before being adopted as a tool of Zionist colonization. Palestinians can be jailed for years at a time without charge or trial; Ibrahim al-Arouj, 34, just had his administrative detention renewed for the eighth time, ordering him arbitrarily imprisoneed for another three months.

Several Palestinian prisoners, including one held in administrative detention, are also engaged in hunger strikes; Sami Janazra, held without charge or trial, has been on hunger strike for 28 days. He previously won his release from a previous period of administrative detention with a 69-day strike. Among the ohter hunger strikers are Amir al-Sarkaji, protesting his interrogation in Petah Tikva for 26 days and Diaa al-Shani, protesting his re-arrest in Etzion detention center for 9 days.

The Israeli occupation authorities have issued 41 administrative detention orders against Palestinian prisoners since the beginning of April through the 18th of the month, said Palestinian lawyer Mahmoud al-Halabi of the Palestinian Prisoners’ Society.

The orders were issued against the following Palestinians: