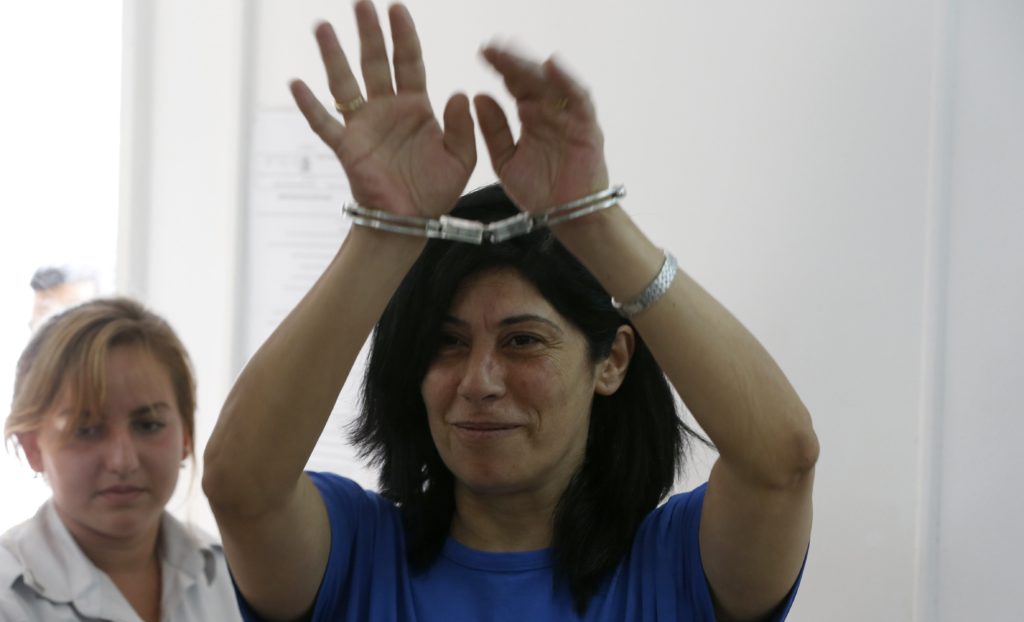 The extension of Khalida’s administrative detention does not mean that the campaign is stopping – on the contrary, it illustrates just how critical it is to pressure the Israeli occupation to demand her freedom.

Administrative detention orders, first introduced to Palestine by the British colonial mandate and continued in frequent use by the Israeli occupier, are indefinitely renewable, with no charge or trial, on the basis of secret evidence.  The Israeli military courts have not yet confirmed the administrative detention order. While they operate as an essential rubber stamp for such orders – prompting an ongoing boycott by the approximately 450 Palestinians held without charge or trial in administrative detention, including Khalida – this period is particularly critical to escalate international demands for her freedom.

Samidoun Palestinian Prisoner Solidarity Network joins the call to action to demand freedom for imprisoned Palestinian leader, parliamentarian, feminist and leftist Khalida Jarrar, who has dedicated her life to struggling for justice for the Palestinian people and freedom for Palestinian prisoners. A member of the Palestinian Legislative Council, Jarrar was seized on 2 July 2017 by Israeli occupation forces who raided her family home, only one year after she was released from a prior term of political imprisonment. International protests and calls for her freedom from popular movements and officials met her arrest; nevertheless, in a clear show of impunity, the Israeli occupation ordered her to six months’ imprisonment without charge or trial under administrative detention.

Administrative detention orders are indefinitely renewable, with no charge or trial, on the basis of secret evidence. This is one reason why nearly 500 Palestinian administrative detainees – including Jarrar – are engaged in a collective boycott of the Israeli military courts to demand the abolition of the practice. The boycott has been ongoing for more than 100 days. Khalida Jarrar’s administrative detention order will expire on 30 June 2018 – international action and solidarity is necessary in order to pressure the Israeli occupation into releasing her rather than continuing her unjust and arbitrary detention once more.

Jarrar  is one of Palestine’s foremost advocates for freedom and justice. As Vice-Chair of the Board of Addameer, she works to free Palestinian political prisoners. Within the Palestinian Legislative Council, she is a member of the Palestinian national committee to bring Palestinian cases to the International Criminal Court and hold Israeli officials accountable internationally.

She is also facing repression inside Israeli prisons. Suha Jarrar, Khalida’s daughter, described her recent experience on Facebook. She was told that Israeli intelligence forces had banned her mother from receiving any books while detained. “When I asked for an explanation to such measure, the officer referred to two books that I had attempted to bring in at a previous visit. The two books were studies published by the Palestinian Center for Israeli Studies, “Madar”. One was Madar’s strategic report, the other titled “The Roots of Zionist Right-Wing Ideology”. The two books were banned from entering, noting that Madar’s studies are amongst the few books of political content that are regularly allowed inside Israeli prisons. This is not the first time Hasharon prison administration rejects the entry of the books I try to bring to mom, but it is the first time they impose such a punitive measure merely for rejecting the content of books I previously attempted to bring,” Suha wrote.

2. Organize a protest or demonstration at an the Israeli consulate or embassy or a public square for Khalida Jarrar  and distribute this post and other news about Khalida and the Palestinian prisoners. Find your nearest Israeli embassy here: https://embassy.goabroad.com/embassies-of/israel. Write to us at samidoun@samidoun.net or contact us on Facebook to let us know about your action! You can use the campaign graphics and materials at your action.

3. Write a letter and mail it yourself – this can increase the effectiveness of your call! The letter text and addresses are included in the call from Addameer, reprinted below.

Khalida Jarrar has been imprisoned since 2 July 2017 without charge or trial. Her administrative detention order runs the risk of being renewed on 30 June 2018.

As an administrative detainee, she has not been made privy to the information used to deny her of her freedom, and thus has not had a genuine chance to refute claims made against her. Such a situation represents a core of the occupation’s system of control. If you are a powerful and committed advocate for the human rights of the Palestinian people, then you are likely to lose your freedom in your struggle for basic dignity.

Khalida has worked tirelessly over her career as an advocate for the Palestinian prisoners, and for the rights of women. Following her time as the Director of Addameer, she was elected to the Palestinian Legislative Council (PLC) in 2006. Her roles as a PLC member included heading the Prisoners’ Commission and was a member of the Palestinian National Committee for the follow up with International Criminal Court (ICC). As part of her work, she was instrumental in facilitating the Palestinian ascension to the Rome Statute. As a result of her work, she has been denied permission to travel multiple times and was expelled to Jericho in 2014.

Khalida has been held in Administrative Detention on a separate occasion in 2015, prior to being sentenced to 15 months imprisonment by an Israeli Military Court. Following international pressure, she was released in June 2016. Since July 2017, she has had her administrative detention renewed once. For more details on her case, please see her prisoner profile and to learn more about her teaching international law to female prisoners while incarcerated, check here.

With this call for action and support, we hope to place pressure on the occupation to not renew her administrative detention order again. Her imprisonment represents a grave violation of international law and the international community must not stand silent in the face of such action.

There are very few times where there is a possibility of us having a genuine impact, but this is one of them. Khalida has committed her life to realizing basic Palestinian dignity through utilizing the international legal framework. For all of us who believe in justice, it is incumbent upon us to do all that we can to ensure her freedom.

As such, we call on all supporters to contact the key decision makers located below. Urge them to abide by international law, and release Khalida Jarrar.

1. Organize a protest, demonstration, speaking event or banner drop in your city, community or campus calling for freedom for Khalida Jarrar and her fellow Palestinian prisoners.

I write today to demand the immediate release of the Palestinian Legislative Council member Khalida Jarrar, who has been under administrative detention since June 2017.

Khalida Jarrar has been imprisoned since 2 July 2017 without charge or trial. Her administrative detention order runs the risk of being renewed on 30 June 2018. Khalida has been held in Administrative Detention on a separate occasion in 2015, prior to being sentenced to 15 months imprisonment by an Israeli Military Court. Following international pressure, she was released in June 2016. Since July 2017, she has had her administrative detention renewed once.

I demand the immediate release of Khalida Jarrar and an end to the administrative detention policy which is on the basis of so-called secret information. This is an attempt to prevent PLC members and human rights advocates, such as Khalida Jarrar, from dedicating their lives to achieving basic dignity for Palestinians. Her continued detention is arbitrary and unjust, and I demand her immediate freedom.

Commander of the IOF – West Bank