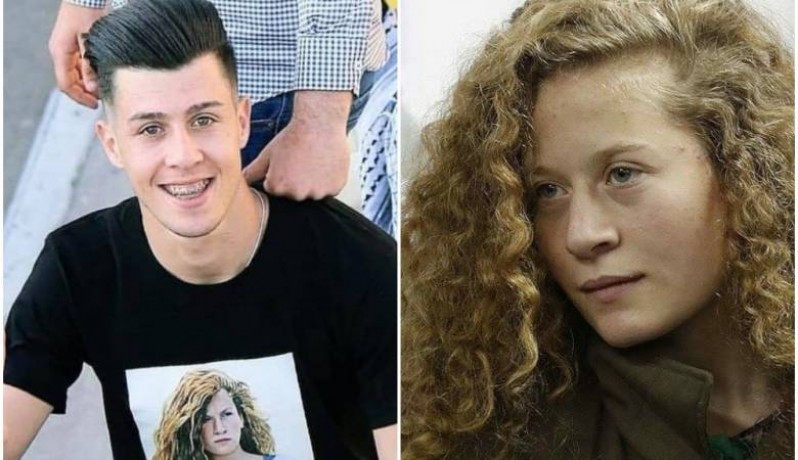 Palestinian youth activist Waed Tamimi, 21, the older brother of Ahed Tamimi and part of the grassroots anti-colonial indigenous land defense and resistance movement in the village of Nabi Saleh, was sentenced to 14 months in Israeli prison on 23 August 2018.

In addition to the 14-month sentence, he was fined 7,000 NIS ($1,929 USD) and ordered to a five-year “suspended sentence.” Suspended sentences are frequently used as a means of intimidating activists by threatening them with lengthy prison terms if they resume their political and community activities. Tamimi was seized on 10 May 2018 while his sister and mother, Nariman, were serving 8-month sentences in HaSharon prison in the well-known case in which his sister slapped a heavily armed Israeli occupation forces.

Stone-throwing charges are some of those most frequently pursued against Palestinian young people, especially children and minors under the age of 18. The penalties for stone-throwing can range up to years in prison.

Many members of the Tamimi family have been targeted for arrest, interrogation and imprisonment, especially following the arrest of Nariman and Ahed. The international spotlight that has focused on Waed’s younger sister has also been accompanied by ongoing military raids on the village, surrounded by the illegal colonial settlement of Halamish.  Nabi Saleh’s popular anti-colonial resistance to defend its land has continued despite the arrests, and Ahed’s arrest brought new attention to the people of the village’s ongoing struggle.

Bassem Tamimi, the father of Ahed and Waed, has been jailed by Israeli authorities on nine occasions between 1988 and 2013, during which he was subjected to various kinds of torture.