Palestinian prisoners Mohammed Abu Aker and Mustafa Hassanat suspended their hunger strikes after 36 days without food on Monday, 5 August, even as more prisoners joined the strike in solidarity with Palestinians demanding an end to administrative detention, Israeli imprisonment without charge or trial. Huzaifa Halabiya, who launched his strike with Abu Aker and Hassanat on 1 July, continues his strike for the 37th day despite increasingly critical health circumstances.

According to the agreement under which the strike was suspended, Abu Aker will be released in three months and his detention will not be extended again. Hassanat will be released in six months. The prison branch of the Popular Front for the Liberation of Palestine issued a statement saluting the prisoners on their struggle and announcing that more prisoners are joining the strike. “We, your comrades in the prisons branch, consider every victory achieved by the prisoners’ striggle to be another nail in the coffin of the administrative detention policy,” the statement affirmed. Earlier, 20 PFLP prisoners announced that they were joining the strike, and now 40 more announced that they will be joining the hunger strikes in waves of struggle.

After the announcement of the escalation of the strike, Israeli repressive forces invaded Ofer prison, attacking sections 19 and 20, where child prisoners are held with adult prisoners, on 4 August. During the violent raids, Zionist forces used tear gas and beatings against prisoners, ransacked their rooms and transferred some to other sections within Ofer and still more to other detention centers throughout occupied Palestine.

In response to the attacks, six more prisoners joined the hunger strike protesting the repression and transfers: Mohammed Tabnaja, Osama Odeh, Moataz Hamed, Thaer Hamayel, Rami Haifa and Shadi Shalaldeh. Prisoners in Ofer are returning meals and closing their sections, and the prison administration is retaliating by shutting the laundry and “canteen” (prison store.)

Halabiya, 33, from Abu Dis in Jerusalem, is suffering from severe health deterioration during his strike. He is a leukemia survivor who requires ongoing medical treatment and follow-up, and as a child he was burned over the majority of his body, also requiring ongoing care by a physician. Since his strike began, he has lost at least 16 kilograms (34 pounds) and is suffering intense pain, headaches, vomiting water and severe weakness. Halabiya was seized from his home on 10 June 2018 by occupation forces and taken from his pregnant wife; he has been denied the ability to meet his six-month-old daughter, Majdal, while under administrative detention.

Ahmad Ghannam, 45, who is also a leukemia survivor who requires ongoing medical care after receiving a bone marrow transplant two years ago, has been on hunger strike for 24 days against his imprisonment without charge or trial. He launched his strike immediately after being ordered to administrative detention, two weeks after he was seized from his home by Israeli occupation forces on 28 June 2019.  Sultan Khallouf, 38, has been on strike for 19 days, Ismail Ali for 16 days, Wajdi al-Awawda for 9 days and Tareq Qa’adan for one week.

Samidoun Network in occupied Palestine is organizing a protest on Wednesday, 7 August to win freedom for the prisoners and support their hunger strikes, as well as standing with Palestinian refugees in Lebanon struggling for civil, social and political rights – and their right to return home to occupied Palestine. The protest will take place at 4:30 pm in Manara Square in Ramallah. A number of organizations, including the National and Islamic Forces, have urged broad participation in the demonstration. 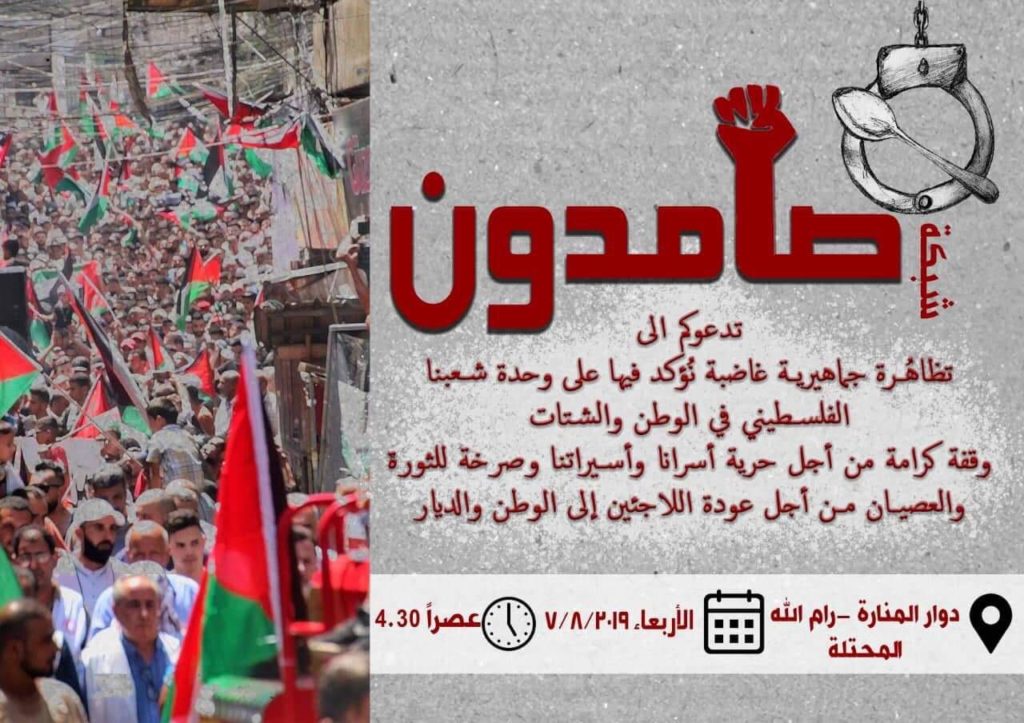 Samidoun Palestinian Prisoner Solidarity Network salutes Mohammed Abu Aker and Mustafa Hassanat on their victory over administrative detention. It is more urgent than ever that supporters and friends of Palestine everywhere around the world join people taking to the streets in Palestine to stand with these courageous prisoners who have put their lives on the line to seek freedom and an end to the unjust system of administrative detention. International solidarity can help them win their struggles, so all of our participation, protests and petitions can play a role in helping them to seize victory for justice and freedom.

1) Organize or join an event or protest for the Palestinian prisoners. You can organize an info table, rally, solidarity hunger strike, protest or action to support the prisoners. If you are already holding an event about Palestine or social justice, include solidarity with the prisoners as part of your action. Send your events and reports to samidoun@samidoun.net.

3) Boycott, Divest and Sanction. Join the BDS campaign to highlight the complicity of corporations like Hewlett-Packard and the continuing involvement of G4S in Israeli policing and prisons. Build a campaign to boycott Israeli goods, impose a military embargo on Israel, or organize around the academic and cultural boycott of Israel. Learn more about the BDS campaign at bdsmovement.net.