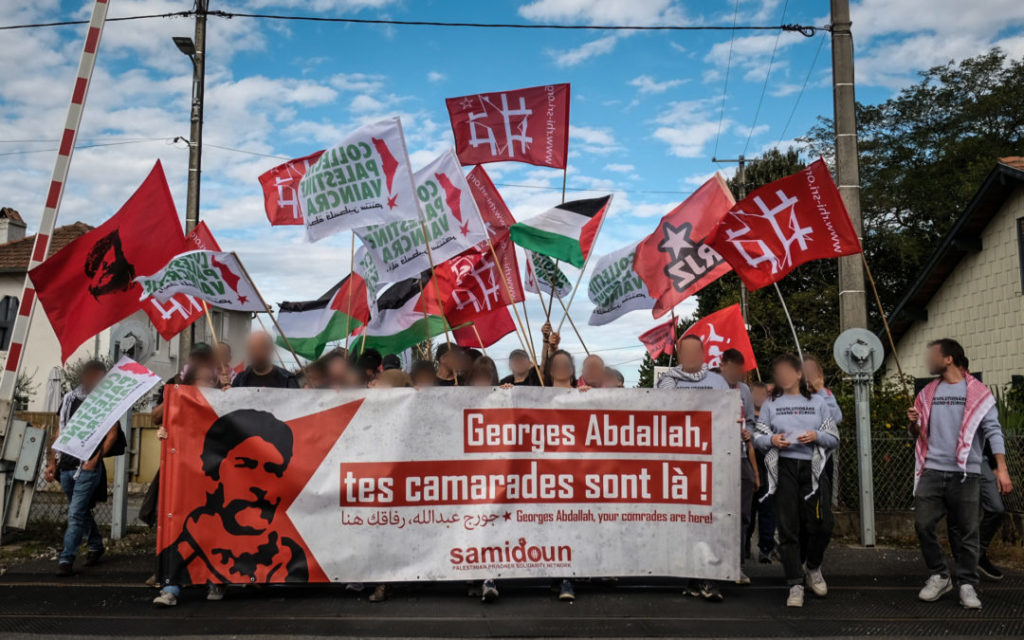 On Saturday, 19 October, over 500 people marched in Lannemezan to the gates of the prison where Georges Ibrahim Abdallah, Lebanese Arab communist struggler for the Palestinian cause, has been imprisoned by France since 1984. 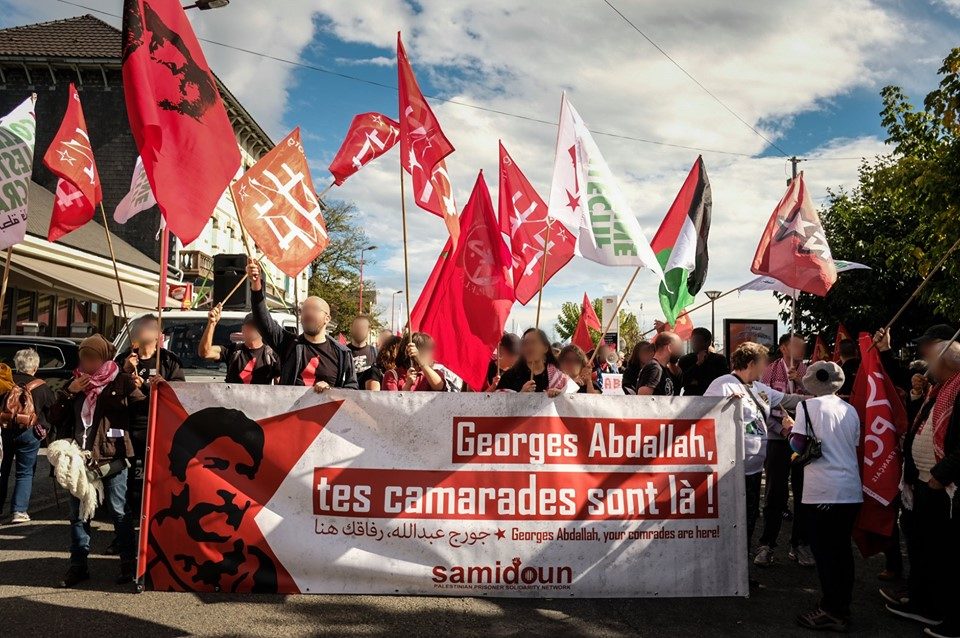 Many delegations and contingents participated in the march from the Lannemezan railway station to the prison for the annual demonstration, including participants from Tarbes, Pau, Bordeaux, Montpellier, Lyon, Marseille and Paris as well as international groups from Brussels, Milan, Naples, Zurich and elsewhere. 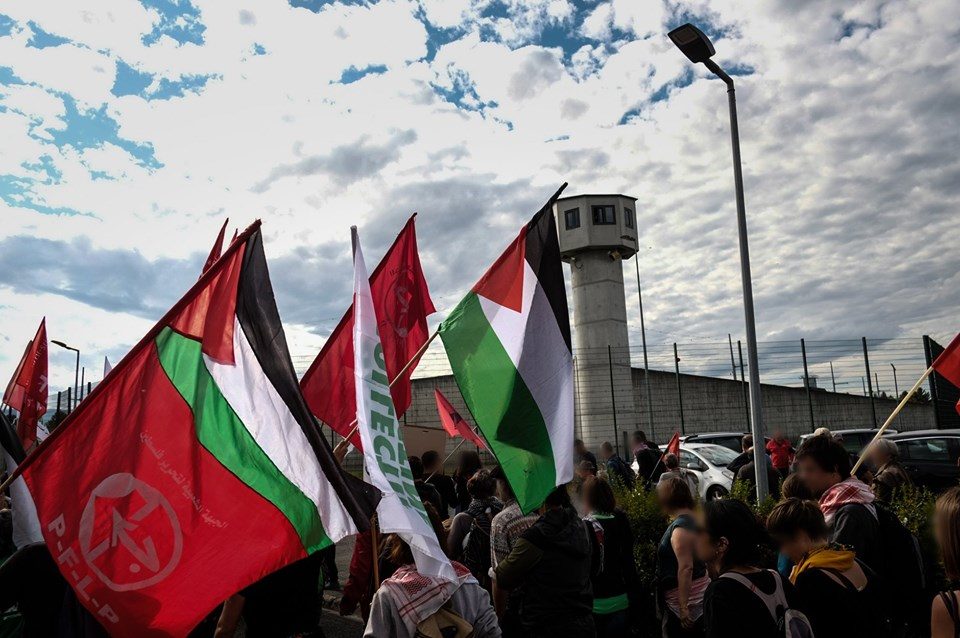 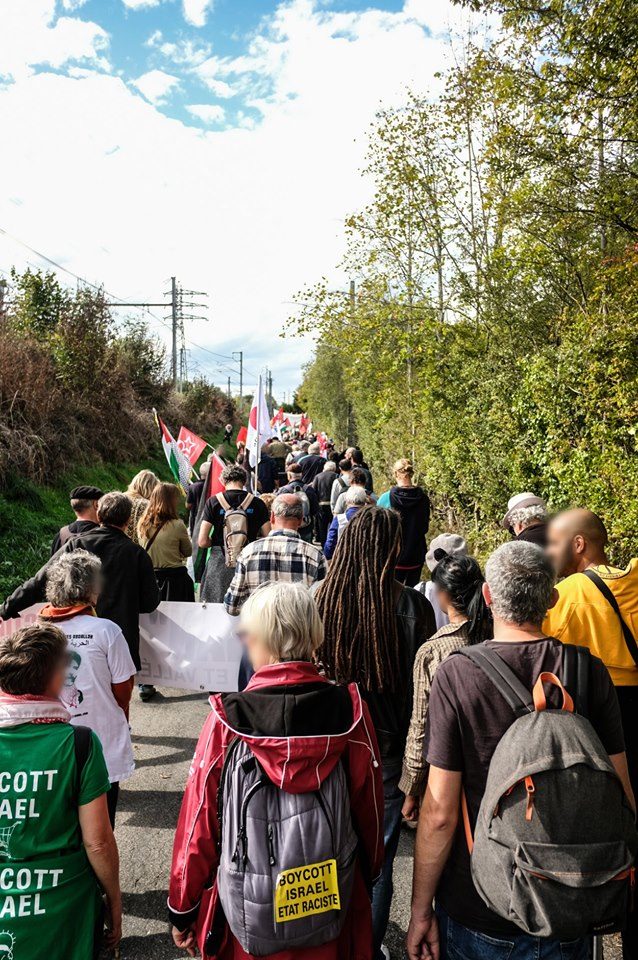 Marchers chanted slogans of liberation for Georges Abdallah, Palestine and all political prisoners as they rallied through Lannemezan, the vitality of the demonstration reflecting the strong support for Europe’s longest-held political prisoner. Many participants carried Palestinian flags as well as banners of the Popular Front for the Liberation of Palestine (PFLP), recalling Georges Abdallah’s commitment to the Palestinian resistance confronting imperialism, Zionism and Arab reactionary regimes.

The event included a lengthy rally outside the prison itself, with many solidarity statements being delivered on behalf of the growing movement demanding Georges Abdallah’s freedom. Participants hung banners on the prison gates, banged and shouted to be heard by the prisoners inside the walls. 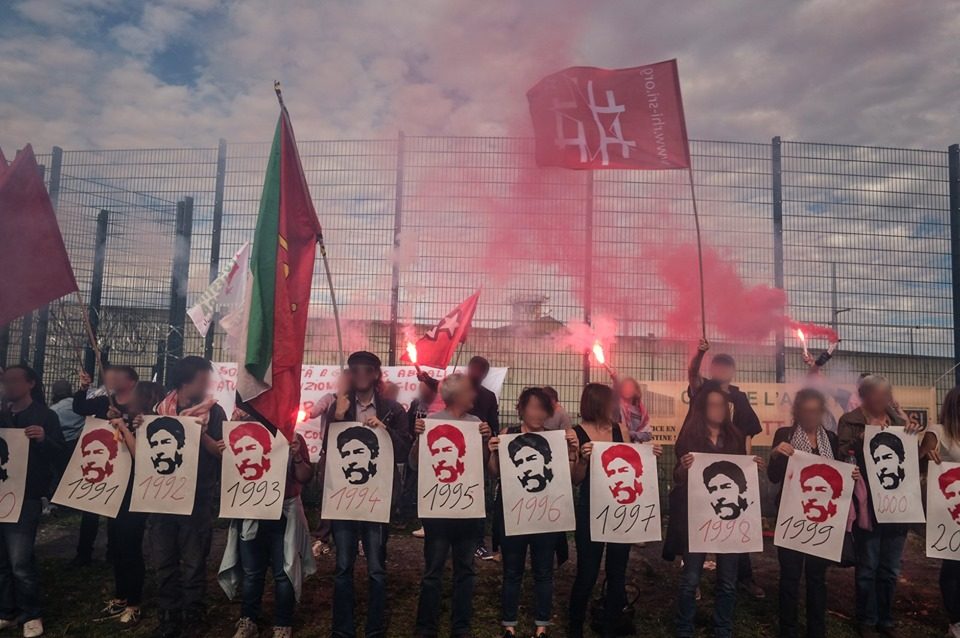 The rally opened with a statement from Georges Abdallah, who called for increased solidarity, noting that imprisoned strugglers are facing a “policy of annihilation targeting incarcerated revolutionary strugglers.” He emphasized the need for greater action for Palestine and the Palestinian political prisoners. 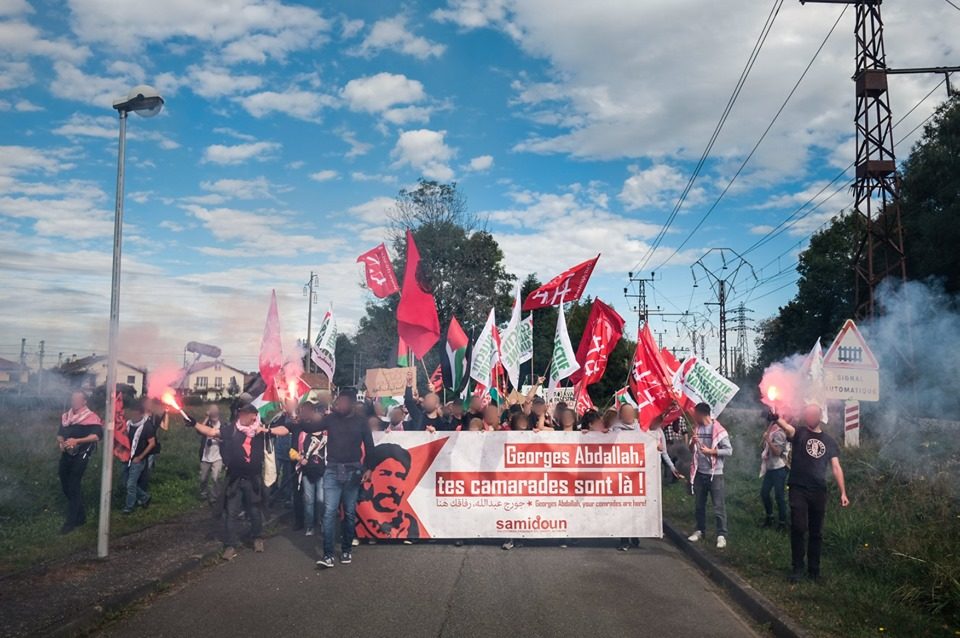 Collectif Palestine Vaincra is here in Lannemezan today to affirm once more our support for Georges Ibrahim Abdallah. We stand before the prison gates to emphasize the importance of the struggle!

Supporting Georges Abdallah means supporting the PAlestinian struggle against Zionism, imperialism and reactionary Arab regimes for the liberation of Palestine from the river to the sea. Collectif Palestine Vaincra supports the Palestinian resistance in all forms against the Israeli state, a Zionist settler-colonial entity. Our collective denounces and struggles against France’s support for the Israeli occupation.

Supporting Georges Abdallah also means recognizing the right of Palestinians to resist by all forms they judge necessary for his release, including armed struggle, struggle carried on for decades by Palestinian revolutionary left strugglers.

Supporting Georges Abdallah means recognizing and supporting the right of return of all Palestinian refugees. This fundamental right includes more than 5 million Palestinians fighting today to return to their land.

Supporting Georges Abdallah is also supporting thousands of Palestinian prisoners in the jails of the Zionist occupation. It is to support Ahmad Sa’adat, the imprisoned General Secretary of the PFLP, and also the students of Birzeit University and othe runiversities throughout Palestine held in administrative detention and undergoing interrogation by the Israeli intelligence and suffering under their well-known methods of torture.

Finally, supporting Georges Abdallah is supporting thousands of Palestinians in Gaza who every week defy the Israeli occupation and siege in the Great March of Return.

The resistance of the Palestinian people is legitimate, just as is that conducted by Georges Abdallah, imprisoned here in the jails of French imperialism. For 35 years, they have wanted to silence him. And for 35 years, he holds his head high and continues the struggle! So we must also continue our struggle, in support of Palestine and Georges Abdallah! 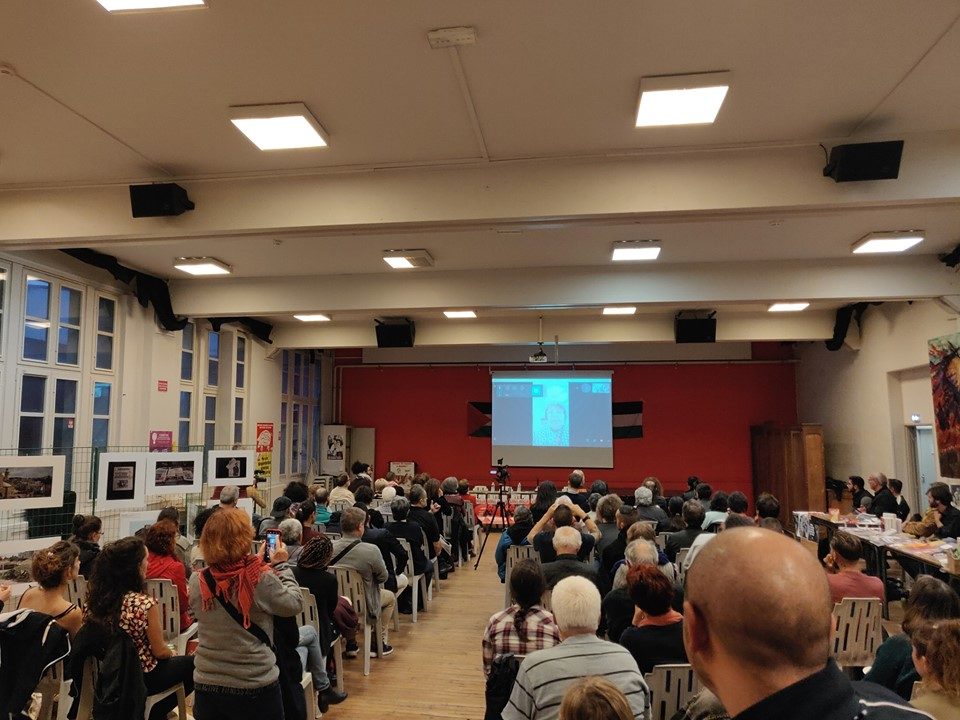 On the previous evening in Toulouse, a support rally for Georges Abdallah and the Palestinian cause gathered 120 participants, who heard presentations by Leila Khaled (via Skype), Mustafa Awad and Pierre Stambul. All affirmed their support for the Palestinian people and their resistance, the liberation of all Palestinian prisoners, the boycott of Israel and the immediate release of Georges Abdallah.