The following article by Asa Winstanley is republished from Middle East Monitor: 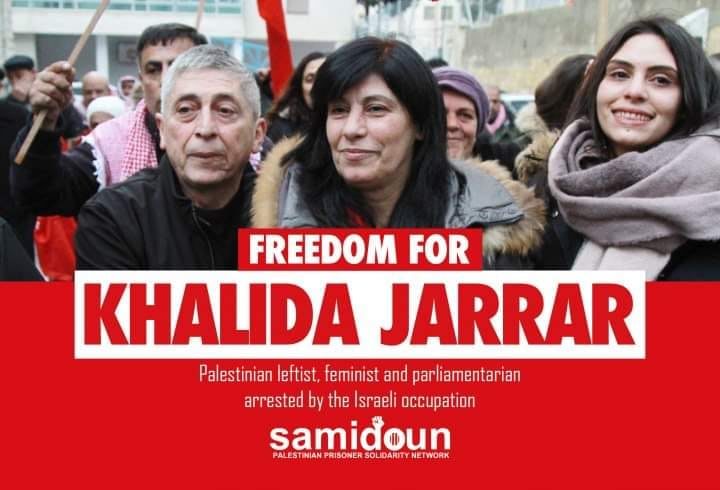 Khalida Jarrar is a leading Palestinian activist for women’s rights and prisoners’ rights. She is a socialist MP elected to the Palestinian Authority’s moribund legislative council, as part of the Marxist Popular Front for the Liberation of Palestine (PFLP).

All of this makes her an enemy in the eyes of Israel’s cruel and vindictive military occupation. The Israeli torture regime has had Jarrar in and out of prison for years now, with neither charge nor trial. Her latest “arrest” occurred last week when cowardly Israeli army thugs broke into her Ramallah home, in the occupied West Bank, and took her away at gunpoint.

Reading the latest update from her daughter Yafa, it is clear that Israel is imposing sleep deprivation on her, which is a common torture technique used by imperialist regimes and petty dictatorships the world over. “Mom appeared to be fatigued and exhausted from sleep deprivation,” she writes, relaying what her father saw for the brief few seconds he was allowed into Israel’s kangaroo court before the illegitimate military “judge” — in reality an army officer; for many years these fake judges did not have even the most basic legal training — sent Khalida Jarrar to prison. “She is still wearing the same clothes that she had on the night of her arrest,” says Yafa.

Now Jarrar is being held in isolation. This is nothing new for her. She was arrested arbitrarily and interned by Israel in 2015 and 2017. The whole nature of the terminology employed by Israel makes it sound legitimate — arrest, court, judge — when, in fact, it is entirely illegitimate. If actual legal processes were used, then arrest would be followed by charges, a proper trial and only then, if found guilty, a conviction.

The more accurate term to describe Jarrar’s “arrest”, therefore, would be “kidnapping”. For Palestinians Israel provides no semblance of a judicial system; justice has no role in the process. Instead, it implements a racist injustice system; one designed specifically to punish Palestinians for their very existence.

For example, Israel has a law on its books with allows it to intern Palestinians without charge or trial on the basis of so-called “secret evidence”. The law is a remnant of the British military occupation period, which ended in 1948. Under this law, internment without charge or trial – without any real evidence – is called “administrative detention”, a cruel euphemism if there ever was one.

It is essentially a system of summary military internment designed for use in wartime conditions, but Israel has enacted it on a permanent basis. It has been applied to Palestinians living under Israel’s brutal occupation for more than 71 years. From 1948 to 1966, Israel imposed this arbitrary military dictatorship on all Palestinian communities that remained within the new “state of Israel”, even after the majority had been driven out by Zionist militias, terrorist gangs and the nascent Israeli army between 1947 and 1949. Post-1967 up until today, the so-called “only democracy in the Middle East” imposes this military dictatorship on the Palestinians of the occupied West Bank, Jerusalem and Gaza Strip.

Israel is, by any standard, a racist, torture regime. It is important to emphasise that Israel’s military regime is a specifically racist one because, almost without exception, these military laws are applied to Palestinians only.

There are, in fact, two parallel legal systems operating under the Israeli regime in the West Bank. There is a civilian system which gives suspects the right to have a lawyer, due process and the usual standards of evidence, but it is for Israeli Jews only, and is denied to Palestinians purely and simply because they are not Jewish. The other is Israel’s system of military injustice, which has a 99.7 per cent conviction rate, and is applied to Palestinians alone. These parallel legal systems are the very embodiment of the Afrikaner word apartheid: “separateness”.

This is not some temporary, necessary condition of war. Military regulations, after all, are necessary under genuine conditions of defensive war, such as when Nazi Germany was bombing Britain during World War Two. Israel’s military regime is instead designed as a permanent, colonial system to oppress Palestine’s indigenous people indefinitely. It is intended to punish them simply for being Palestinians, with the objective that their lives will be made so miserable and difficult that they will leave their own land voluntarily.

This is a forlorn hope. The Palestinians have resisted this settler-colonial oppression for more than 120 years now, and will continue to so do for as long as they are denied their most basic rights.

“I will never stop speaking out,” Khalida Jarrar said in March this year. She had only just been released from her then most recent arbitrary detention in February. Now, she is back in an Israeli jail, one of 460 Palestinian political prisoners currently being interned without charge or trial by the Zionist state.

Jarrar’s family is emphasising that international pressure on Israel can make a real difference, and could help her to be released. The Palestinian prisoners’ solidarity group Samidoun is calling for action and has suggested some ways that people can take part in the campaign to free Khalida Jarrar. The best and most effective thing, though, would be to end the brutal Israeli occupation now.