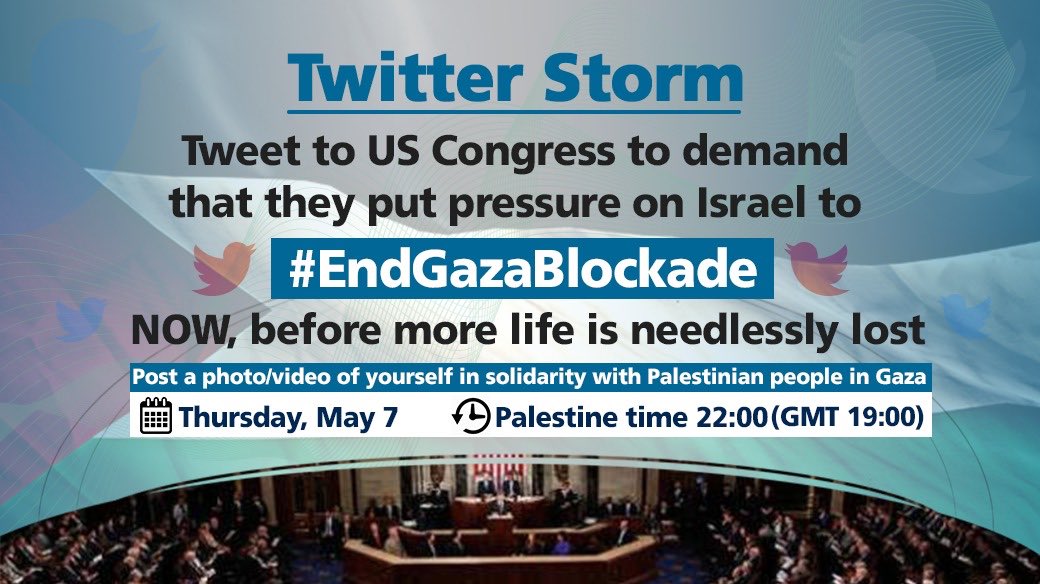 You are kindly invited to join a “new” type of Twitter storm on 07 May 2020 at 10 pm Palestine time, to demand #EndGazaBlockade amid the Covid19 pandemic – before an unprecedented catastrophe happens!

US Congress needs to be sensitized on:
(i) the urgency to lift the 13-year long blockade imposed on Gaza by air, land and sea, by Israel.
(ii) the anti-racist nature of our request, which highlights universal principles of justice

1. We are hereby calling on US activists, from all districts, to make a video/photo in solidarity with Gaza.

On the Twitter storm day, kindly tag your representatives in your tweet and send your prepared video/photo to them.

To find your Members of Congress’ Twitter accounts, visit TweetCongress. You can search by state or zip code to find your local representatives.

2. We are hereby calling on independent journalists and Human Rights groups to publish about the Twitter storm, and more importantly, about its outcome.

1. We will send a single message to each of the 535 US Congress members requesting them to pressure Israel to End the blockade on Gaza. (83 tweets in all, to be sent by ALL Palestine activists, not only by above mentioned US activists)

2. Alongside, US activists send their video/photo tweet, as explained above.

3. And, independent journalists and Human Rights groups publicize about the ongoing Twitter Storm and subsequently, on whether the Congress members do respond or not, on this demand to save 2 million Palestinians (including 800,000 children) from the Israeli blockade, and from the highly threatening Covid19 pandemic.

Should this campaign move the Congress members to take concrete actions, we will move on to sensitise and appeal UK MPs along the same lines.