On Tuesday, 2 June, the Israeli occupation military court in Ofer sentenced Palestinian American researcher Ubai Aboudi, the Executive Director of the Bisan Center for Research and Development, to 12 months in Israeli prison and a fine of 2,500 NIS (approximately $720 USD). Aboudi was initially abducted by Israeli occupation forces on 13 November 2019; he was held without charge or trial under “administrative detention” for two months, sparking an international outcry, especially among scientists and academics familiar with his work. Israeli occupation forces then transferred his case to the military courts, extending his detention.

His sentence will run 12 months from the date of his arrest, meaning that his release is scheduled for November 2020.

Aboudi, 36, is married to Palestinian writer and human rights defender Hind Shraydeh, who has tirelessly advocated for her husband’s release and for justice for detained Palestinians. They have three children, Khaled, Ghassan and Basil.

Shraydeh expressed her outrage at the unjust imprisonment of her husband: “Israel has been arresting and detaining key figures in Palestinian civil society and human rights organizations for decades. The Israeli military courts are yet another arm of Israeli repression of Palestinian civilians. These courts are unfair, lack proper due process and violate international human rights conventions. Israel doesn’t want Palestinians to work on building civic institutions even if they are as socially minded and promote education and gender equality, like the work Ubai was doing at the Bisan Center for Research and Development,” she emphasized.

“For Palestinians that are committed to peaceful means of improving our society, we are left with no options or opportunities to do so successfully. Ironically, the more successful a person or institution gets at doing their work, the more intensely they get targeted by Israel. Israeli terrorization of Palestinians as a people and Palestinian civil society as a whole and Israel’s continuous incitement against any support or sympathy for Palestinians shown by the international community is part of a systematic process aimed at forcing political solutions upon Palestinians that are counter to their interests and counter to justice.”

Prior to Aboudi’s arrest, he had been working with Scientists for Palestine to organize the Third International Meeting on Science in Palestine, which took place on 10-12 January 2020 at the Massachusetts Institute of Technology. He was also conducting research into the mechanisms used by the Israeli occupation to hinder Palestinian scientific development and suppress Palestinian academic research.

Hind highlighted this work as a particular target for Israeli repression: “I believe that Israel’s human rights violations are specifically directed towards Palestinians with strong relationships with international organizations aiming to implement progressive developmental change in Palestine. Israel silences people, muzzles their freedom of expression and the freedom to do academic research, weakens Palestinian infrastructure, and hinders any positive change civic institutions are attempting to effect – then incredulously asks ‘where is the Palestinian Mandela?'”

The military court sentence comes one day after an international campaign on social media using the hashtags #Freedom4Ubai and #Science4Palestine. Dozens of organizations – including Samidoun – and hundreds of activists around the world called for Aboudi’s immediate release, highlighting the injustice of his case. Approximately one million people were reached on Twitter alone, in addition to other social media campaigns on Facebook and Instagram and many direct calls made to the State Department in Washington, DC. One major campaign demand was for the U.S. State Department and its embassy in occupied Palestine to end their silence and inaction and instead act quickly to release Aboudi, a U.S. citizen, and to demand that the bogus charges against him be immediately dismissed. 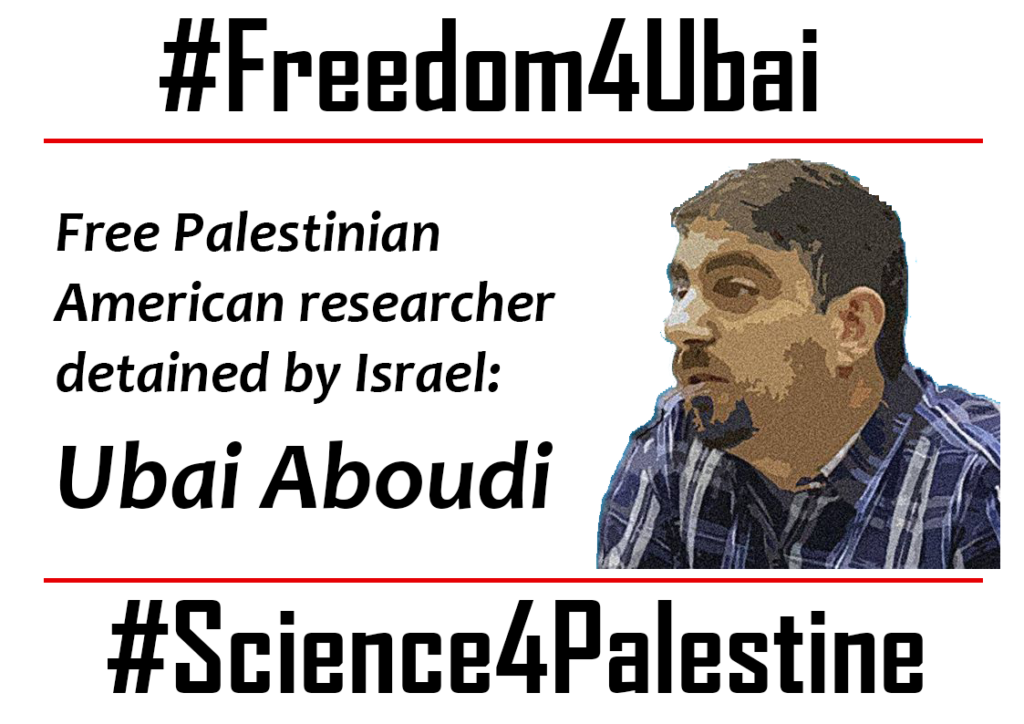 The campaign also highlighted the injustice of Israeli persecution of Palestinians, through “administrative detention,” imprisonment without charge or trial, as well as through the military court, where Palestinians routinely face bogus charges for social, political and cultural activities that are deemed “prohibited” by the Israeli military occupation. There are currently approximately 470 Palestinians held in administrative detention, and nearly 5,000 Palestinian political prisoners in Israeli jails.

Israeli military courts convict over 99% of the people brought before them, presenting a stacked deck in which it is nearly impossible to obtain any measure of justice. It condemned the U.S. government, which provides $3.8 billion annually in military aid to Israel, for its complicity in the ongoing imprisonment of a U.S. citizen and his rigged trial before a military court that entirely fails to comply with international standards for fair trials. It also highlighted the ongoing torture and abuse targeting imprisoned Palestinian women, men and children, including many university students as well as academics and researchers like Aboudi.

The campaign also comes alongside ongoing efforts by international scientists and researchers to demand the release of their colleague, spearheaded by Scientists for Palestine, which launched petitions signed by noted scholars such as Noam Chomsky and Nobel Prize winner George Smith. The Scientists for Palestine campaign highlighted Israeli violations of the internationally recognized right to science for Palestinians, urging that “S4P and the undersigned supporters therefore condemn Mr. Ubai Aboudi’s abduction and detention in the strongest possible terms and call for the US State Department and the US ambassador in Israel David M. Friedman to end their silence and work to ensure his immediate release from military prison.” Hundreds of academics added their names to the growing list of signatories.

Campaigners for Aboudi’s freedom and for justice for Palestinian political prisoners also highlighted the ongoing investigation by the International Criminal Court and the vast quantities of evidence cited by human rights organizations highlighting Israel’s war crimes and crimes against humanity, including its ongoing violations of legal due process, torture and abduction of Palestinian political prisoners and detainees. As Wattan TV, a Palestinian news agency, noted in its report on the case, “Palestinian detainees face a harsh reality…decisions that affect their lives come with a green light from the top of the political pyramid in the occupation state. These systems attempt to break the Palestinian prisoners’ will by subjecting them to sham courts, in order to undermine their resilience and steadfastness. Arrests may sometimes take the form of arbitrary and unjust administrative detention, based on secret files provided by the Israeli intelligence services. Detainees and their lawyers are forbidden from seeing these files. Detention orders may be issued for up to six months at a time, but they may be renewed indefinitely.”

The report noted further, “The occupation also buys time to manufacture charges and fabricate bogus hearsay evidence, as in Aboudi’s case. This is often based on coerced confessions obtained through the torture of other detainees under the “Tamir law,” which allows a Palestinian prisoner to be convicted in military court based on another’s confession under torture without external evidence or the detainee’s own confession. Hundreds of Palestinians are convicted each year in the Israeli military courts at a rate of up to 99.76%, under these circumstances.”

Because the system presents a stacked deck to Palestinian prisoners, in which the Israeli military occupation forces serve as the arresting force, prosecutor and judges, it is almost impossible to be acquitted in the military courts on the basis of legal argumentation or by challenging military evidence.

When Palestinian prisoners refuse a plea agreement, they face repeatedly postponed hearings that drag out over the course of years, as in the case of Mona Qaadan, who faced dozens of arbitrarily postponed military court hearings. In addition, Israeli military prosecutors routinely refuse to provide relevant evidence to defense lawyers, citing security and confidentiality. Once again, the Israeli military court system routinely refuses to grant relief in these cases, providing Palestinians and their lawyers with no opportunity to defend themselves.

One of the best-known cases is that of Mohammed Halabi, the Palestinian aid worker from Gaza, who rejected a plea agreement over the demands of the judge in his case, saying that he refuses to acknowledge false allegations. He has been imprisoned for three years and faced over 126 hearings, most of them postponements, with no meaningful progress in the case.

In many cases, each hearing for some prisoners also involve lengthy, arduous journeys on the notorious “bosta” as they are taken to and from the court on each occasion. These journeys take hours and days; prisoners are shackled to metal benches and frequently denied access to sanitary facilities.

In many cases, the sentence imposed in such a plea agreement is far shorter than the lengthy process of repeatedly postponed hearings. As a result, these delays are an additional form of coercion to force Palestinians to accept plea agreements, especially if they wish to continue their lives, care for their families and develop their work in the future outside Israeli prison. All of this is done in order to essentially force Palestinian detainees to end the legal proceedings in order to receive a sentence and a date for their release, especially as they have no hope of obtaining a fair trial.

Samidoun Palestinian Prisoner Solidarity Network condemns this latest injustice against Palestinian American researcher Ubai Aboudi, a daily experience in the Israeli military courts. We pledge to continue to fight for the freedom of Ubai and all of his fellow Palestinian prisoners in Israeli jails and to continue to confront the ongoing complicity of the United States, European Union, Canada and other imperialist powers in the dispossession of the Palestinian people, the torture and imprisonment of nearly 5,000 Palestinian political prisoners, including nearly 200 children, and the ongoing war crimes and crimes against humanity perpetrated by the Israeli settler colonial regime in Palestine for over 72 years.

Despite all of the injustices imposed on Ubai Aboudi and his fellow Palestinian prisoners, they are not isolated and they are not alone; they are an example of steadfastness and commitment to justice that inspires all of us around the world, including as we fight against anti-Black racism, police oppression and mass incarceration in our cities and communities. It comes as no surprise that the same U.S. regime that was built on the genocide of Indigenous people and the enslavement and exploitation of Black people and that terrorizes people around the world through its imperial military also works hand in glove with its settler colonial strategic partner, the Israeli state, to imprison and target Palestinians – including U.S. citizens and esteemed researchers like Ubai Aboudi.

We will not rest until we bring an end to these systems and structures of injustice, occupation, apartheid and oppression, in occupied Palestine, in the U.S. and everywhere around the world.

Freedom for Ubai Aboudi and all Palestinian prisoners! Freedom for Palestine, from the river to the sea!