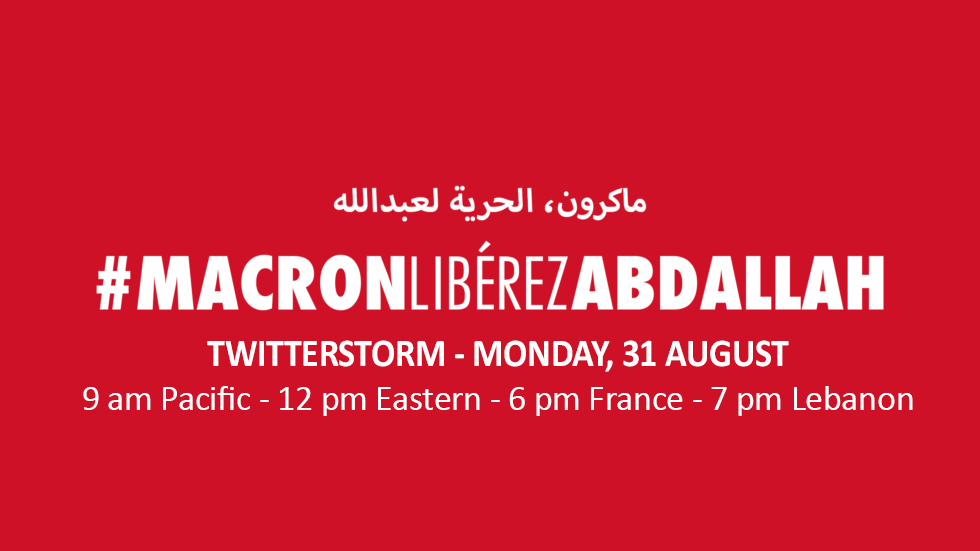 Translated from the French at Collectif Palestine Vaincra:

On Monday, 31 August, join the campaign to free Georges Ibrahim Abdallah, the Lebanese Arab Communist struggler for Palestine imprisoned in French jails for over 35 years, by participating in the Twitterstorm: #MacronLibérezAbdallah (Macron Free Abdallah)

The Twitter campaign coincides with the occasion of the arrival of French president Emmanuel Macron in Lebanon; his last visit was marked by colonial demands for a “new political pact” in Lebanon. France is the former colonial power in Lebanon that was responsible for creating the sectarian political system that persists to the present day.

When campaigners for Georges Abdallah’s freedom confronted Macron in the streets of Beirut during his previous visit to Lebanon following the port explosion, he responded with a mysterious phrase, “He must sign.” Abdallah, imprisoned in France since 1984, has been eligible for release since 1999. His release has been blocked by high-ranking French officials – hand in hand with U.S. officials, who have openly intervened in the case – on several occasions.

In a recent statement, the Unified Campaign for the Release of Georges Abdallah in Ile-de-France noted, “If there is one critical signature on this file, it is that of the Minister of the Interior. Despite being granted release successfully in 2003 and 2013 by the sentencing court and a written affirmation of his favorable reception in Lebanon, the release of Georges Abdallah remains contingent on the Minister signing an expulsion order from France. In January 2013, Manuel Valls, Minister of the Interior, refused to sign it; on 5 November 2014, his new request for release was declared “inadmissible” because he had not previously been the subject of an expulsion order. So yes, today, if there is a signature to be made, it is that of the President of the Republic ordering the Minister of the Interior to sign off on the document so that justice may finally be served and Georges Abdallah is released. He must sign!”

During the new visit of Macron to Lebanon, we must mobilize widely and make the release of Georges Abdallah more topical and relevant than ever. Samidoun Palestinian Prisoner Solidarity Network joins with the Collectif Palestine Vaincra to invite all to join the campaign on Monday, 31 August at 9 am Pacific time, 12 pm Eastern time, 6 pm central Europe/central Africa, 7 pm Lebanon time on Twitter. 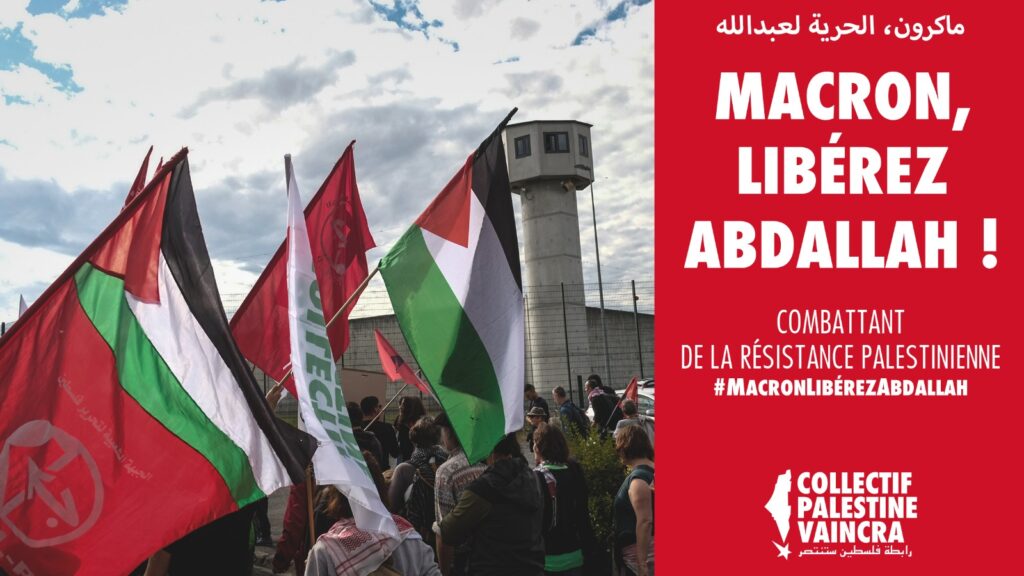 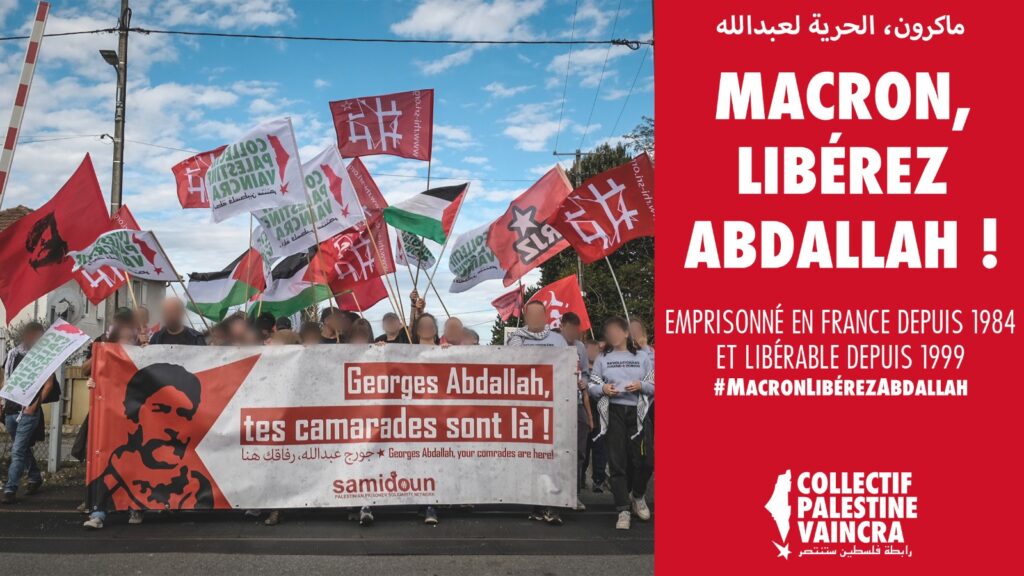 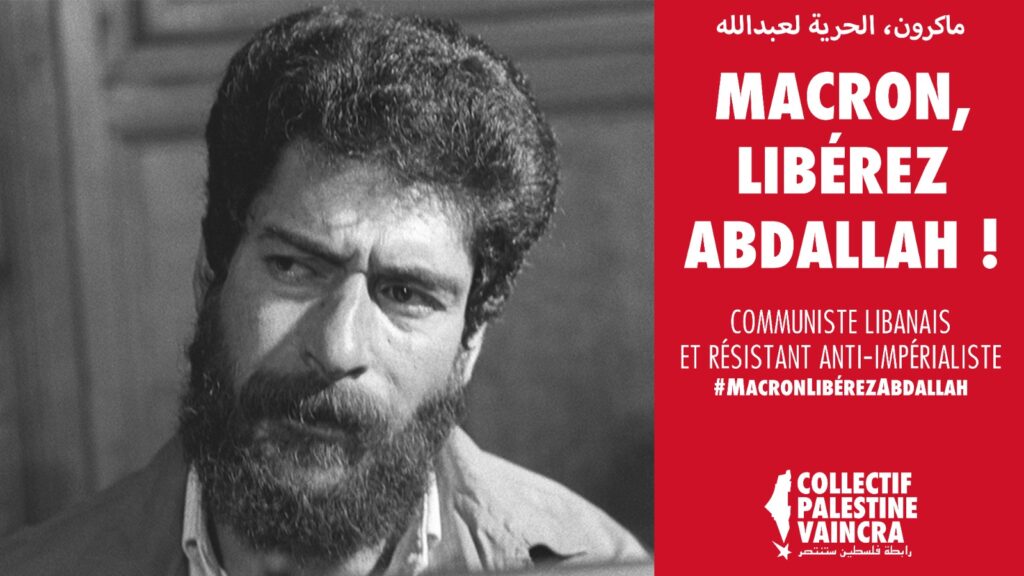 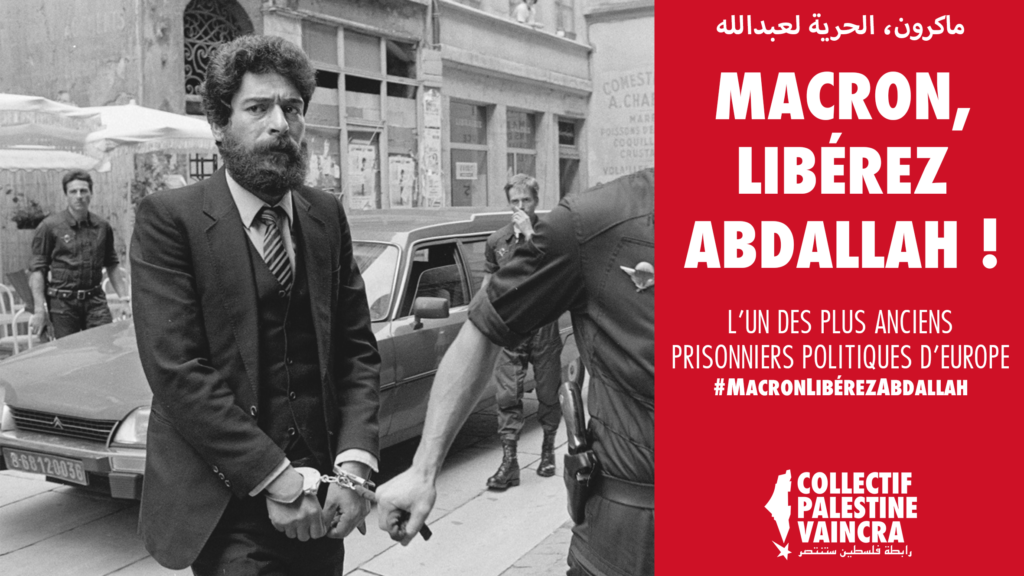