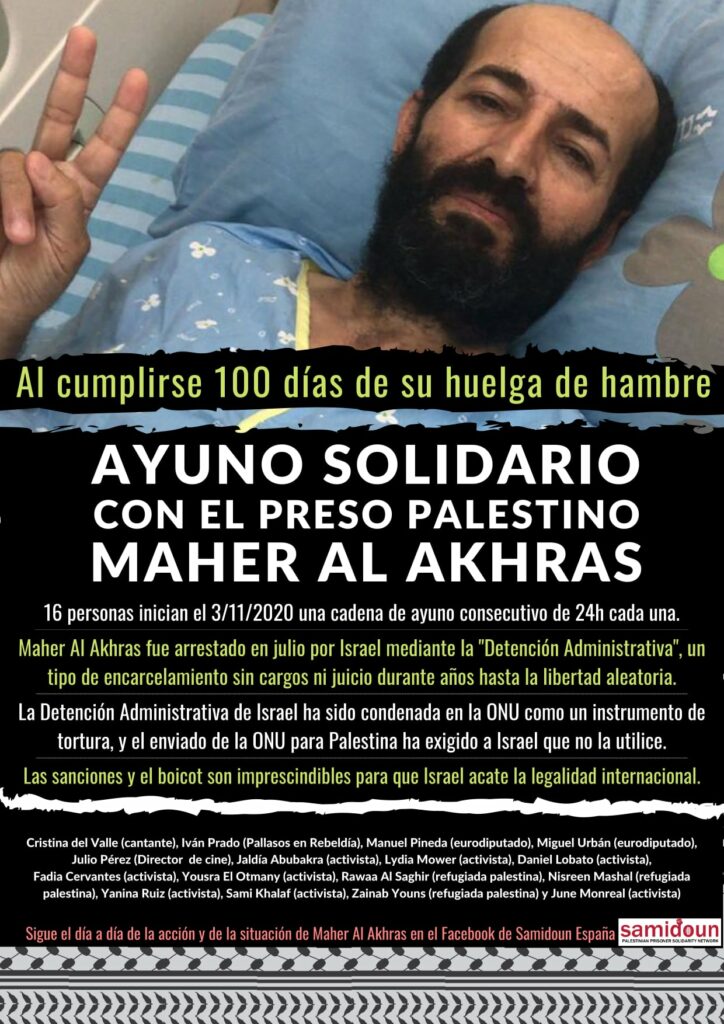 On Tuesday, 3 November, the singer Cristina del Valle will begin a chain of consecutive one-day hunger strikes that includes sixteen people (members of European Parliament, cultural workers and performers, activists and refugees) in solidarity with the Palestinian prisoner Maher Al-Akhras and with all Palestinian political prisoners.

As the strike was announced, Maher Al Akhras is completing his 100th day of hunger strike, marked by a very serious deterioration in his physical condition. He was arrested in July by Israel through “administrative detention”, a type of imprisonment without charges, or trial, without meaningful legal defense and often denied legal visits. Israel can extend this detention for years until the Palestinian prisoner is finally freed at a time randomly decided by the Israeli military authorities.

In other cases, after spending a long time in this unjust regime, the prisoner is finally referred to the military courts, which Israel concludes with an almost 100% conviction rate. Maher Al-Akhras has in the past spent more than two years in prison under administrative detention, also without trial or charge, until Israel released him. There are currently 350 people in this type of incarceration, among 4,400 Palestinian prisoners, including 155 minors.

Israel’s policy of administrative detention has been condemned in the UN Committee against Torture, and the UN Special Rapporteur for Palestine, Michael Lynk, has demanded that Israel not use it: “Administrative detention is incompatible with democracy, allows a state to arrest and detain a person without charge, without trial, without hearing the evidence against him, and without a fair judicial review. It is a penal system aimed at abuse and mistreatment ”, he said.

The solidarity action of rolling one-day hunger strikes will launch at 9:00 p.m. on Tuesday, 3 November by the singer Cristina del Valle, and the activist Jaldia Abubakra will take over on Wednesday. From there, activists and Palestinian refugees will engage in the successive one-day strikes, along with the winner of the Goya awards (Spanish annual films awards) for the short film “Gaza”, Julio Pérez del Campo, the coordinator of Pallasos en Rebeldía, Iván Prado, and Members of European Parliament Manuel Pineda and Miguel Urbán.

At the end of the individual day of fasting, each person will share a video with their impressions of the solidarity action and the situation in Palestine. All of them affirm that boycott, divestment and sanctions are necessary to force Israel to comply with international law, as was the case with the Apartheid regime in South Africa.

This action is promoted by the organization of solidarity with Palestinian political prisoners, Samidoun, and the day-to-day action can be followed on the Facebook of Samidoun Spain.

At the end of the last shift, on Wednesday 18 November, a social media event is planned, all depending on the situation of Maher al-Akhras at that time.. 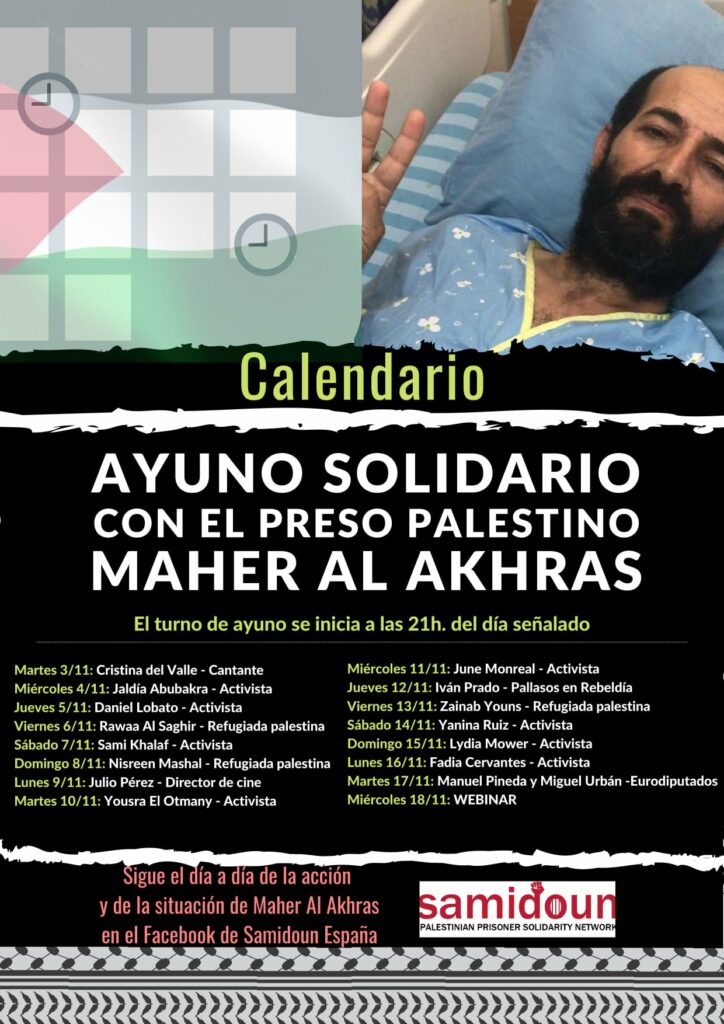