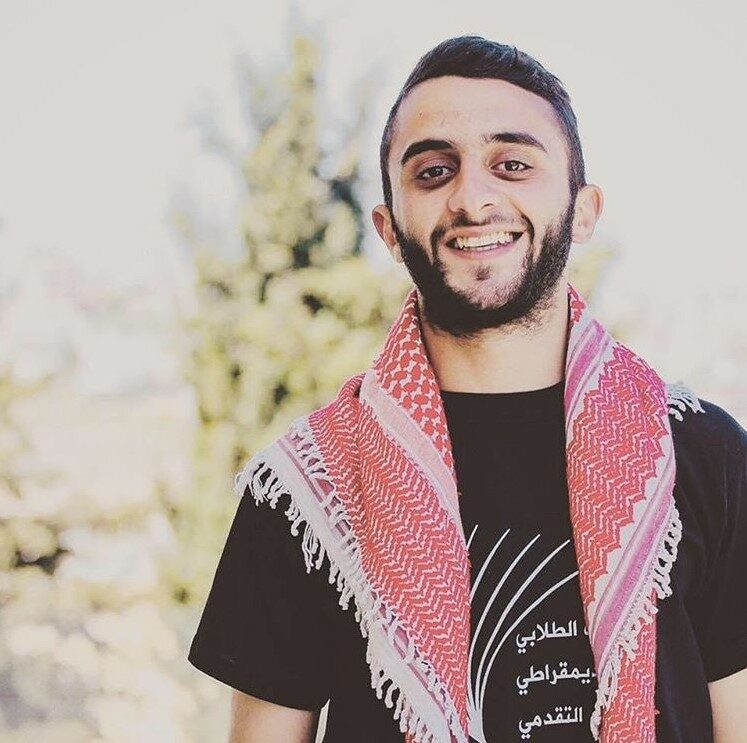 Palestinian student prisoner Ameer Hazboun was sentenced by an illegitimate Israeli military court on Monday, 9 October to 16 months in Israeli prison and a fine of 3000 NIS ($890 USD/$750 EUR). He has been detained since 11 September 2019 and his military court hearings have been repeatedly delayed and postponed.

He was subjected to severe torture under interrogation at al-Moskobiyeh interrogation center before being charged with, essentially, being a Palestinian student activist: he was accused of membership in the Progressive Democratic Student Pole, a leftist student bloc at Bir Zeit University recently labeled a “prohibited organization” by the Israeli military occupation command, attending student events and organizing student activities on campus. In fact, distributing flyers for a student election campaign was labeled “aiding an illegal organization.”

A fourth-year engineering student at Bir Zeit University, Ameer was seized by soldiers in his dormitory on 10 September 2019 as they invaded his room at 1:00 a.m. He was brutally kicked beaten by the soldiers with their guns while being transported to the Moskobiyeh interrogation center. He arrived at the center with bruises all over his body and informed the prison doctor that he has a platinum plate in his left hand for a previous injury. He was interrogated for weeks on end for 22 hours a day. Due to severe sleep deprivation, he would sometimes fall asleep during interrogation and was shaken awake by the interrogators. He was forced into multiple stress positions, including being forced to stand on his toes with his hands cuffed overhead to the wall, placing severe stress on his feet, arms and injured hand.

Ameer is one of hundreds of Palestinian university students – including dozens from Bir Zeit University alone – imprisoned by the Israeli occupation and attacked for their student activities. Freedom for Ameer Hazboun and all imprisoned Palestinian students!