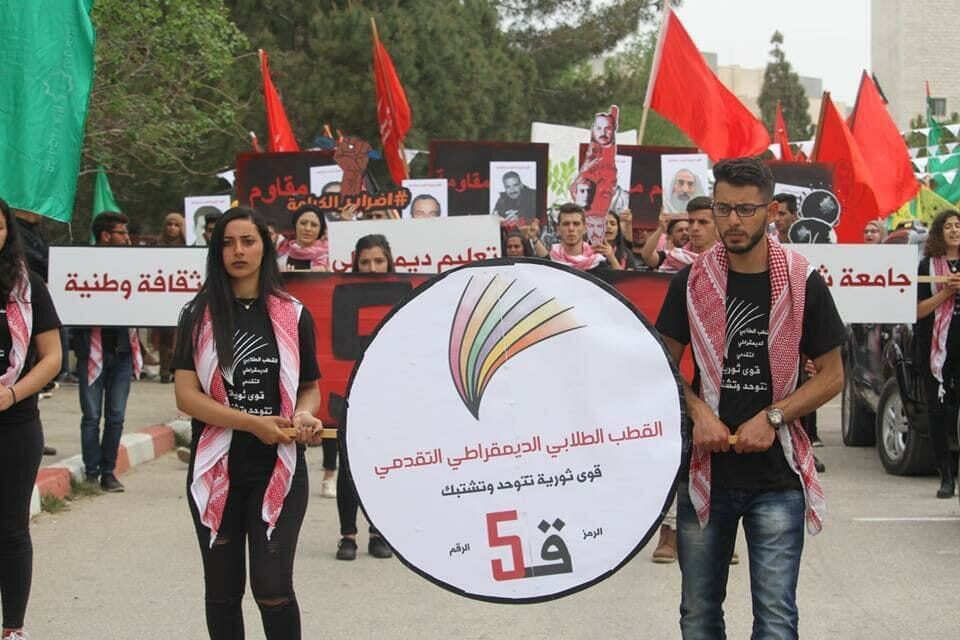 The Israeli occupation escalated its attack on the Palestinian student movement on Wednesday, 21 October, officially labeling the Democratic Progressive Student Pole, the leftist student bloc at Bir Zeit University, a prohibited “terrorist” organization. These arbitrary designations may be issued at any time by an Israeli military commander of occupation forces in the West Bank, and are used as a pretext to round up, detain and violently attack Palestinian organizations and movements. Almost all Palestinian political parties are similarly labeled by the Israeli occupation.

This designation follows a widespread campaign of attacks and arrests against student activists at Bir Zeit University and elsewhere throughout occupied Palestine. Hundreds of Palestinian university students are behind bars, with dozens of those students from Bir Zeit University.

Samidoun Palestinian Prisoner Solidarity Network expresses its strongest solidarity with the Democratic Progressive Student Pole and the Palestinian student movement more broadly. This attack is not only a direct attempt to criminalize student organizing in the occupied West Bank of Palestine, it is also an attempt to criminalize Palestinian students in 1948 occupied Palestine and prevent interaction, joint organizing and collective struggle.

These attacks and the imprisonment and targeting of students also cannot be separated from the attempts to suppress Palestinian and Palestine solidarity organizing on university campuses around the world, including the shutting down of events, government intimidation and pressure, and outright censorship of advocacy for justice for Palestine.

To join actions and discuss plans for November solidarity actions for Palestinian students, please contact us at samidoun@samidoun.net.

On October 23, we urge North American campus activists to join the USACBI day of action against campus and tech company repression of Leila Khaled and Palestinian speech generally.