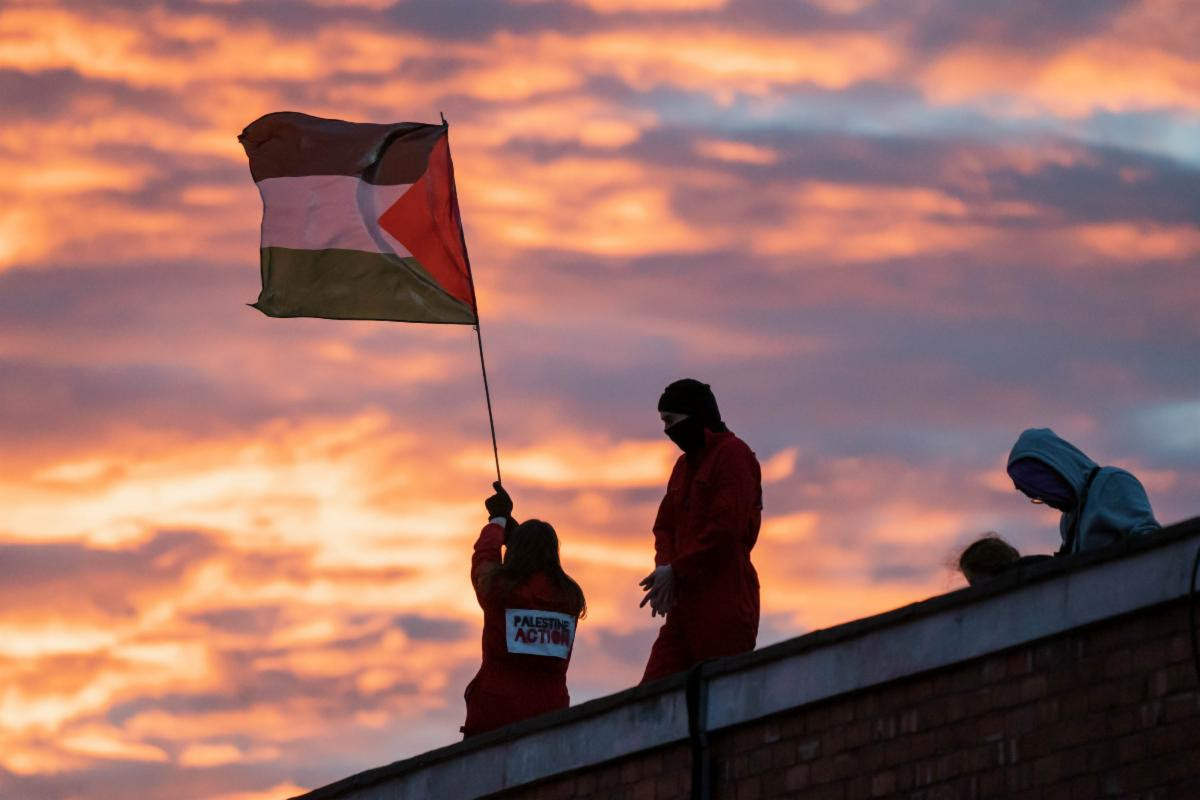 The following statement is republished from Palestine Action.

Since being arrested for occupying Elbit’s death factory in Shenstone yesterday, the 6 activists have been detained for longer than the legal 24-hour period, still without charges. Alongside this illegal detention, each activist has had their homes raided. It is unknown at this time whether their devices have been seized.

Police have just raided the homes of the detained activists and we call on everyone to join and support the resistance — https://t.co/epVKn01MNT pic.twitter.com/FfS10ANzEt

Police claim that the activists have caused substantial damage to Elbit Systems, but this pales in comparison to the damage that Elbit causes in the murder of innocent Palestinians.

Arriving before dawn, the 6 activists took over the covertly branded UAV Engines, a feeble attempt at covering up their reputation as war criminals. Police arrived on the scene and began by harassing a journalist with a press card, arresting them and disallowing them to film the occupation.

.During the occupation, the police brought a cherry-picker to transport them to the ground in order to arrest them. Activists sprayed this cherry-picker with the red paint used on the face of Elbit’s building, signifying the Palestinian blood spilled by Elbit’s drones and military technology. Windows, cameras and vents were smashed, their gates were chained shut, whilst the 6 activists stormed the building and occupied it in the name of Palestinian resistance.

This is the fourth time we’ve shut down Elbit’s factory in Shenstone in six months, only weeks after our occupation of Elbit-Ferranti with Extinction Rebellion North. We will not stop until Elbit is shut down.

Our persistence and determination in direct action sends a clear message to the immoral war mongers that profit off crimes against humanity. We will not stop until Elbit is chased out of the UK, and their murderous operations stop for good.

All 6 integrous Palestine Actionists who #ShutElbitDown today are being unjustly held in police custody in Stoke-on-Trent #Respect pic.twitter.com/5iorMRcYjr

Please support the resistance by donating directly toward more factory shutdowns like what has happened in Shenstone again, by clicking the link!

Together, we will resist and we will win!

Several activists from Palestine Action are occupying the roof of an Israeli-owned arms factory based in Shenstone, Staffordshire, and have blocked the entrances from the ground; forcing the site to halt its production of deadly weapons.

Arriving before dawn on Tuesday, activists took over the Elbit Systems factory, which is covertly branded as UAV Engines. They chained its gates shut, stormed the factory grounds, poured blood-red paint down the front of the building, smashed windows, sprayed the car park red, and displayed banners reading ‘Shut Elbit Down’ and ‘Elbit Arms: Israel Kills’.

Palestine Actionists arrested after they successfully #ShutElbitDown & brought its death factory to its knees | donate at https://t.co/epVKn01MNT pic.twitter.com/2YZAWzNozR

…The action comes after a three-day rooftop occupation last September that cost the company an estimated £145,000 in damages. There have been other similar ‘shutdowns’ by Palestine Action in November 2020 and January 2021.

Today’s factory closure is the group’s second large-scale action this month: on 1st February, Palestine Action joined forces with Extinction Rebellion North to occupy Elbit-Ferranti in Oldham for 16 hours, in what was described as the “first of many” collaborations.

A member of Palestine Action said about today’s occupation:

“We’re back, and this is once again, a clear and unwavering message to the immoral profiteers of war and the perpetrators of crimes against humanity that we’re not going away until Elbit’s lethal chain of weapons factories are hounded out of the UK. Petitioning and protests don’t work, so it’s our moral obligation to take matters into our own hands and use direct action to shut these death factories down for good.”

I'm a pensioner; I don't want to smash Elbit up, but it bombs people to death. I'm doing something about it; why don't you? #ShutElbitDown pic.twitter.com/WvbhW0Kh7j

Elbit Systems produces surveillance technology for Israel’s illegal apartheid wall and the engines for 85% of its military drones, among other weapons components. Its drones, which include the Hermes 450 and its later 900 model, were employed extensively during the 51-day attack on Gaza in 2014, which killed over 2,200 Palestinians, including 551 children.

Elbit markets its products as “battle-tested” and claims “outstanding capabilities” based on ”operational experience” gained from the experimental use of its weapons on the population of Gaza, around 50% of whom are children.

Over the last 16 years, Elbit has established a large presence in the UK, opening 10 production sites across England and Wales, including four factories. Since 2018, the UK government has bought £45m worth of military equipment from the company despite its role in aiding and escalating Israel’s war crimes in order to maintain its illegal occupation of Palestine and sustain its brutal system of apartheid.

In January, Britain’s Ministry of Defence gifted the company with a £102 million contract to develop new surveillance technology to enable “frontline” soldiers to detect and accurately fire on alleged “enemy” targets in a matter of seconds.

Palestine Action, which launched in August 2020, is working to shut Elbit’s UK-based war industry down and has collectively hit the firm’s sites around 50 times in just 6 months, also targeting its London landlord, LaSalle Investment Management.

Actions have caused Elbit’s factories to close on five separate occasions, while a series of occupations and well-attended public protests at its London HQ has disrupted the company’s business-as-usual complacency and raised considerable public awareness.

Palestine Action is a direct-action network of groups and individuals formed with the mandate of taking direct action against Elbit Systems’ UK locations at a grassroots level, calling for them all to be shut down and for the British Government to end its complicity in Israeli apartheid.