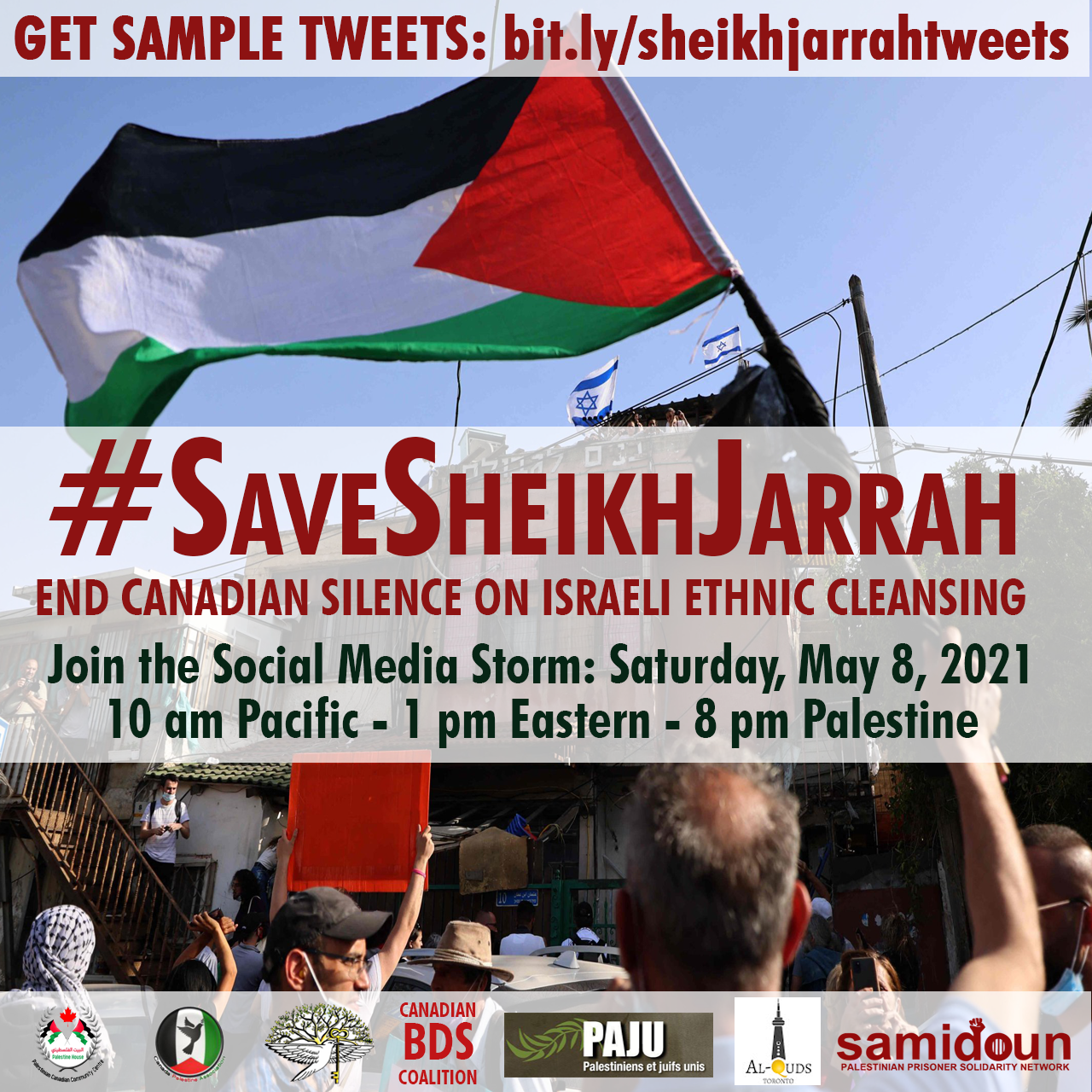 #SaveSheikhJarrah
Demand Action and Accountability from the Canadian Government

In occupied Jerusalem, Palestinians from the neighbourhoods of Sheikh Jarrah and Silwan are threatened with imminent expulsion and violent forced eviction from their homes by the Israeli occupation regime.

This is part of the ongoing Nakba in Palestine — the ongoing Israeli plan to dispossess Palestinians from their homes and land and perpetrate ethnic cleansing in Jerusalem and throughout Palestine. Instead, the Israeli regime seeks to replace Jerusalem’s Palestinian population with illegal Israeli right-wing extremist settlers.

On May 2, the Israeli high court replied to the ongoing legal efforts of the people of Sheikh Jarrah. Rather than stopping this injustice, the court first ordered them to make a deal with the illegitimate, exclusivist Jewish settlers attempting to force them from their homes, and then postponed a further ruling until May 10.

Right-wing settler mobs have rampaged through Sheikh Jarrah in the past days, screaming “Death to Arabs” and attacking Palestinians. Settlers attacked Palestinians breaking the Ramadan fast during Iftar, pepper spraying them and throwing rocks at them. Working hand in hand with these violent settlers, the Israeli military has attacked residents, sprayed skunk water and tear gas throughout the neighbourhood, invaded homes, assaulted women, children and elders and seized dozens of Palestinian youth defending their own homes.

Meanwhile, the Canadian government has done nothing to uphold the human rights of Palestinians in occupied Jerusalem. Instead, it declared its commitment to protecting Israel from international scrutiny for its crimes, noting that it would boycott a United Nations anti-racism conference anniversary event because that event highlighted Israeli racism and apartheid. Today, Israel’s apartheid regime is even clearly recognized by Human Rights Watch, and Israel’s war crimes and crimes against humanity are under investigation by the International Criminal Court. It is time for this shameful silence to end.