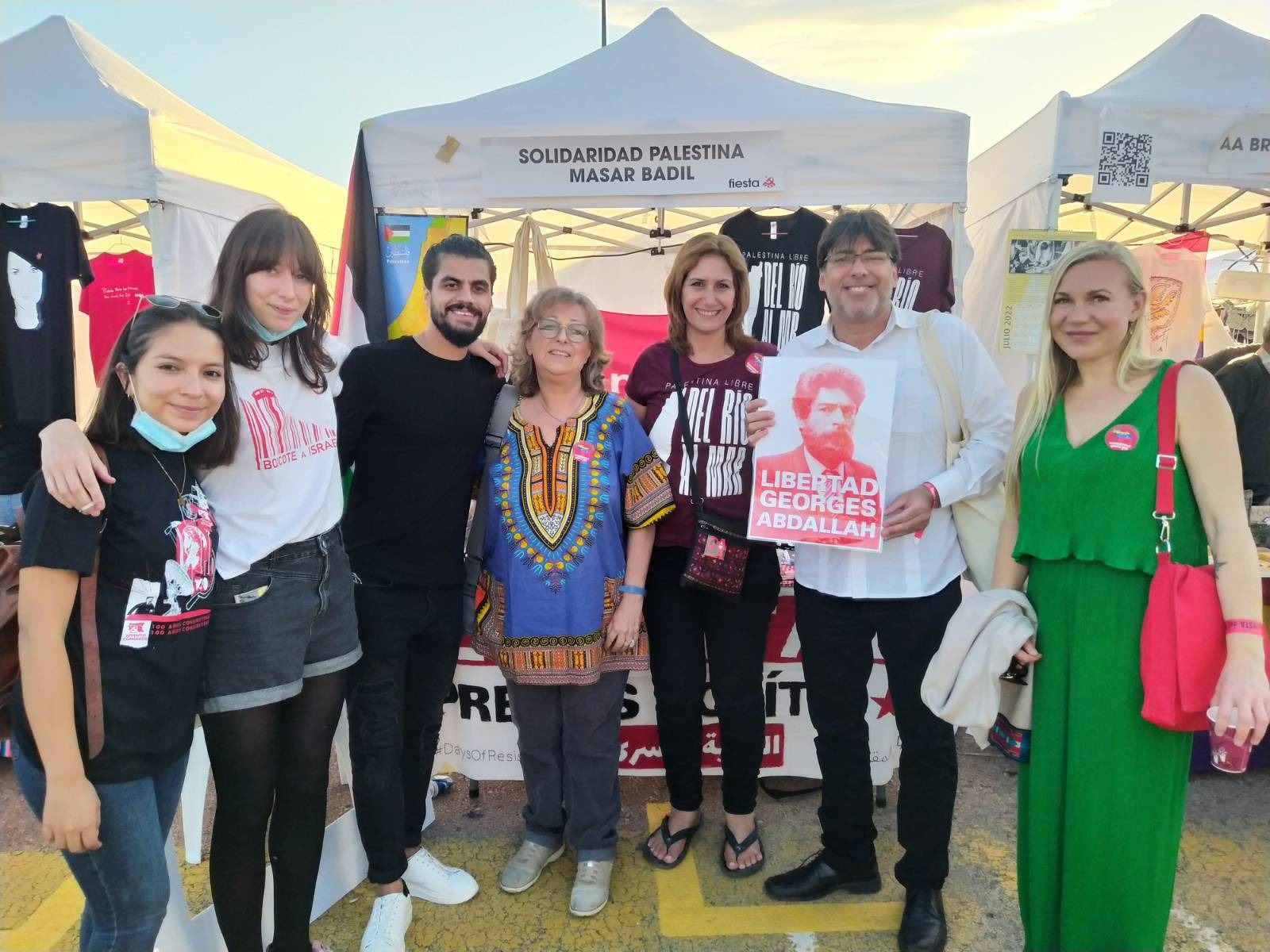 From Friday 24 September to Sunday 26 September, the activists of Samidoun Palestinian Prisoner Solidarity Network in the Spanish State (Samidoun España) were present at the Fiesta festival, marking the centenary of the Communist Party of Spain, in the municipality of Rivas Vaciamadrid.

The presence of Samidoun Spain was crucial during these important days, which served as a meeting point for a wide range of political activists and organizations of the left in the Spanish State. During the event, Samidoun organizers had the opportunity to converge with many other national and international social movements, with internationalist activists, political parties, as well as with fundamental political and artistic personalities of the Spanish, Latin American and international left in general. 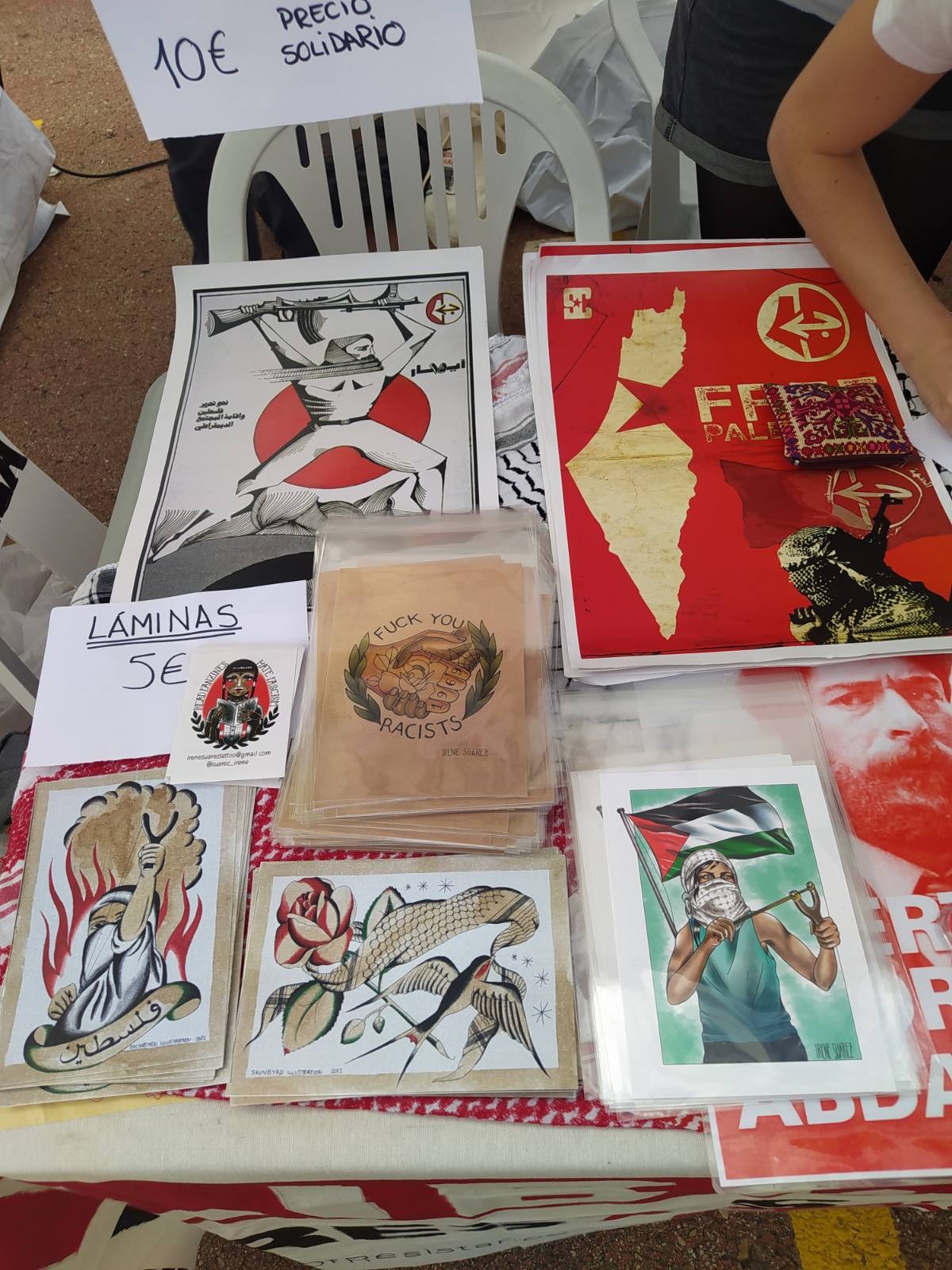 Comrade and activist Jaldía Abubakra participated in the internationalist space in a forum on the Arab region with Jon Rodríguez Forrest, responsible for International Relations in Izquierda Unida (United Left), Sira Rego, MEP of UP-IU (Unidad Podemos – Izquierda Unida) in the Confederal Group of the European United Left, spokesperson of IU and Head of External Area of IU, and Abdullah Arabi, Delegate of the Polisario Front in Spain. During her speech, she emphasized the need for Palestinian struggle to break with the disastrous path of Oslo for a new stage of resistance and building a strong Palestinian national front that advocates real decolonization and not collaboration with the Zionist colonizer. 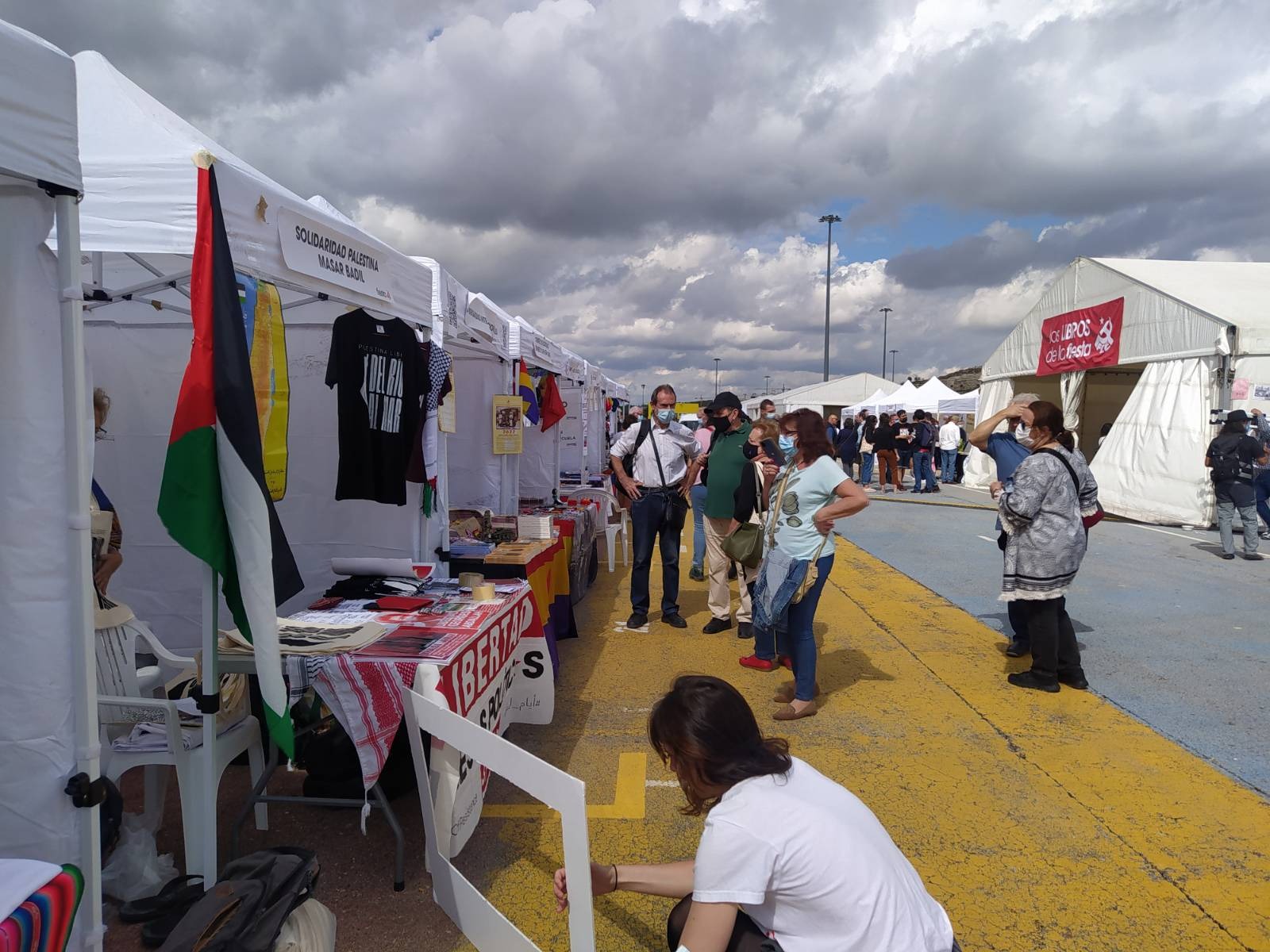 Samidoun Spain coordinated with other political forces to continue to strengthen support for the Palestinian struggle and resistance for the liberation of Palestine. The event also provided the opportunity for three full days of raising awareness and involvement for Palestine among all of the guests who came to enjoy the cultural events or other political and social activities organized by the Communist Party of Spain. 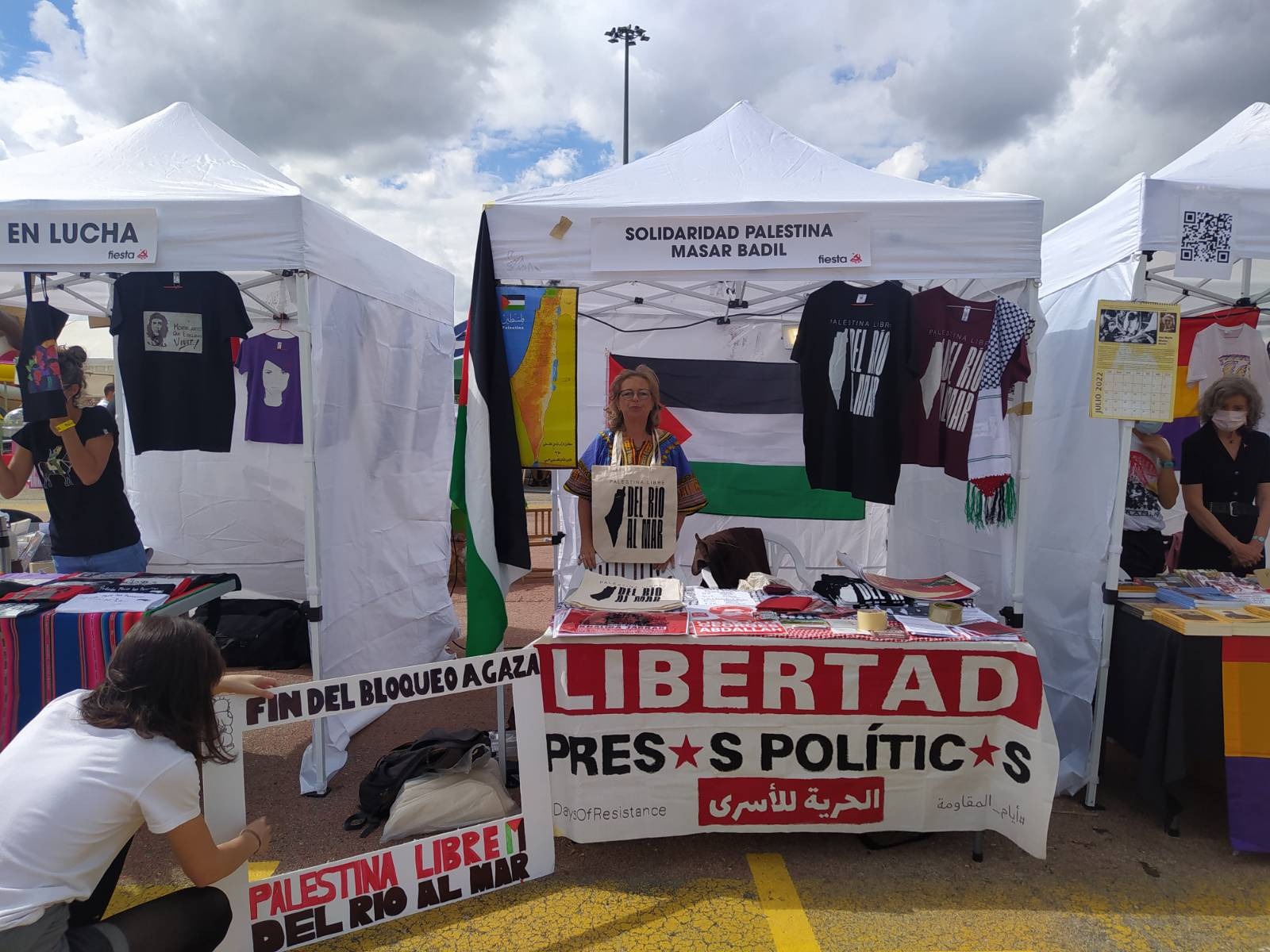 Throughout the weekend, Samidoun activists at their information and materials stand distributed information leaflets about the campaign to boycott Israeli pharmaceutical company TEVA and other Israeli products and institutions; about the urgent situation of Palestinian political prisoners in Zionist prisons; the Israeli colonization of Palestine and the need to free Palestine from the river to the sea; as well as the upcoming Alternative Palestinian Path Conference (Masar Badil) that will take place at the end of October. At the same time, we invited the passers-by to join the upcoming events that Samidoun has organized in Madrid, such as the screening of “Fedayin, the Struggle of Georges Abdallah“, the event for the tenth anniversary of Samidoun at the EKO Social Center and the big demonstration for Palestine that will take place on 31 October in Madrid.

In addition, many people showed their solidarity by taking pictures with the images of the Palestinian political prisoners. Among them, artists like Toni Mejías, journalists like Miquel Ramos and even political figures like Daniel Jadue, Chilean Communist mayor in the commune of Recoleta.  The stand served to raise awareness among people who were unaware of the issue, but also to increase the information level, interest and involvement of those who knew about the political reality in Palestine. 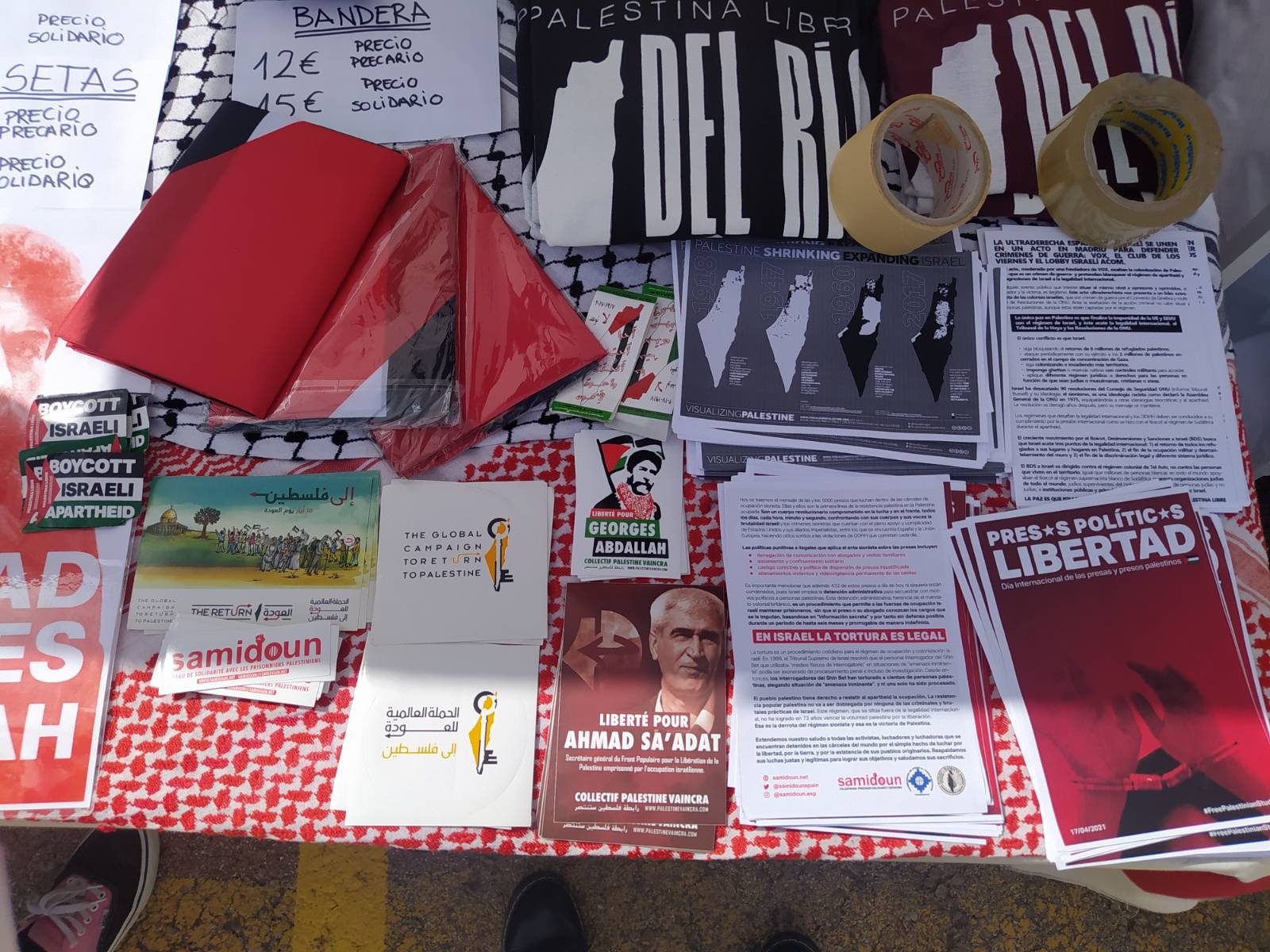 Finally, the solidarity fundraising that the group did through the sale of merchandising was a real success. It was very satisfying to walk around the fairgrounds and see different passersby with T-shirts and bags with the map of Palestine silkscreened and around it in big letters: “Free Palestine from the river to the sea”. 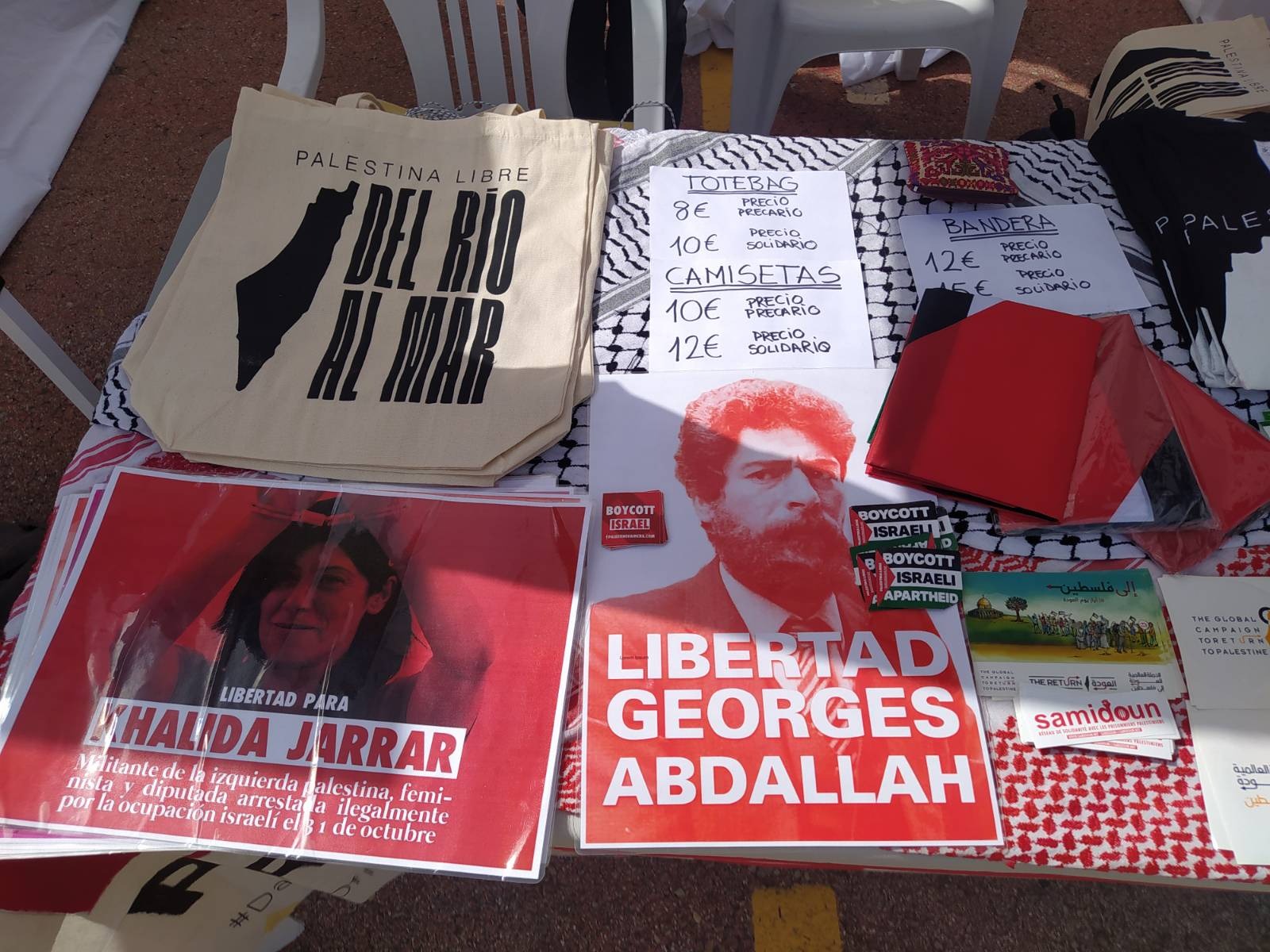 We invite everyone to continue to participate in the next solidarity initiatives, in particular next Tuesday, 26 October at The Neighborhood Theater, where the film “Fedayin, the fight of George Abdallah” will be presented. Georges Abdallah is a Palestinian resistance fighter imprisoned in France since 1984 who, although he has been eligible for release since 1999, is still imprisoned. In addition, for all of you who have run out of T-shirts or bags … this is your moment to get your own!