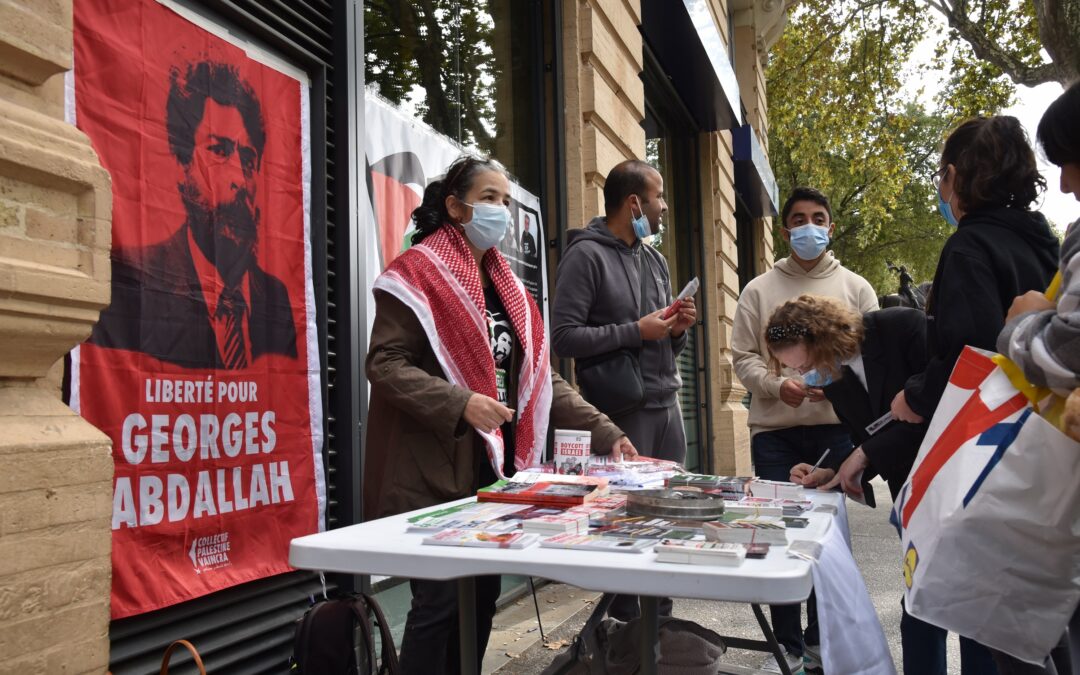 The following report is translated from the original French at Collectif Palestine Vaincra:

Since Friday, 24 September, the Collectif Palestine Vaincra — a member organization of the Samidoun Network — has been actively organizing for the international month of action to free Georges Abdallah. Georges Abdallah is a Lebanese Communist imprisoned in France since 24 October 1984, despite being eligible for release since 1999. Today, broad support continues to grow to demand the immediate release of this man, who has become the longest-held political prisoner in Europe.

In Toulouse, France, 30 organizations, including major trade unions and left-wing parties, have joined their voices to call for the national demonstration on Saturday, 23 October at 2 pm outside the gates of Lannemezan prison, where he is jailed. Read below for the full statement from Toulouse.

At the same time, the Collectif is mobilizing a campaign of information throughout the city to make this appalling situation known to as many people as possible.

On Sunday, 10 October, the Collectif held a Palestine Stand at the Jeanne d’Arc metro station during an outdoor market. The stand was met with a very warm welcome, as many people stopped to discuss Palestine, the case of Georges Abdallah, or sign petitions for his release. Activists displayed a large banner reading “Freedom for Georges Abdallah! Freedom for Palestine!” across the main street, attracting attention from many people.

Earlier on Thursday, 7 October, the Collectif held a stand at the University of Mirail, receiving widespread attention from students, who stopped to learn more about the campaign. They received 77 petition cards signed to demand Georges Abdallah’s immediate release.

They met Leopold Lambert, editor-in-chief of The Funambulist magazine and author of multiple books, including “États d’urgence. Une histoire spatiale du continuum colonial français”. He reaffirmed his support for the campaign to free Georges Abdallah and for anti-colonialist struggles around the world.

On Tuesday, 5 October, the Collectif participated in the large trade union demonstration which brought 5,000 people to the streets of Toulouse. They distributed thousands of flyers and received wide support from participants.

Activists hung posters and signs throughout the city, including in the Arnaud Bernard, Bagatelle, Minimes and Saint-Cyprien neighborhoods, where community members and small businesses showed their support for Georges Abdallah as a symbol of Palestinian resistance against colonialism, racism and apartheid.

On Monday, 4 October, the Collectif distributed hundreds of flyers at the Jean Jaures and Arenes metro stations, discussing with hundreds of people about the current situation in Palestine. Many people learned this May — if they were previously unaware — about the deeply reactionary colonial nature of the Zionist project.

These followed a busy weekend on 2-3 October in Gémenos, where a delegation from Collectif Palestine Vaincra participated in the annual event of the National Association of Communists (ANC), which took place at SCOP-TI cooperative, the former Falib factory taken over by its workers after a mobilization against its closure.

During the event, participants received a message of solidarity from Georges Abdallah. In his comments, he affirmed “the Palestinian cause, as one of the main levers of the Arab revolution, is completely in line with this dynamic. To face all the ‘liquidationist’ proposals, the Palestinian Resistance has and will have to face the ‘Arab-Zionist reactionary bloc’ led by the imperialist powers. Quite naturally the Palestinian popular masses, as well as their fighting vanguards in captivity, can count more than ever on your active solidarity.”

The Collectif organied solidarity photos to free Ahmad Sa’adat, the imprisoned General Secretary of the Popular Front for the Liberation of Palestine.

In appreciation for this effort, Sa’adat sent a message of solidarity: “In my name and in the name of all the prisoner comrades, I salute you for your continued solidarity with the prisoners and with the struggler Georges Abdallah, in particular the comrades of the Collectif Palestine Vaincra and the National Association of Communists.” 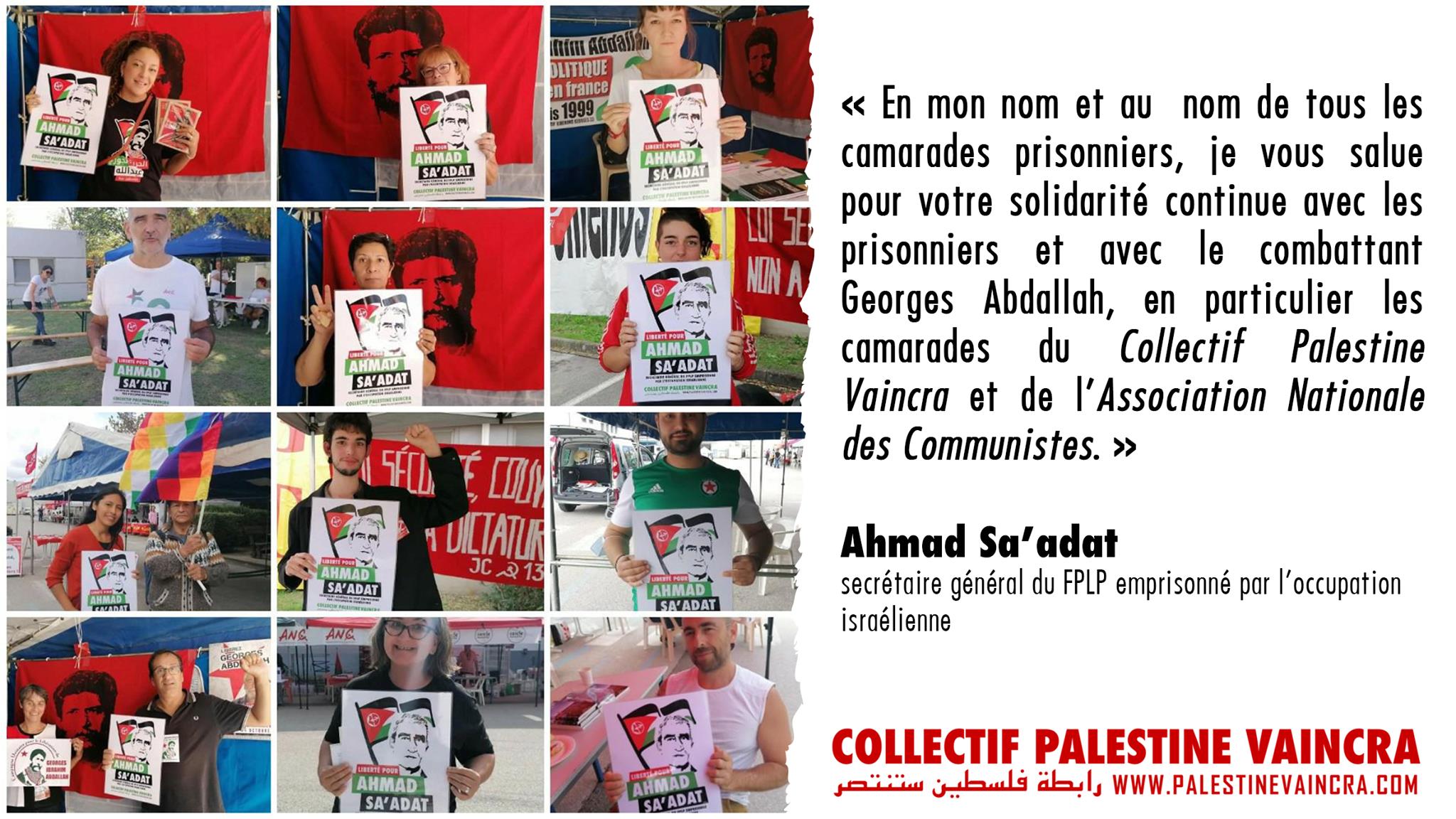 Through a common appeal, 30 organizations in Toulouse and the area are calling for action to liberate Georges Abdallah, especially by joining the demonstration on Saturday, 23 October outside Lannemezan prison, where he is held. There is a free bus from Toulouse: to join, meet at 11:30 am at the Basso Cambo metro. Register for tickets by emailing collectifpalestinevaincra@gmail.com

Freedom for Georges Abdallah!
Solidarity with the Palestinian people!

Georges Abdallah is a Lebanese communist and struggler for the Palestinian cause. From his youth, he was committed to struggle against the Israeli occupation of Lebanon in 1978 and 1982. These military assaults left thousands of civilian victims, as during the massacre of the Palestinian refugee camps of Sabra and Shatila in Beirut in September 1982.

In this context, Georges Abdallah co-founded the Lebanese Revolutionary Armed Fraction (FARL) which claimed several operations on French soil, including the executions in 1982 of Yacov Barsimentov and Charles Ray, agents of the Mossad and the CIA.

Arrested in Lyon on October 24, 1984, Georges Abdallah was sentenced to life imprisonment for complicity in murder. But this conviction is the site of many irregularities, in particular direct pressure from Reagan on Mitterrand, and even his first lawyer, Jean-Paul Mazurier, who later revealed that he had worked for the French intelligence services at the time.

Eligible for release under French law since 1999, Georges Abdallah has made eight requests for release. In 2013, his release was accepted by the sentencing court and made conditional on deportation to Lebanon. However, his deportation was blocked by a political decision by Manuel Valls, Minister of the Interior at the time, who refused to sign the document needed for his release and return home. In March 2020, Georges Abdallah received for the third time a visit from Mr. Rami Adwan, Ambassador of Lebanon to France, this time accompanied by Mrs. Marie-Claude Najm, Minister of Justice of the resigned Lebanese government. During this meeting, they reaffirmed the support of the Lebanese state for the release of Georges Abdallah.

On October 24, 2021, Georges Abdallah will have spent 37 years in French prisons. A broad international campaign demands his immediate release and his return to his country, Lebanon.

In Toulouse, we call for a large participation in the national demonstration Saturday, October 23, 2021 from 2 p.m., which will march from the train station to the prison of Lannemezan (65) where he is being held.