Let them know that their anti-Palestinian behaviour is not acceptable.

Along with the usual trend each December of Canada voting with Israel, the USA and a couple of small countries beholden to the US, opposing most pro-Palestinian resolutions at the United Nations, it has also been an embarrassing time for the Canadian government with its Foreign Affairs minister and its two top diplomats in Ramallah and Tel Aviv all making anti-Palestinian comments.

On December 15, 2021, Robin Wettlaufer, the Head of the Canadian Mission in Ramallah, criticized Electronic Intifada editor Ali Abunimah for tweeting that Canada “arms and funds the apartheid state to murder Palestinians and steal their land.” She responded by writing “we neither arm nor fund Israel.”

After Abunimah and others provided evidence of Canada “arming and funding Israel” the Canadian diplomat then blocked Abunimah on Twitter.

Ms. Wettlaufer should be aware that Canada helps to “arm Israel”. Canadian weapons sales to Israel have received attention in recent months with calls for two way embargos, including her receiving 1K letters just before the election and another almost 3500 over the last month or so. At the NDP convention in April, a resolution was passed calling for Canada to (among other things) end arms sales to Israel; and party leader Jagmeet Singh raised this on multiple occasions during the rise of Israeli violence in May.

Between 2015 and 2020 Canada exported about $15 million a year in weapons directly to Israel.

An equal or greater number of Canadian weapons sales are delivered to Israel through US exports. Under the Canada-US Defence Production Sharing Agreement the two countries’ arms industries are highly integrated so there is little data about weapons exports to the US, some of which would be exported to Israel.

On December 7, 2021 during a response to a question in Parliament, Canada’s foreign affairs minister, Mélanie Joly said:

“…obviously we are a steadfast ally of Israel and friends to the Palestinian people. I raised the question regarding the Palestinian civil society organizations listed by Israel as terrorist organizations with my counterpart, Lapid, when I had the chance to talk to him. Of course, he said to me that he would be giving more clarity on this matter, so I am waiting for him.”

Her reference to the six Palestinian human rights organizations is deeply concerning. Why is she asking and still waiting for information from the Israeli government, when she should be considering the statement made in October by United Nations experts? She has received more than 6,000 letters outlining the situation, and her colleague Nathaniel Erskine-Smith has sponsored a parliamentary petition, E-3679, asking Canada to call upon the Israeli authorities to immediately rescind the designations and end all efforts aimed at delegitimizing and criminalizing Palestinian human rights defenders.

On December 7 in Parliament, she also noted:

“…of course we will always be there to help vulnerable Palestinians. We would rather see them sitting in classrooms in schools that are funded by United Nations organizations than in the streets fighting. That is exactly why we want to make sure we continue to support UNRWA.”

This comment was a clear-cut case of anti-Palestinian racism that needs both a public apology and a commitment to cease and desist from any further dehumanization of the Palestinian people and nation.

Perhaps Lisa Stadelbauer should check her email—over the last few weeks she received copies of almost 6,000 letters sent to the Prime Minister and Minister Joly, expressing concern about administrative detention in Palestinians by Israel in contravention of the Fourth Geneva Convention. Also, Liberal MP Salma Zaid has sponsored two parliamentary petitions, E-3312 and E-3608 signed by almost 7,000 Canadians this year in regard to the treatment of children under Israeli military law including administrative detention. 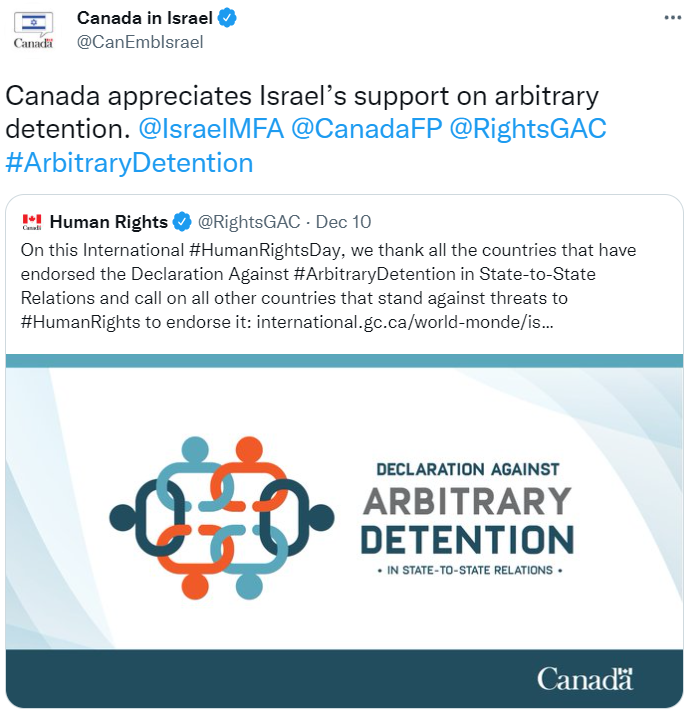 Once again Canada has maintained its “No” vote for Palestine at the UN, with the exception of the one resolution supporting self-determination. In 2019 in a desperate and unsuccessful attempt to show the world Canada was worthy of a seat at the UNSC, Canada after over a dozen years reversed this vote to a “yes”; it has continued to try and save face in 2020 and now in 2021, by maintaining this lone yes vote on Palestinian self-determination. #NoUNSC4Canada

Read more:
It is that time of year again! The UN votes on Palestine! Nothing new– Canada’s vote at the UN since 1947 shows at best conditional support for Palestine