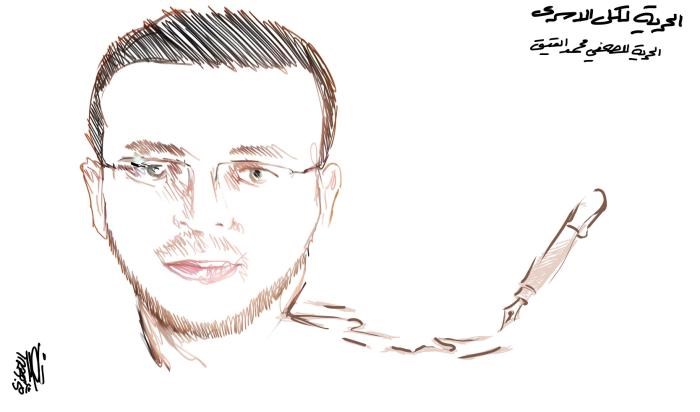 Palestinian journalist Mohammed al-Qeeq, imprisoned without charge or trial under administrative detention, is on his 66th day of hunger strike and in critical condition at HaEmek hospital.

Despite his severe health condition, al-Qeeq has pledged to continue his hunger strike until he wins his freedom. Ashraf Abu Sneinah, Al-Qeeq’s lawyer, said that he has repeatedly fallen unconscious and into a coma and has lost 30 kilograms (66 pounds). 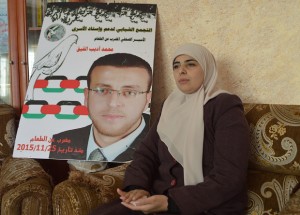 Al-Qeeq, 33, a correspondent for Al-Majd TV, has been ordered to six months administrative detention without charge or trial; despite his critical medical condition, he is shackled on both legs and one arm to his hospital bed, and is guarded by Israeli prison guards who repeatedly bring him food and eat in front of him. Physicians for Human Rights also reported that they were denied access to visit and examine al-Qeeq in the hospital despite scheduling the visit for 27 January and having it approved. “PHRI condemns the HaEmek Hospital’s decision, which reflects the inappropriate conduct that was described by Al-Qeeq until now: the forced treatment and the pressure to end his hunger strike.”

Amnesty International has spoken out about al-Qeeq’s detention. “The only way Mohammad al-Qeq feels he is able to challenge his detention, without charge, is with his body,” said Sunjeev Bery, Middle East-North Africa advocacy director at Amnesty International USA, speaking to Al Jazeera. “Under administrative detention, Palestinian detainees have been imprisoned without knowing why they’re being imprisoned or when they might be released.”

The European Union’s missions in Jerusalem and Ramallah issued a statement “expressing their longstanding concern about the extensive use by Israel of administrative detention without formal charge.” In addition to al-Qeeq’s case, the statement highlighted the administrative detention of Eteraf Rimawi of the Bisan Center for Research and Development, and Mohammed Abu Sakha, the Palestinian Circus School trainer.

“The EU calls for the full respect of international human rights obligations towards all prisoners. Detainees have the right to be informed about the charges underlying any detention, must be granted access to legal assistance, and be subject to a fair trial,” concluded the statement.

Previously, Reporters Without Borders issued a statement on the detained journalist: “RSF is concerned not only about the conditions in which he is being held but also the unclear circumstances of his arrest. RSF is not in a position to verify the reasons for his arrest but notes the lack of any formal charge and the murky procedure used to hold him. It therefore calls on the Israeli authorities to free him and to ensure that their investigation is transparent and impartial.”

Meanwhile, grassroots support for al-Qeeq is growing as his hunger strike escalates. In New York City, Samidoun Palestinian Prisoner Solidarity Network and fellow activists will protest today, Friday 29 January outside the offices of G4S, the global security corporation that provides security equipment and control rooms to Israeli prisons and checkpoints, demanding the immediate release of al-Qeeq. Inminds also organized a protest in London outside BBC headquarters on Friday, demanding his release and denouncing the mainstream media silence on the case.

American Muslims for Palestine called for Al-Qeeq’s immediate release in a statement, urging supporters to contact the US State Department about the case. “While AMP condemns the detention of all Palestinian prisoners, the use of administrative detention is particularly egregious because it denies the person of all due process, something that flies in the face of democratic values,” said AMP Chairman Dr. Hatem Bazian.

In Bil’in, the Popular Committee Against the Wall’s weekly protest focused on supporting al-Qeeq; the protest was attacked by Israeli soldiers firing tear gas.  Protests in Ramallah, al-Khalil, and Nablus also urged the immediate release of Al-Qeeq.