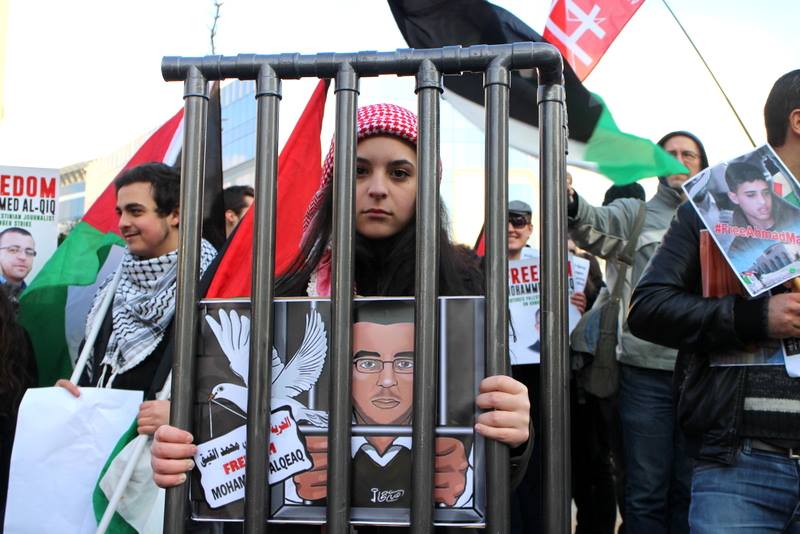 Imprisoned Palestinian journalist Mohammed al-Qeeq is entering his 87th day of hunger strike and facing a severe medical crisis. Mohammed Kana’aneh, former Palestinian prisoner and leader in the Abnaa el-Balad movement in occupied Palestine ’48, reported that al-Qeeq was experiencing severe respiratory problems, severe chest pains and difficulty breathing, and had requested to see his wife and children on the morning of Friday, 19 February.

Kana’aneh is one of several Palestinian leaders from ’48 from across the Palestinian political spectrum who have launched a hunger strike in solidarity with al-Qeeq, including Sheikh Raed Salah and Mohammed Barakeh. Kana’aneh also reported that a large group of Palestinians from ’48, who hold Israeli citizenship, had gathered at HaEmek hospital in Afula and were then attacked and chased out by Israeli special forces, who arrested several of the participants. They have set up a picket line outside the entrance to the hospital, demanding freedom for Mohammed al-Qeeq and his right to be transferred to a Palestinian hospital in freedom, which was denied by the Israeli Supreme Court on Tuesday, 16 February.

Protests continued throughout Palestine demanding freedom for al-Qeeq, and a group of Birzeit University students launched a hunger strike in support of his struggle. Al-Qeeq is a Birzeit graduate; he was a student leader during his time at the university.

On Thursday, Fayha Shalash, al-Qeeq’s wife, posted a brief English language video appealing for international support for the imprisoned journalist, who has been on hunger strike since 25 November, initially in protest of his torture under interrogation and then in protest of his administrative detention without charge or trial.

Shalash called on people around the world to support al-Qeeq’s struggle for freedom:

Samidoun Palestinian Prisoner Solidarity Network calls for EMERGENCY ACTION everywhere in the world to save Mohammed al-Qeeq and secure his freedom, in every city, on every campus, in every community. Events and actions have taken place in London, New York, Montreal, Berlin, Dublin, Brussels, Nicosia, Lebanon, and throughout Palestine. Now is the time for protests, sit-ins, flyering, tabling, and call-in actions to raise the voice and the profile of Mohammed al-Qeeq and create real popular pressure for his immediate release.

2. Protest at an Israeli consulate or embassy (or federal building, G4S office or public square) and demand freedom for Mohammed al-Qeeq. Raise the issue of this case publicly and distribute information – this flyer is available for you to distribute at protests in your community. Find your closest Israeli consulate: http://embassy.goabroad.com/embassies-of/israel.  Please email us at samidoun@samidoun.netto inform us of your action – we will publicize and share news with the prisoners.

3. Boycott, Divest and Sanction. Palestinians have urged an international boycott of Israeli goods and institutions – and corporations that profit from occupation , like G4S, the world’s largest private security company, that sells security equipment to Israeli prisons, checkpoints and police training centers – directly profiting from the occupation that destroys Palestinian lives. At the same time G4S profits from occupation, institutions like the United Nations continue to do business with it. Go to addameer.org/UNdropG4S to take action!