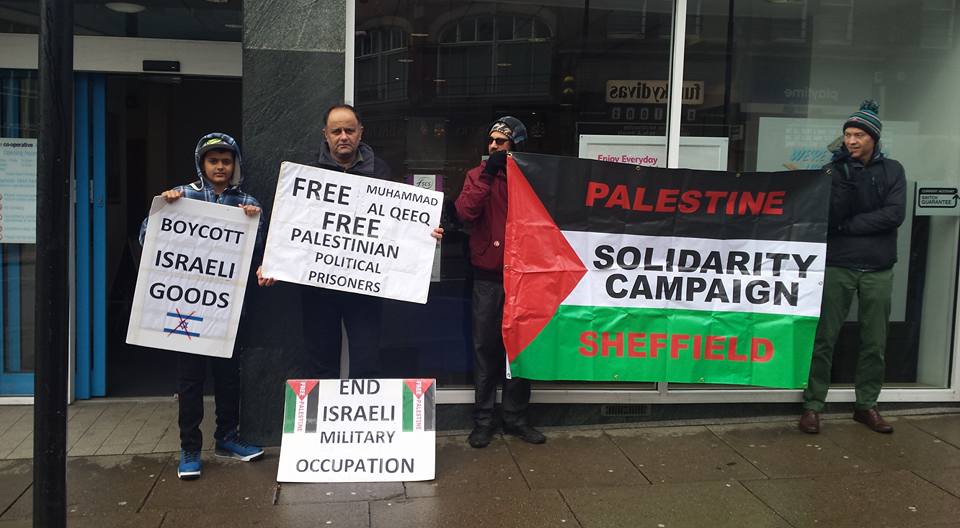 Members of the Palestine Solidarity Campaign – Sheffield protested in Sheffield, UK, in front of the Co-Operative Bank on Saturday, 20 February, demanding freedom for imprisoned Palestinian journalist Mohammed al-Qeeq and an end to the bank’s repeated closures of the accounts of Palestine solidarity organizations. Protesters also called for boycott, divestment and sanctions against Israel.

Al-Qeeq, 33, has been on hunger strike for three months and is in severely critical condition in HaEmek Hospital in Afula, denied both visits with his wife and children and transfer to a Palestinian hospital in Ramallah. He is protesting his imprisonment without charge or trial under Israeli administrative detention, as well as his torture and abuse under interrogation. Protests have been mounting in Palestine and internationally to free him and end the policy of administrative detention as his health situation grows more dire.

Co-Operative Bank has made the news on multiple occasions in recent months for closing the accounts of Palestinian and pro-Palestine organizations in Britain. Over 20 accounts have been closed with little to no explanation, and groups throughout the UK have protested the closures.