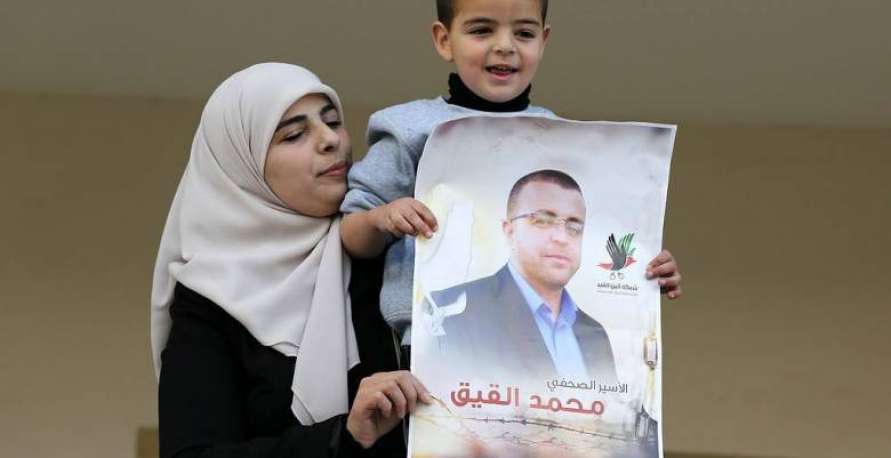 The Israeli military prosecution continues to deny imprisoned Palestinian journalist Mohammed al-Qeeq family visits even as he is in danger of death at any moment. Al-Qeeq, 33, has been on hunger strike for 90 days in protest of his administrative detention without charge or trial by Israeli military order.

Despite the statement of the Israeli Supreme Court on 4 February that al-Qeeq’s detention was “suspended,” with the note that he could receive family visits, he has been consistently denied family visits since that time. His wife, Fayha Shalash and two small children, have been barred from visiting their husband and father. “Israeli human rights group B’Tselem says that al-Qiq is now being detained without any legal authority and that the high court has effectively ‘concocted a new legal myth – a person who is not free, yet is not detained,’ reported the Electronic Intifada.

On Sunday, the Israeli Supreme Court refused to hear a petition to allow Shalash and their children to visit al-Qeeq, instead deferring the matter to a Jerusalem district court.

Also on Sunday night, a deadline set by the Palestinian Prisoners Society for an agreement to release al-Qeeq to al-Makassed hospital in Jerusalem and end his administrative detention passed with no action, and al-Qeeq in a worsening health situation in haEmek hospital in Afula. The PPS announced that if the deadline passed with no action, they would cease to represent al-Qeeq and that the occupation bears sole responsibility for his life and health.

Al-Qeeq’s family announced on Monday morning that Mohammed does not have a lawyer and that he is his own lawyer and is the decision-maker in his case for any agreement.

Israeli police and guard dogs have been posted outside al-Qeeq’s hospital room and once again spread throughout the hospital on Monday morning, 22 February, as al-Qeeq entered his 90th day of hunger strike.

Issa Qaraqe, chair of the Prisoners’ Affairs Commission, emphasized that all efforts will not cease to free al-Qeeq immediately. Palestinian doctors warned of the severe danger to his life at 90 days on hunger strike, including the potential for gallstones, severe pain and anemia, wasting of muscle, bleeding externally and internally, loss of consciousness, heart attack, vitamin deficiency and loss of memory.

Samidoun Palestinian Prisoner Solidarity Network calls for EMERGENCY ACTION everywhere in the world to save Mohammed al-Qeeq and secure his freedom, in every city, on every campus, in every community. Events and actions have taken place in London, New York, Montreal, Berlin, Dublin, Brussels, Nicosia, Lebanon, Belfast, Cologne, Sheffield, Milan and throughout Palestine. Now is the time for protests, sit-ins, flyering, tabling, and call-in actions to raise the voice and the profile of Mohammed al-Qeeq and create real popular pressure for his immediate release.

1. Contact government officials and demand that they break their silence on Al-Qeeq and support for Israeli violations of Palestinian rights. Join today’s action for 90 days of hunger strike!

In the United States, call the Israel Foreign Service Desk 1-202-647-3672 and the White House – 202-456-1111. Demand action on al-Qeeq’s case and an end to aid to Israel. In the UK, call UK Foreign and Commonwealth Office, Philip Hammond, MP, +44 20 7008 1500 or email fcocorrespondence@fco.gov.uk. In Canada, call Foreign Minister Stephane Dion: 613-996-5789. In Belgium, call the Ministry of Foreign Affairs at +32 (0)2 501 81 11 and demand Foreign Minister Didier Reynders act to free al-Qeeq. Throughout the European Union, contact the office of the High Representative for Foreign Affairs, Federica Mogherini, at federica.mogherini@ec.europa.eu. Demand action and serious pressure to free al-Qeeq.

2. Protest at an Israeli consulate or embassy (or federal building, G4S office or public square) and demand freedom for Mohammed al-Qeeq. Raise the issue of this case publicly and distribute information – this flyer is available for you to distribute at protests in your community. Find your closest Israeli consulate: http://embassy.goabroad.com/embassies-of/israel.  Please email us at samidoun@samidoun.netto inform us of your action – we will publicize and share news with the prisoners.

3. Boycott, Divest and Sanction. Palestinians have urged an international boycott of Israeli goods and institutions – and corporations that profit from occupation , like G4S, the world’s largest private security company, that sells security equipment to Israeli prisons, checkpoints and police training centers – directly profiting from the occupation that destroys Palestinian lives. At the same time G4S profits from occupation, institutions like the United Nations continue to do business with it. Go to addameer.org/UNdropG4S to take action!