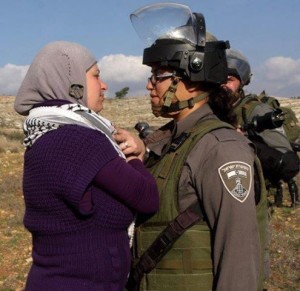 Manal Tamimi, prominent Palestinian activist in the village of Nabi Saleh against settlement expansion on her village’s land, was freed late Thursday, 10 March from Israeli jail after 2 days of detention.

Tamimi, 43, paid a fine of 4,000 NIS (approximately $1,000 USD) and agreed to not publish any Facebook posts or photos of Israeli border guard, Yousef Nasser Eddin, who “complained that she shared a video of him violently attacking Palestinian paramedics and journalists, during clashes near Beit El checkpoint, to the north of Ramallah, back in October of 2015.”

Earlier, the Israeli military court at Ofer had extended her arrest until 11 March. Tamimi was arrested in the early morning hours of Tuesday, 8 March, in a raid on her home by Israeli occupation forces. She and her family in Nabi Saleh village are internationally known for their popular, grassroots struggle and protests against the confiscation of their agricultural land by an illegal Israeli settlement. 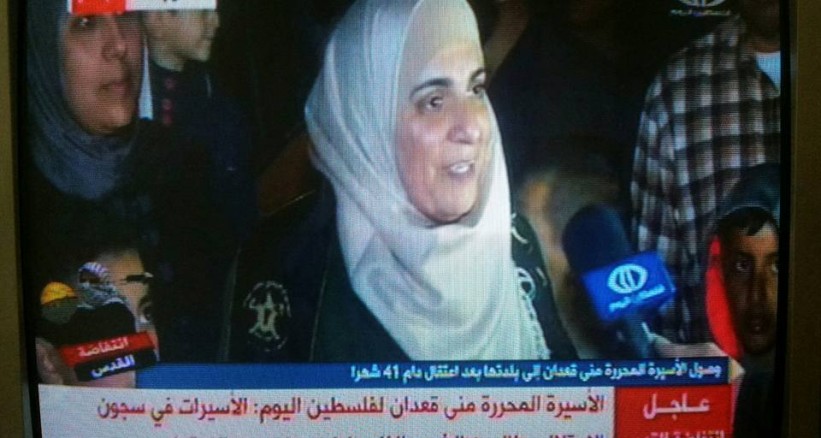 In addition, Mona Qa’adan – who earlier had been reported scheduled for release next month – was also released on Thursday night, 11 March to her home village of Arraba near Jenin, after 41 months of imprisonment. Qa’adan’s sentence had been revised from 70 months to 41 months on Wednesday, 9 March by the Ofer military court. Qa’adan, 44, was prohibited from family visits for over three years in prison on the grounds of “security”.

In interviews immediately after her release, Qa’adan urged attention to imprisoned Palestinian women and especially minor girls, the youngest of whom, Dima al-Wawi is only 12 years old, and injured prisoners.

She noted that wounded prisoners need a public campaign in their defense, as their health and lives are at risk on a constant basis due to the poor conditions inside the prison. In particular, she highlighted the cases of Israa Djaabis, who is suffering from significant burns over a large part of her body and Yasmin Zarou, who suffered a serious abdominal injury. She also urged intensified efforts for the release of Lena Jerbouni, the longest-serving woman prisoner in Israeli jails.

As Qa’adan highlighted the cases of Zarou and the situation of imprisoned Palestinian girls, three of the minor girls, Rama Jaabis, 14; Malak Salman, 16; and Sajida Hassan, 16; revealed in their first visit with a Palestinian lawyer from the Palestinian Prisoners’ Society that they were denied access to their parents during interrogation, during which they were forced to lie on the floor, handcuffed for lengthy periods of time, insulted and degraded, and physically hit by Israeli interrogators. Denial of access to parents during interrogation was also reported by B’Tselem in the case of 12-year-old Dima al-Wawi.