Some of the issues that Ms Zbidat will address in her talk will be:

– The issue of child prisoners and the abuse of children within the system – UNICEF has stated that Israel’s child prisoner “practices are in violation of international law”
– The issue of torture in Israeli prisons.
– Hunger strikes in Israeli prisons.
– Denial of prisoners rights and violations of international law in Israel’s prison system.
– Administrative detention – A form of internment without trial, which Amnesty says is used “to suppress the legitimate and peaceful activities of activists in the Occupied Palestinian Territories”.
– The 99.7% conviction rate for Palestinian security prisoners, tried before Israeli military (non-jury) courts “whose proceedings do not meet international standards for fair trial”, according to Amnesty.
– The detention of Palestinian parliamentarians and civil society leaders. 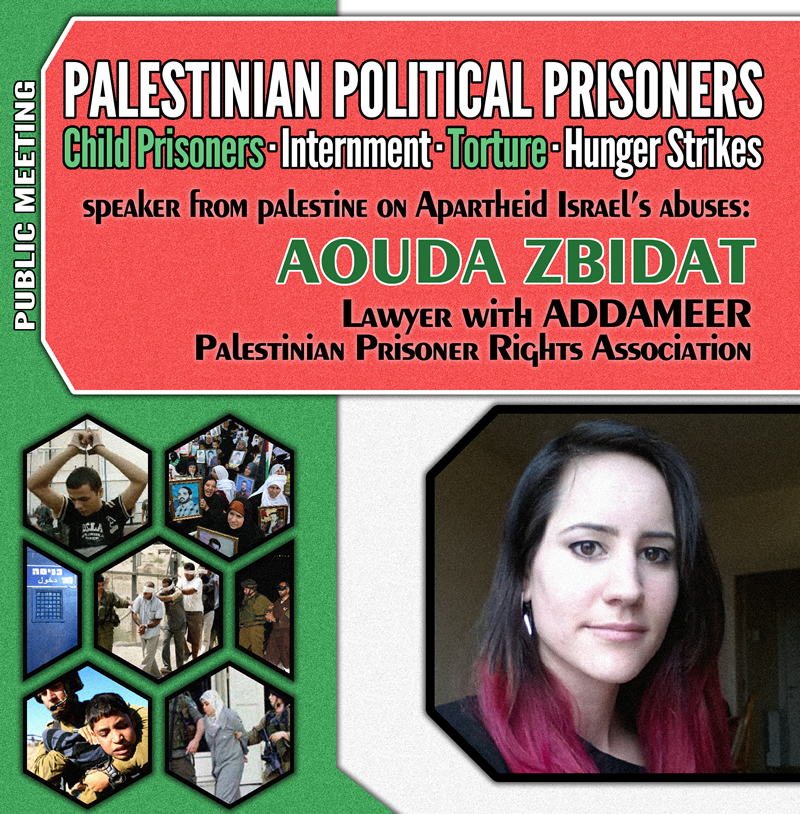 The Israeli prison system – a central part of the architecture of Apartheid.

Since the beginning of the Israeli occupation of Palestinian territories in 1967, it has maintained a mass detention policy targeting, among others, human rights and political activists, children and elected politicians. Some 800,000 Palestinians have been detained by the Israeli military, approximately 40% of the total male population in the occupied Palestinian territories.  Israel’s torture, ill treatment and other violations of human rights and international law in regards to political prisoners is widespread and systematic. As of February 2016, the number of Palestinian political detainees held in Israeli prisons is 7000, 406 of which are children and 670 are administrative detainees, indefinitely interned without charge or trial.

The issue of prisoners, particularly child prisoners, is one that is often overlooked in discussions around the Palestine-Israel issue, usually only mentioned when Israel releases prisoners as a so-called ‘goodwill gesture’. Yet the prisoners issue goes to the very heart of Israeli policy in Palestine – the decapitation of political movements, the criminalisation and ‘securitisation’ of young people who resist occupation, not to mention the psychological and traumatic effects detention and abuse has on young people who go through the prison system. Even NGOs who work with prisoners are targets of Israeli policy, with offices being raided and advocates themselves detained.

Through providing legal aid, documentation of the violations and local and international advocacy and lobbying Addameer works to end the policy of mass arbitrary detention and the gross violations of Palestinians’ rights and aspires to build a free and democratic Palestinian society.

Aouda Zbidat is a Palestinian lawyer at Addameer (Arabic for conscience), a human rights organization based in occupied Palestine who campaign for the rights of Palestinian Political Prisoners. Aouda has, for the past three years, worked in Israel’s military courts representing Palestinian detainees and has closely worked on Addameer’s various campaigns to end policies of arbitrary administrative detention, and campaigns in support of hunger striking detainees.

Addameer is a Palestinian non-governmental, civil institution that works to support Palestinian political prisoners held in Israeli and Palestinian prisons. Established in 1992 by a group of activists interested in human rights, the center offers free legal aid to political prisoners, advocates their rights at the national and international level, and works to end torture and other violations of prisoners’ rights through monitoring, legal procedures and solidarity campaigns. Addameer believes in the importance of building a free and democratic Palestinian society based on justice, equality, rule of law and respect for human rights within the larger framework of the right to self-determination. Addameer’s work is based on a belief in the universality of human rights as enshrined in international law.

Addameer has been actively involved in the development of Palestinian civil society since its establishment. In particular, in its role as an executive member of the Palestinian NGO Network and the Palestinian Council of Human Rights Organizations, Addameer plays an important role in structuring the response of civil society to human rights violations, as well as directing strategies for increased community awareness. This has also placed the association in a unique position because of its strong commitment and relationship to the local community. Community involvement remains the backbone of the organization, in the form of volunteerism and support for all activities of the association and its campaigns. Addameer strives to be more than a service-oriented association, but rather a resource for the local and international community to address human rights violations. In that regard, Addameer also works closely with international human rights organizations such as Amnesty International, Human Rights Watch, OMCT and FIDH to provide regular information on the situation of Palestinian political detainees.