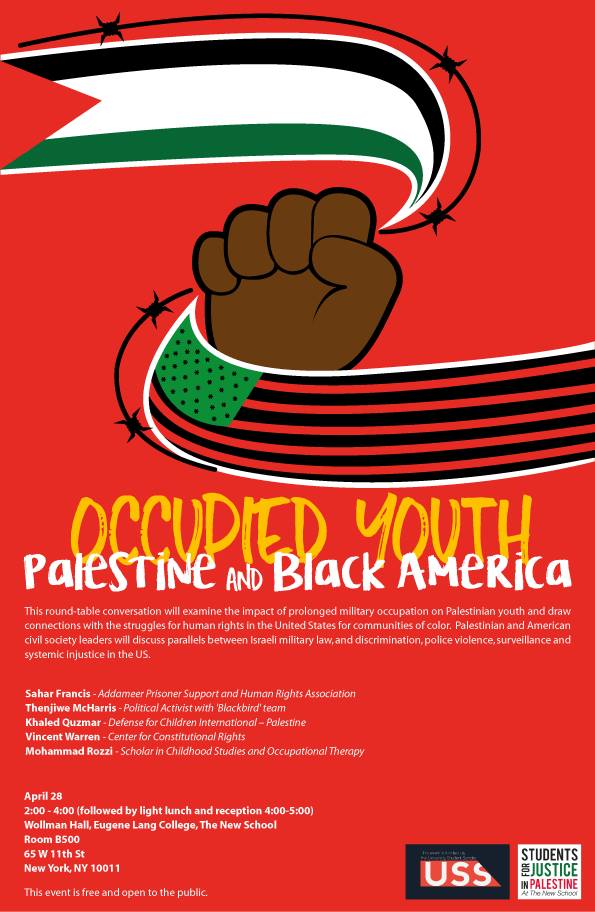 This round-table conversation will examine the impact of prolonged military occupation on Palestinian youth and draw connections with the struggles for human rights in the United States for communities of color. Palestinian and American civil society leaders will discuss parallels between Israeli military law, and discrimination, police violence, surveillance and systemic injustice in the US.

Sahar Francis is a Palestinian lawyer and general director of Addameer Prisoner Support and Human Rights Association. She became director in 2005, and has been a human rights legal advocate since 1994.

Thenijwe McHarris is currently working with a team called Blackbird, which is focused on movement building in the current historical moment that centers anti-black racism, state violence and black resistance as part of the ongoing struggle to transform the country.

Khaled Quzmar is a Palestinian lawyer and general director of Defence for Children International – Palestine. Quzmar joined DCIP in 1995 as a lawyer representing Palestinian children in Israeli military courts.

Vincent Warren is an American lawyer and executive director of the Cneter for Constitutional Rights in New York.

Mohammed Rozzi is a Palestinian scholar from the Gaza Strip who is currently completing his Ph.D. studies in Switzerland.

Organized by Students for Justice in Palestine at the New School