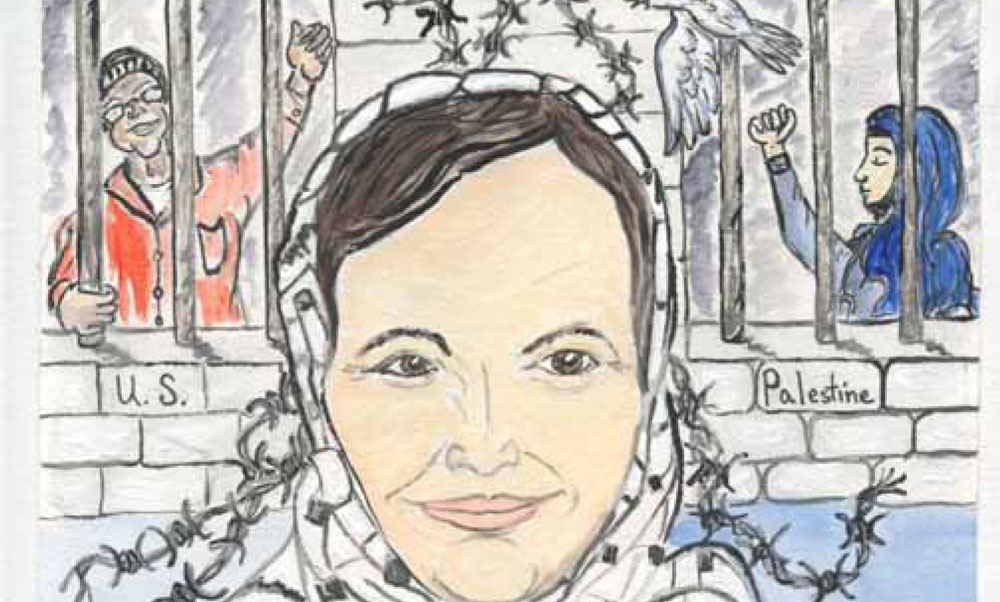 The U.S. Prisoner, Labor and Academic Solidarity Delegation to Palestine gathered letters and statements from political prisoners in U.S. jails – including Herman Bell, Oso Blanco, the MOVE 9, Jalil Muntaqim and Mumia Abu-Jamal – to share with the Palestinian movement in Palestine.

These testimonies, translated into Arabic by the Bir Zeit University Institute for Women’s Studies, were compiled into an Arabic/English booklet (available for download), which features a portrait of Rasmea Odeh by political prisoner Marius Mason.

Herman Bell’s statement, “For Palestine,” is featured on the Free Herman Bell website. We republish the statement below with deep appreciation for his solidarity from behind bars and through the walls, and join in the call and campaign to immediately free Herman Bell and all U.S. political prisoners:

To the Palestinian people – Greetings and solidarity!

I have followed, supported, and I continue to follow and support your heroic struggle to rid Israeli occupation of your homeland. Almost daily we hear of israeli tank shells and missiles firing into your homes, your hospitals, and school buildings; we see pictures of broken bodies being dug from the rubble. Whole neighborhoods and vital resources: food, water, electricity are decimated. So much death, bloodshed, and destruction when seizing and occupying other people’s land, an old narrative that Indigenous people the world over know so well.

The international community does nothing throughout this occupation of your land; it sits on its hands, laments the destruction and loss of life and does nothing. I feel the beat of your seething heart. And during periodic lulls throughout this decades-long occupation, when even the occupiers seem sated from their bloodlust, you rise up from your magnificently dug tunnels firing off salvos of your own bootleg missiles into the towns and hamlets of the occupiers. Your creative resistance to this occupation is so reminiscent of the Vietnamese people’s spirited resistance to u.s. occupation during their war of national liberation. When having shot-down a heavy u.s. B-52 bomber, they built iron bars around it with a sign saying: “We caged this beast!”

Freedom loving people the world over support your struggle, support your courage and fortitude in resisting this occupation. For we know that while heads of governments in the international community posture, gesture, and pronounce empathetic words, they speak but one language, the language of the occupier, which is why they will neither condemn nor prevent this ongoing carnage and continued israeli occupation of your land. For that, the Palestinian people have to look to themselves.

But you don’t fight alone.

Afrikan-American people here in North America support you and know occupation well. Here the local and national police force are our occupiers. Throughout some three-hundred years of tyrannizing the soul and body of the Black community, america’s pervasive racism and cultural domination has overworked itself, yet our spirit remains unbowed. And we’ve been enslaved longer than we’ve been free. We suffer mass-incarceration, racial profiling and unrelenting, police violence. We endure; we bide our time. For we know nothing lasts forever. Thus we affirm that no daylight exist between the Afrikan-American and Palestinian struggle in resisting the racist, oppressive violence that occupies, that kills, that imprisons us here and you over there. Our struggle is one.

Accordingly, as we go forward, as you speak comparatively of israeli social policies that resemble the racist South African apartheid regime’s social policies, I would urge that you speak also of the similarity between the Afrikan-America and Palestinian struggle. The comparison is effective; it resonates. Both our hardship and casualties originate from the same source; our communities are stressed; our men and women have been captured, tortured, imprisoned, or killed. Our families suffer; our children experience uncertain tomorrows. You don’t fight alone; our struggle is one, and we build to win.

Download Booklet: Arabic and English Letters of US Political Prisoners