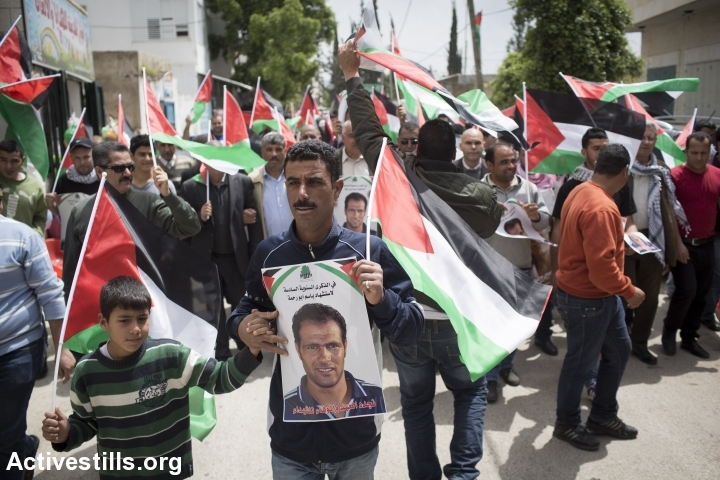 567 Palestinians were arrested by Israeli occupation forces during April 2016, bringing the number of those arrested since the beginning of the popular uprising in October 2015 to 5334 Palestinians. The highest number of arrests were in Jerusalem, where 213 were arrested including 60 minors; al-Khalil, where 120 were arrested; followed by 43 in Ramallah, 40 in Nablus, 38 in Bethlehem, 35 in Qalqilya, 23 in Jenin, 12 in Tulkarem, 9 in Tubas, five in Salfit and four in Jericho; in the Gaza Strip, 25 were arrested, including 20 fishers who were subjected to firing and attacks in the sea, two who passed Beit Hanoun (Erez) crossing, and three near the “border” of Gaza.

The Israel Prison Service used special units in raid and search operations launched by the prison administration on a regular basis as a means of collective punishment by the Israel Prison Service from arrest until release. The prison administration fabricates pretexts to launch these attacks, in which prisoners are subjected to cruel and inhumane treatment.

These special units suddenly invade or launch inspections, so as to prevent prisoners from preparing themselves or taking precautionary measures, usually in the early morning hours and sometimes in the hours after midnight; sometimes these fall in the middle of the day, including during prayer times or during iftar in Ramadan. The aim of these raids is to harass and abuse detainees; these special units use provocative actions against prisoners, including dragging prisoners from the rooms, yelling in their faces, verbally abusing them, and confiscating personal documents and family photos, creating provocations which are then used to justify attacks on prisoners.

In the month of April, the incident of the storming of section 14 in Nafha prison went beyond a typical invasion/inspection process with beating of prisoners. This incident occurred after guards refused to allow Akram Siyam and Muharreb Da’is to use the bathroom, which led to an altercation between the guards and the prisoners, during which armed units broke into the section, beat prisoners, sprayed pepper spray and tear gas, removed prisoners from the section, then returned Da’is to the section and invaded again to take him back. Prisoners refused to hand him back and a large force returned with dogs, forced all the prisoners from the room, and attacked them with batons. This caused numerous injuries, including to the ill prisoner Yousry al-Masri, who has cancer and was beaten with a baton on his neck and in his liver area.

The prison administration closed all sections of the prison, and imposed sanctions on section 14, including removal of electrical appliances, denial of family visits, and isolation from other prisoners.

17 prisoners are isolated under the pretext of “threat to state security,” without evidence to indicate this threat. They are held in solitary confinement cells for 23 hours a day except for one hour of recreation when they are with guards only. Solitary confinement is harmful to mental and physical health. The prison service issues isolation orders which can be extended every six months on the decision of the military court, based on a secret file not revealed to prisoners or their lawyers.

Among the isolated prisoners are Noureddine Amer, 34, from Qalqilya, isolated since 21 September 2013, imprisoned since 2 February 2002, and serving a 55 year sentence. He is held in a 3.5 m x 1.5 m room, in Eshel prison, which contines a toilet and a metal door with a slot for introducing food, and has a closed window. He is allowed out for recreation alone for one hour per day.

He has been held in isolation in multiple prisons: Ramon, Ashkelon, Megiddo, Shatta, Gilboa and Ayalon. He is transfered by “Bosta”; transfers take many hours. Prisoners transfered by “Bosta” are prevented from looking through the window and their hands and feet are shackled. During these transfers, Amer is accompanied by special forces who often engage in provocations and subsequent attacks. In July 2015, he was beaten by five military guards; his nose was bleeding and he was in pain but was not given treatment. His belongings were scattered, and they told him to gather them again while he was handcuffed.

He suffers from several diseases worsened by the environment of isolation, including shortness of breath, high cholesterol, joint problems, severe headaches, and stomach ulcers. He sustained a fracture in his hand eight years ago in Gilboa prison and did not receive treatment, and continues to suffer today from the injury to his hand.

He has been denied all forms of communication with his family since his isolation. His mother is elderly, suffers from cancer and had a stroke; he has learned this news only through visits from his lawyers. Three of his brothers are also imprisoned; Nidal Amer is sentenced to life imprisonment, Abdul Salam Amer to 20 years, and Aysar Amer is held in administrative detention since February 2016.

Systematic policy of torture and abuse during the detention of children

Children are exposed to systematic torture, humiliation and cruel treatment from the first moment of arrest, characterized by methods of detention, whether through late-night home invasions, detention by special units or by undercover soldiers who seek to appear “like Arabs” on the street. In addition to degrading treatment of children during their arrest and transfer, they are shackled hand and foot and blindfolded while taken to detention or interrogation centers where they are directly exposed to ill-treatment. This comes either through beatings using hands and feet, cursing and yelling at them in order to provoke fear, or through solitary confinement and harsh conditions to psychologically pressure them,

Among the cases of minor prisoners is that of Mohammed Amarna, 17, from Ya’bad near Jenin, who was arrested on 2 March 2016 from his home. During a legal visit inside the prison, his lawyer confirmed that Amarna had been beaten, insulted and mistreated during transfer to a detention center where he was blindfolded and his hands cuffed behind his back. He was held for hours ouside, slapped by a soldier in the face repeatedly as well as by an interrogator.

157 Palestinians detained in connection with activities on social media

The Israeli government formed in recent months the so-called “Cyber Unit” to step up its prosecutions of Palestinians on social media, especially Facebook.

From October 2015 to April 2016, there have been 157 cases of arrests based on expression and opinion posted on Facebook. A number of people have been indicted for “incitement,” while others have been ordered to administrative detention.

The majority of arrests have taken place in Jerusalem as part of the targeting of Palestinians in Jerusalem. Many of the statements express sympathy or solidarity with Palestinian martyrs killed by Israeli occupation forces, or include publishing the photos of martyrs or prisoners.

The suppression of freedom of speech, opinion and expression on social media is not limited to cases of arrest, but has also included terminating the employment of accused Palestinians from institutions in Jerusalem or 1948 occupied Palestine, or forcibly expelling them from their city of residence, especially Jerusalem.

Battle of the empty stomachs

During the month of April, Palestinian prisoners engaged in a number of individual and collective hunger strikes for multiple reason. Sami Janazrah, 43, from al-Khalil, has continued his hunger strike since 3 March, and Fuad Assi, 30, and Adib Mafarjah, 29, both from Ramallah, continue their hunger strikes since 3 April. All are striking against their administrative detention without charge or trial.

In addition, thousands of prisoners collectively engaged in a protest, returning food in rejection of the attacks on prisoners in Nafha prison.