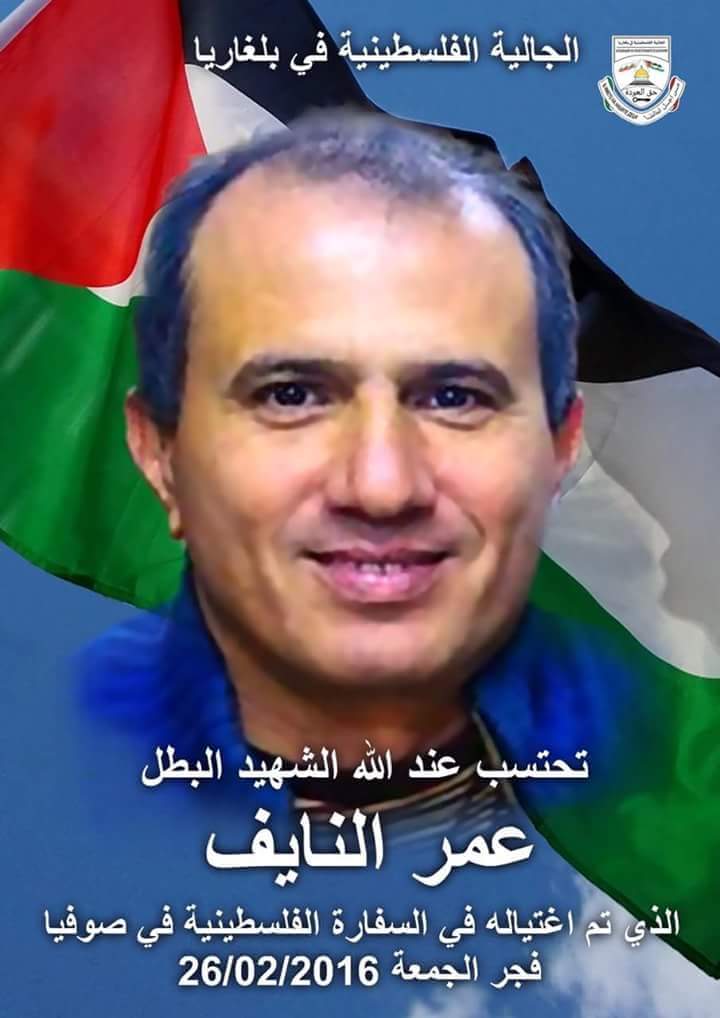 The family, friends and comrades of Omar Nayef Zayed will bury the former Palestinian prisoner – found dead in the Palestinian embassy in Sofia on 26 February 2016 – today, 10 June, at Sofia’s Muslim cemetery.

Nayef Zayed, 52, was a former Palestinian prisoner, who as a member of the Popular Front for the Liberation of Palestine was imprisoned in 1986 and convicted, with two of his comrades, his brother Hamza and re-imprisoned Palestinian prisoner Samer Mahroum, of involvement of an attack on an extremist Israeli settler in Jerusalem. In 1990, he engaged in a 40-day hunger strike and after being moved to a hospital in the West Bank, escaped from the hospital and fled Palestine. He traveled in the Arab world for four years before moving to Bulgaria.

In Bulgaria, he married his wife Rania; they had three children. All are Bulgarian citizens. Omar, a permanent resident of Bulgaria, ran a grocery story in Sofia and was an active member in the Palestinian community in the Bulgarian capital. In December 2015, the Israeli embassy in Bulgaria officially submitted a request for his extradition, saying that his case would remain active until 2020. Nayef Zayed took refuge in the Palestinian embassy in Sofia.

Samidoun organized an international campaign in support of Nayef Zayed that included working with international lawyers to secure him representation, meeting with European parliamentarians to call for the rejection of extradition of former Palestinian political prisoners to the Israeli state, organizing protests and demonstrations, and building grassroots support for freedom and justice for Nayef Zayed.

At the same time, Nayef Zayed was subjected to intense pressure by PA Ambassador Ahmad al-Madhbouh to leave the embassy, while being threatened with arrest and extradition to Israel – and separation from his family for potentially the rest of his life – by the Bulgarian and Israeli states. On 26 February, after 71 days in the embassy – and as he was planning with his Bulgarian and European lawyers to launch a new legal and political challenge for his freedom – he was found dead outside the embassy, bloody, after a fall of several stories.

The official autopsy report has not been released, and Nayef Zayed’s family, comrades, and supporters of Palestine and Palestinian prisoners around the world have continued to protest and demand accountability and justice in the death of Omar Nayef Zayed, with those responsible held accountable.

Samidoun Palestinian Prisoner Solidarity Network mourns Omar Nayef Zayed, a struggler for the freedom of Palestine and his people until the moment of his death. We will continue in the struggle for justice and accountability for Omar Nayef Zayed and all Palestinians whose lives are taken in the struggle for the freedom of Palestine.