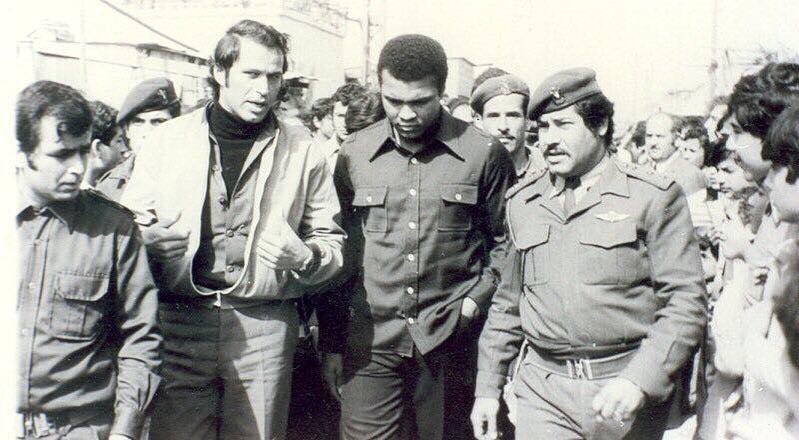 On the occasion of the passing of legendary athlete and struggler for justice, Muhammad Ali, Samidoun Palestinian Prisoner Solidarity Network joins millions around the world in remembering Ali’s historic legacy of commitment to the liberation of oppressed peoples and his willingness to sacrifice in order to adhere to those principles.

In 1985, Ali traveled to Israel in an attempt to secure the release of Lebanese and Palestinian prisoners imprisoned in occupied Southern Lebanon. This followed on his visits to Palestinian refugee camps in 1974, when he declared in Beirut that “the United States is the stronghold of Zionism and imperialism.” While visiting Palestinian refugee camps in South Lebanon, he declared “In my name and the name of all Muslims in America, I declare support for the Palestinian struggle to liberate their homeland and oust the Zionist invaders.”

Ali championed the Black liberation struggle on multiple fronts; within the United States, and as a force against US imperialism worldwide. He wrote poetry in tribute to the Black leaders of the Attica prison uprising. At the height of his career, Muhammad Ali refused to fight in the Vietnam War in 1967, was sentenced to five years in prison and stripped of his title. When asked about his refusal while participating in a Louisville housing justice struggle, Ali said:

“Why should they ask me to put on a uniform and go 10,000 miles from home and drop bombs and bullets on Brown people in Vietnam while so-called Negro people in Louisville are treated like dogs and denied simple human rights? No I’m not going 10,000 miles from home to help murder and burn another poor nation simply to continue the domination of white slave masters of the darker people the world over. This is the day when such evils must come to an end.

I have been warned that to take such a stand would cost me millions of dollars. But I have said it once and I will say it again. The real enemy of my people is here. I will not disgrace my religion, my people or myself by becoming a tool to enslave those who are fighting for their own justice, freedom and equality.

If I thought the war was going to bring freedom and equality to 22 million of my people they wouldn’t have to draft me, I’d join tomorrow. I have nothing to lose by standing up for my beliefs. So I’ll go to jail, so what? We’ve been in jail for 400 years.”

Dave Zirin writes, “Ali’s refusal to fight in Vietnam was front-page news all over the world. In Guyana there was a picket of support in front of the US embassy. In Karachi, young Pakistanis fasted. And there was a mass demonstration in Cairo.”  While Ali’s later depoliticization and cooperation with the US government speak to a more complex legacy, the national and international resonance of his resistance to imperialism in the 1960s and 1970s at the height of his athletic greatness echoed around the world.

Ali’s history of struggle illustrates the lengthy and deep history of joint struggle and mutual solidarity among oppressed peoples and national liberation movements, and that Palestinian refugee camps in Lebanon – and the Black Liberation Movement – were centers and incubators not only for the Palestinian revolution and Black struggle, but revolutionary movements the world over. We recall Ali’s role in representing a deep and collective legacy of resistance to imperialism, to anti-Black racism, and to Zionism, and of the struggle to free prisoners – and peoples – from the jails these systems of oppression create.