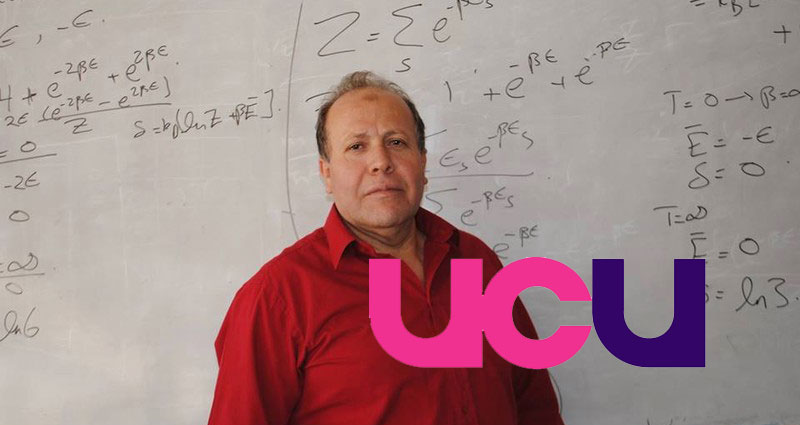 The UK’s University and College Union (UCU), representing over 100,000 members as the largest trade union and professional association for academics, lecturers, trainers, researchers and academic-related staff working in further and higher education throughout the UK, affirmed its support for the rights of Palestinian academics under attack in an emergency motion passed at its Congress on 1-3 June.

The motion, which was passed with no opposition, notes the arrest, detention, and now charges against renowned Palestinian astrophysicist Imad Barghouthi, as well as the repression and threats against BDS movement co-founder Omar Barghouti; it instructs the union’s General Secretary to raise the matter with British officials and the Israeli embassy. The motion also commits UCU to distributing Samidoun’s call to action for Imad Barghouthi and fellow Palestinian prisoners, urging members to write to British and Israeli officials to call for his release.

Congress notes with dismay that:

Congress condemns these fundamental breaches of human rights, instructs the General Secretary to raise these matters urgently with the FCO and the Israeli Embassy, and agrees to circulate the call by Samidoun Palestinian Prisoner Solidarity Network* to all members, asking them to write to MPs and the Israeli embassy calling for Prof.Al-Barghouthi to be released immediately.

Congress further instructs the General Secretary to call on the Israeli authorities to end the use of administrative detention.

Barghouthi, 54, a professor at Al-Quds University and former employee of NASA in the United States, was arrested on 24 April at an Israeli military checkpoint as he traveled from Nabi Saleh to his home in Beit Rima. He was shortly ordered to three months’ administrative detention. Following an outcry by internationally prominent scientists, mathematicians and academics, his administrative detention without charge or trial was reduced to two months, and then his release ordered after one month. However, the Israeli military prosecution refused to release him and has now charged him in the military court system – where Palestinians are convicted at a rate greater than 99 percent – for posting on Facebook, labeling his posts “incitement.”

“My father isn’t the only scientist who has been persecuted by the Israeli occupation. There is a war on Palestinian education. I hope to see Israel held accountable for its cruel actions on an international level,” said Imad’s daughter, Duha Barghouthi, a new high school graduate whose graduation day came with her father imprisoned.

International organizations, scientists and academics have continued to call for Barghouthi’s immediate release, alongside other Palestinian prisoners.

Palestinian BDS co-founder Omar Barghouti has faced threats and attacks on his residency by high-ranking Israeli officials, both in public speeches and in practice, alongside attempts to criminalize BDS internationally being forwarded by the Israeli government.

The UCU has a long history of international solidarity and important motions in support of the rights of the Palestinian people and the BDS movement. It has supported the boycott, divestment and sanctions movement and the academic and cultural boycott of Israel. It has also expressed solidarity with imprisoned Palestinians, including writer and academic Ahmad Qatamesh. The UCU has come under attack by right-wing pro-occupation forces for its consistent positions, and was victorious in 2013 in a legal challenge brought by a pro-Zionist union member which was soundly rejected by a British employment tribunal.