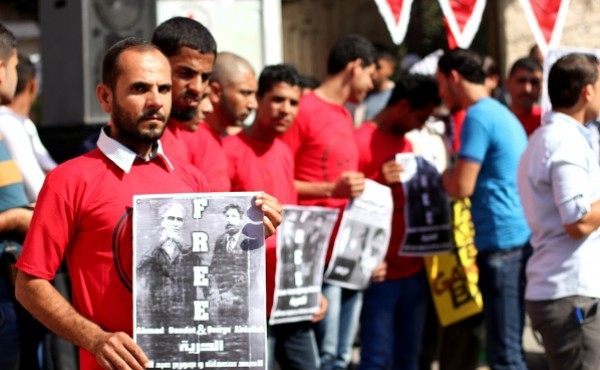 The following call to action from the Progressive Student Labor Front in Palestine was issued on 14 July, the 30th day of hunger strike for Palestinian prisoner Bilal Kayed, imprisoned under administrative detention – without charge or trial – after the expiration of his 14.5 year sentence in Israeli jails. Kayed is currently held in isolation in Ashkelon prison. Events across Palestine and around the world are being organized for his release.  Kayed is one of 750 Palestinians held in administrative detention and over 7,000 total Palestinian prisoners in Israeli jails.

The Progressive Student Labor Front responds to the call of the heroic prisoners, announcing the World Student Day of Solidarity with the struggler Bilal Kayed and all Palestinianprisoners

The Progressive Student Action Front confirmed it is responding to the call of the Popular Front for the Liberation of Palestine leadership, urging the student movement to take urgent action and organize events in support of the struggling prisoners, in particular the hunger striking prisoner Bilal Kayed engaged in a battle of freedom with the occupation, fighting the jailer with steadfastness and his empty stomach.

The PSLF said that it will work with the Palestinian and international student movement to organize a series of events supporting the prisoners, including a wide range of activities to be organized by the PSLF in universities and in front of the International Committee of the Red Cross buildings, and in public streets and squares.

The PSLF also announces that it will launch an initiative to organize a World Student Day of Solidarity with Bilal Kayed and Palestinian prisoners, including a one-day hunger strike, with the participation of progressive student organizations and student supporters of justice in Palestine around the world.

The PSLF emphasized their support of the heroic prisoners, in the forefront the imprisoned General Secretary of the PFLP, Ahmad Sa’adat, and the imprisoned Palestinian students inside the Zionist jails, confronting the jailer with steadfastness.