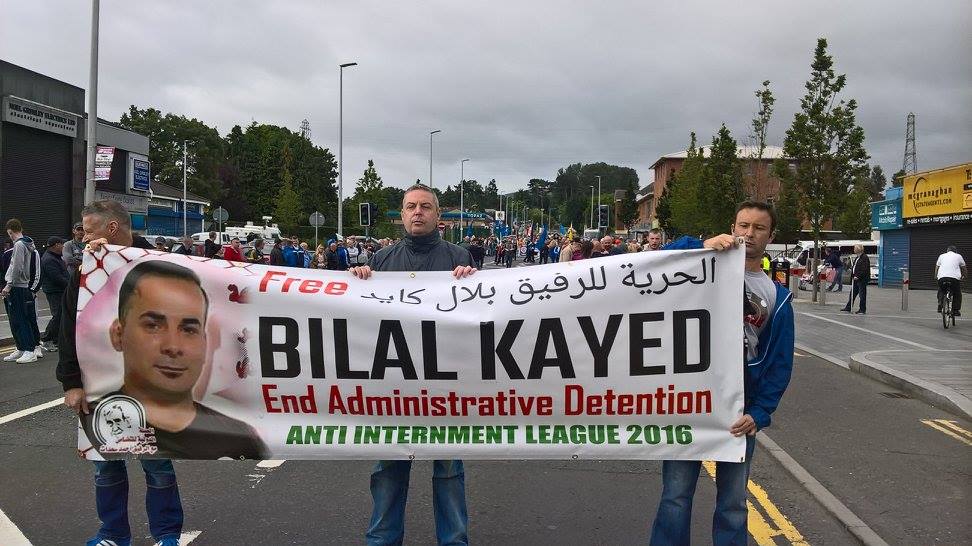 Every year, the Anti-Internment March in Ireland highlights the cases of imprisoned Irish republicans in British jails who remain imprisoned to this day. Large crowds of people participated in this year’s rally and march through Belfast on 7 August that highlighted the struggle of anti-colonial Palestinian prisoners directly alongside the struggle of Irish prisoners for freedom and liberation. Particular attention was paid to the case of Bilal Kayed, now on his 55th day of hunger strike. The Irish history of hunger strikes in prison is long and painful; in 1981, ten Irish prisoners died while hunger striking for recognition of their political status. 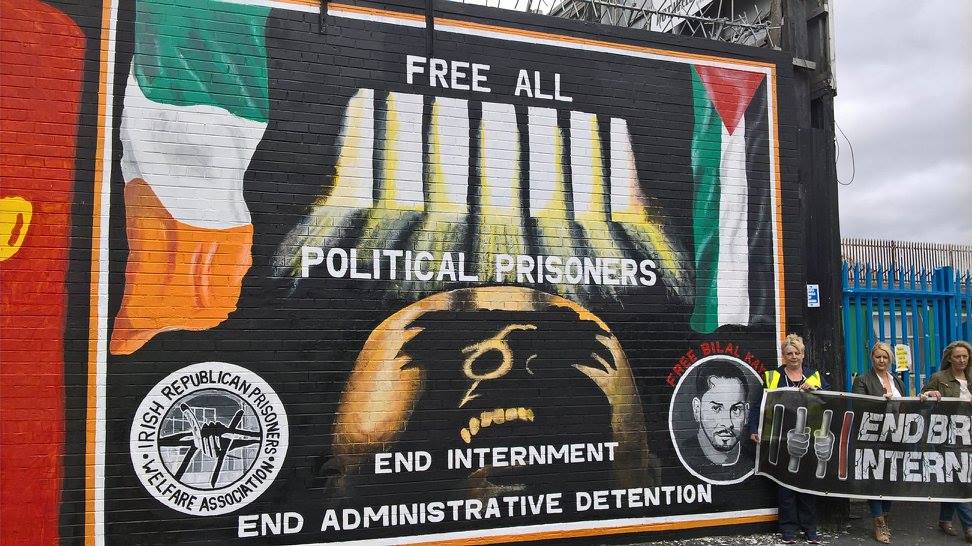 The Irish Republican Prisoners Welfare Association launched a new mural on Belfast’s International Road at the march, with an Irish flag and a Palestinian flag and demanding freedom for Bilal Kayed. The march, which mobilized large crowds to highlight the ongoing Irish anti-colonial struggle and the fight against repression and imprisonment, was jointly led by two banners, one reading “End British Internment” and the other reading “Free Bilal Kayed – End Administrative Detention.” 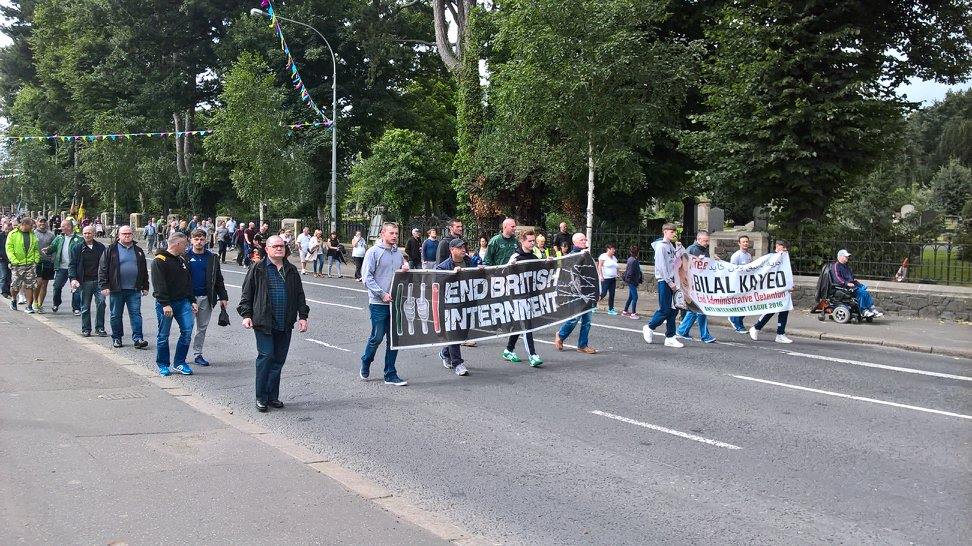 In Palestine, activists in the solidarity tent to support Bilal Kayed raised the Irish flag to show solidarity with the Irish struggle and the interned prisoners. Kayed’s hunger strike has been joined by over 80 Palestinian prisoners collectively engaged in a long-term open hunger strike to demand his freedom, including Ahmad Sa’adat, General Secretary of the Popular Front for the Liberation of Palestine. Kayed was ordered to six months of indefinitely-renewable administrative detention without charge or trial after the expiration of his 14.5-year sentence in Israeli prison on 13 June. His strike is part of a battle against this dangerous precedent of indefinite imprisonment of Palestinian prisoners without charge or trial following the completion of their sentences and is supported by the Palestinian prisoners’ movement as a whole. 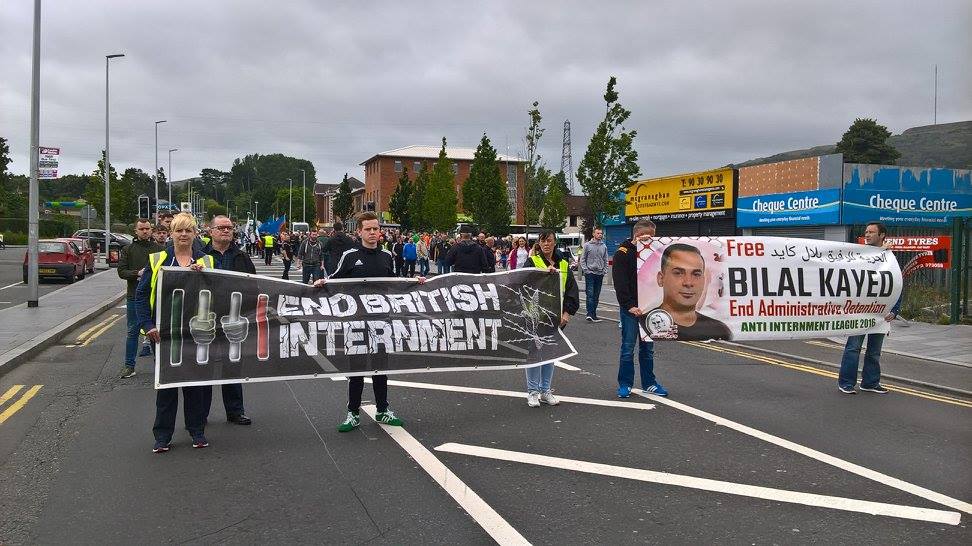 The Irish republican movement’s solidarity with Bilal Kayed is building on a long history of mutual solidarity between liberation struggles and prisoners’ movement. Frequent protests and actions for Kayed and previous hunger strikers take place in Belfast, Dublin, Derry, Wicklow and elsewhere throughout Ireland, often highlighting the struggles of Irish imprisoned hunger strikers alongside the Palestinian battles for freedom. The Irish republican socialist group, eirigi, has organized a number of events in solidarity with Kayed. 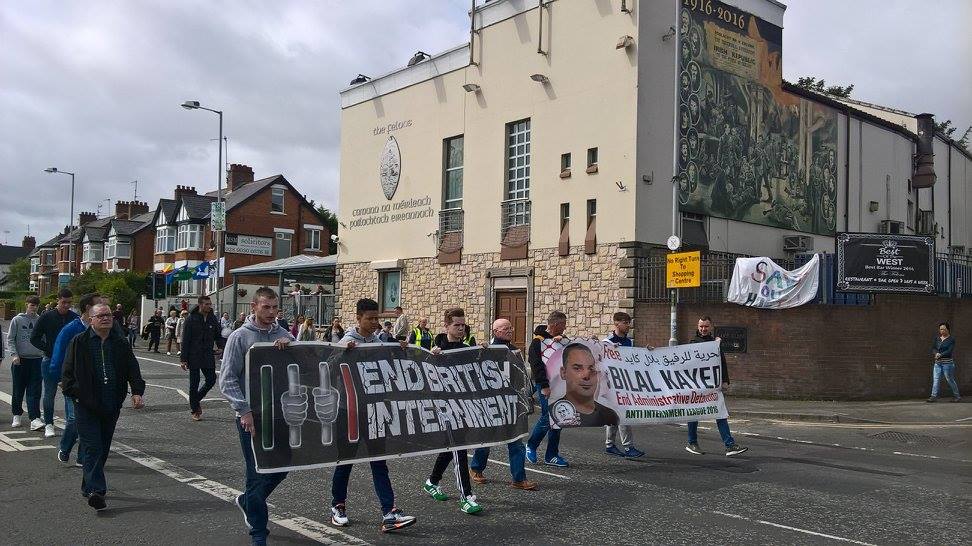 “The following letter was received from Palestinian prisoners in Nafha prison. It was forwarded to the Starry Plough by the Interational Relations Committee of the Popular Front for the Liberation of Palestine.

To the families of the martyrs oppressed by the British ruling class, To the familes of Bobby Sands and his martyred comrades,

We, revolutionaries of the Palestinian people who are under the terrorist rule of Zionism, write you this letter from the desert prison of Nafha. We extend our salutes and solidarity with you in the confrontation against the oppressive terrorist rule enforced upon the Irish people by the British ruling elite.

We salute the heroic struggle of Bobby Sands and his comrades, for they have sacrificed the most valuable possession of any human being. They gave their lives for freedom.

From here in Nafha prison where savage snakes and desert sands penetrate our cells, from here under the yoke of Zionist occupation, we stand alongside you. From behind our cell bars, we support you, your people and your revolutionaries who have chosen to confront death.

Since the Zionist occupation, our people have been living under the worst conditions. Our militants who have chosen the road of liberty and chosen to defend our land, people and dignity, have been suffering for many years. In the prisons we are confronting Zionist oppression and their systematic application of torture. Sunlight does not enter our cell; basic necessities are not provided. Yet we confront the Zionist hangmen, the enemies of life.

The noble and just hunger strike is not in vain. In our struggle against the occupation of our homeland, for freedom from the new Nazis, it stands as a clear symbol of the historical challenge against the terrorists. Our people in Palestine and in the Zionist prisons are struggling as your people are struggling against the British monopolies, and we will both continue until victory.

On behalf of the prisoners of Nafha, we support your struggle and cause of freedom against English domination, against Zionism and against fascism in the world.