As he enters his 54th day of hunger strike shackled hand and foot to his hospital bed in Barzilai Hospital, Bilal Kayed was declared an honorary citizen of the city of Naples, Italy.

Proposed by city councillor Mario Coppeto and the council group “Napoli in Comune a Sinistra” (Naples Common Left), the order expresses the solidarity of the city of Naples with Bilal Kayed and Palestinian prisoners subject to unjust imprisonment. It was adopted unanimously with two abstentions. 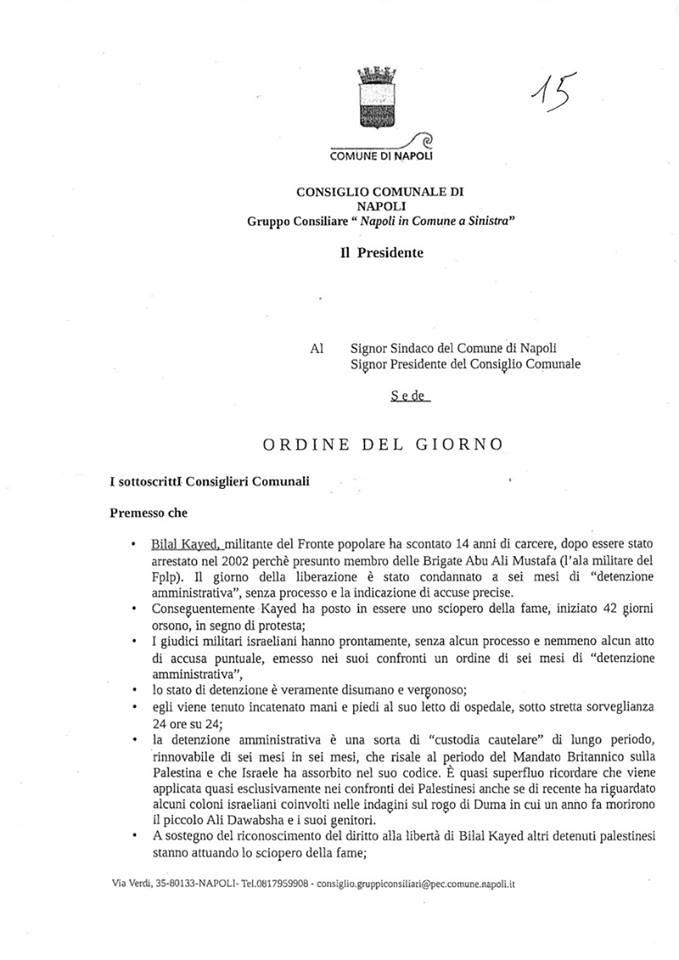 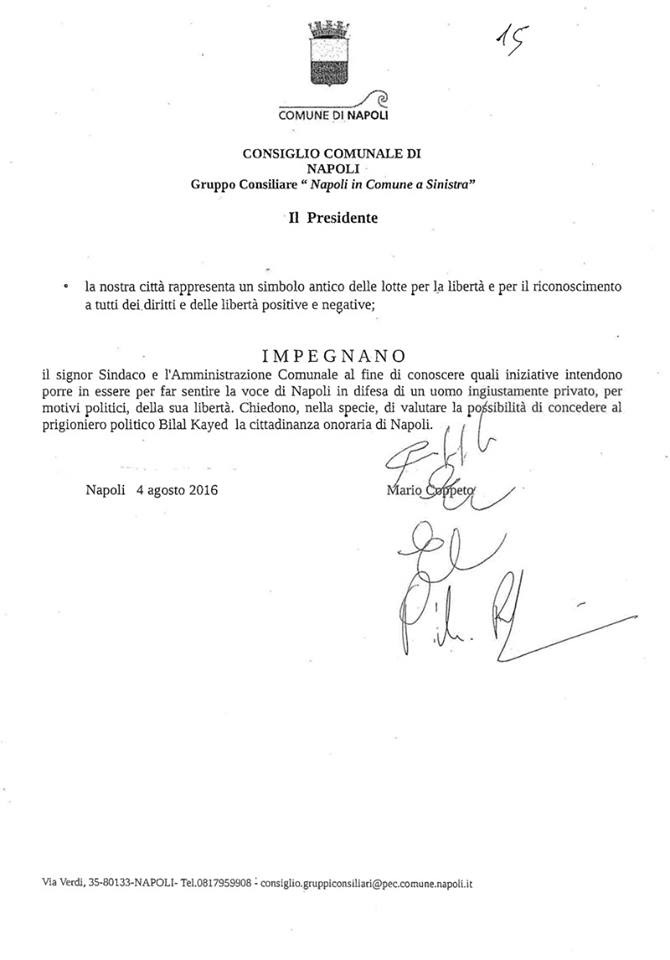 Dozens of fellow Palestinian prisoners are on strike in solidarity with Kayed, who launched his strike on 15 June in protest of the indefinitely-renewable six-month administrative detention order issued against him on 13 June upon the completion of his 14.5-year sentence in Israeli jails. His case represents a distinctly threatening precedent to all Palestinian prisoners completing their sentences, who could be ordered to indefinitely-renewable administrative detention without charge or trial.

Kayed, a leader within the prisons, has been joined by numerous comrades from the Popular Front for the Liberation of Palestine on his strike, including PFLP General Secretary Ahmad Sa’adat; his strike is supported by the Palestinian Prisoners’ Movement, composed of all the Palestinian factions in Israeli prisons.

Several hundred Palestinian prisoners, mostly affiliated with Hamas, launched a hunger strike on Thursday, 4 August in protest of the attacks on prisoners in Nafha prison and elsewhere; this group of striking prisoners ended their strike on Saturday, 6 August after an agreement regarding attacks by repressive guard units and related issues.

On Thursday, 6 August, Israeli prison administration lawyers defended the shackling of Bilal Kayed to his hospital bed, claiming that he is at risk of being seized in an attempt to free him, despite the presence of three guards constantly in his hospital room. Physicians for Human Rights filed a legal challenge to the ongoing mistreatment of Kayed in Barzilai Hospital, calling for him to be freed from his shackles and to have access to a doctor of his choice.

Haneen Nassar, speaking on behalf of the Palestinian Prisoners’ Committee, said that there is an escalating state of tension in Ofer prison especially as repression inside the prison increases while more prisoners join the collective hunger strike for Bilal Kayed’s freedom. Nassar’s husband, Rami Fadayel, is currently held in Ofer prison. She noted that prisoners are facing collective punishment and repression, including solitary confinement and a ban on family visits.

In Amman, the Wihda Party (Popular Democratic Unity Party) Youth organized a protest outside the offices of the International Committee of the Red Cross on Wednesday, 3 August in solidarity with Bilal Kayed and his fellow hunger strikers in Isaeli prisons. 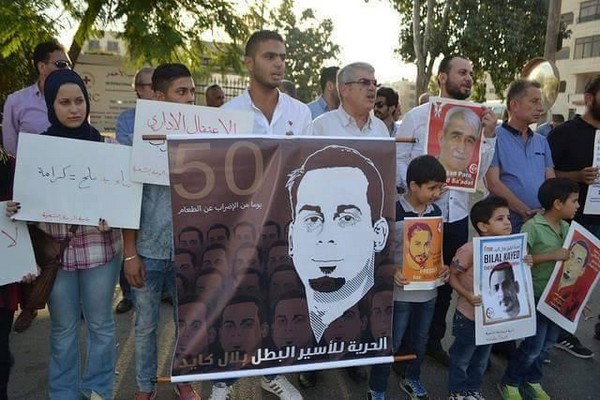 Protests throughout Palestine and internationally have continued to grow in support of Kayed. Protesters in Vancouver gathered for a “Boycott Israeli Wines” protest at a BC Liquor Store, calling for the boycott of wines produced in the occupation state including those from the occupied Golan Heights on Saturday, 6 August. They carried signs and literature demanding freedom for Bilal Kayed, Ahmad Sa’adat and their fellow Palestinian prisoners. 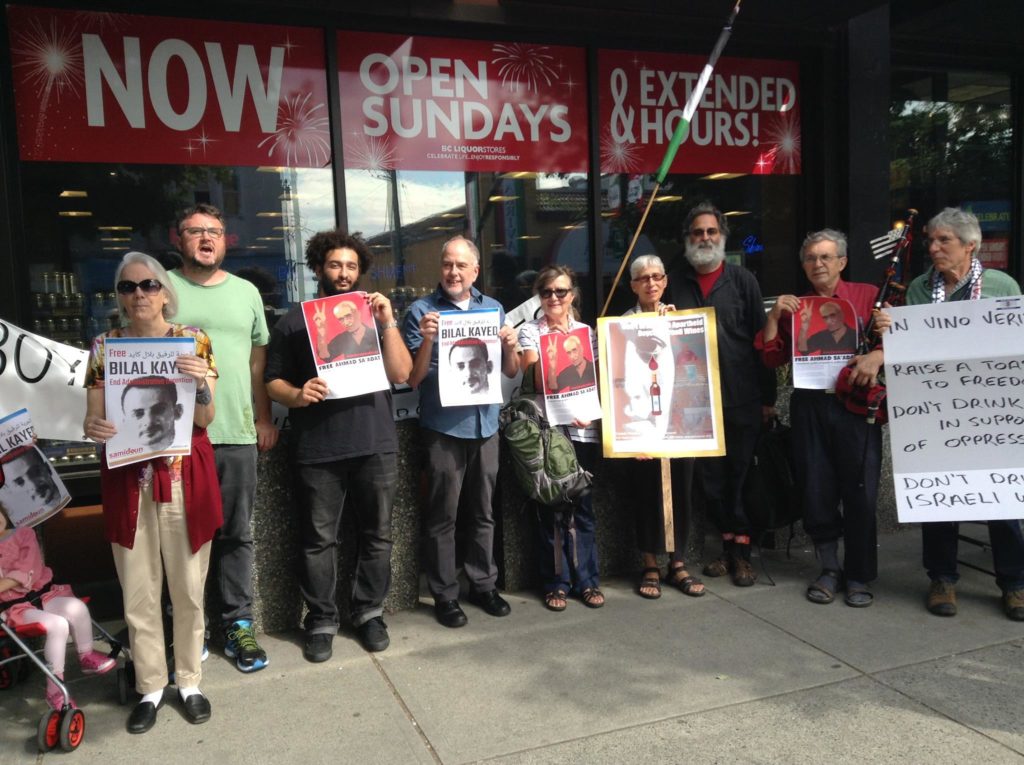 In Berlin, the Palestinian National Action Committee and the Democratic Palestine Committees joined with activists from BDS Berlin and other groups for an evening protest on 6 August at Potsdamer Platz, demanding freedom for Bilal Kayed and all Palestinian prisoners. 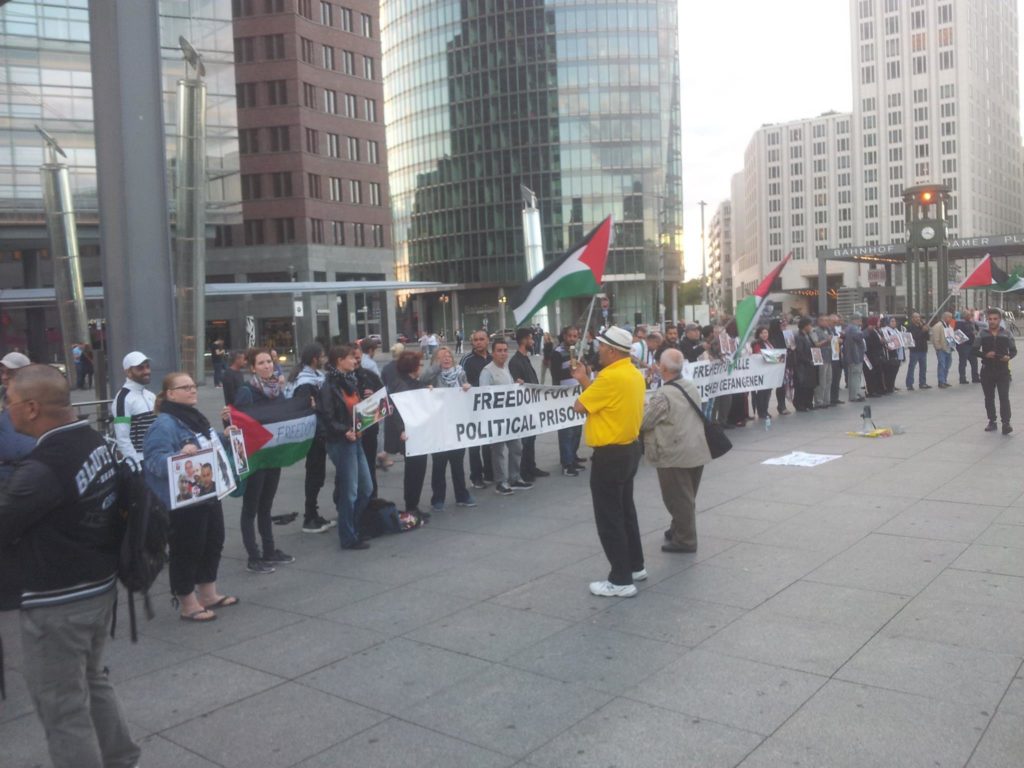 These protests followed on events in New York City, London and Wicklow on 5 August in support of Kayed’s strike.

In London, Inminds protested outside the offices of the ICRC to demand restoration of denied family visits and freedom for Bilal Kayed on Friday, 5 August. 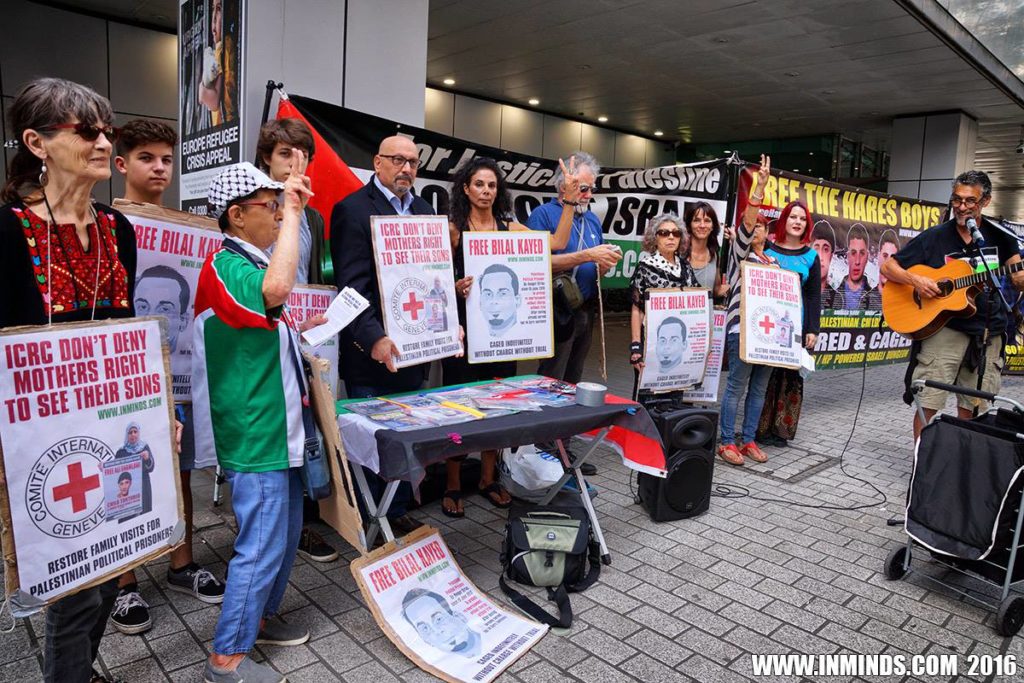 In New York City, Samidoun Palestinian Prisoner Solidarity Network organized their weekly protest outside the offices of G4S, demanding the corporation stop profiteering from occupation and contracting with Israeli prison services. They distributed literature and picketed outside the office, demanding Bilal Kayed’s freedom and that of his fellow prisoners. 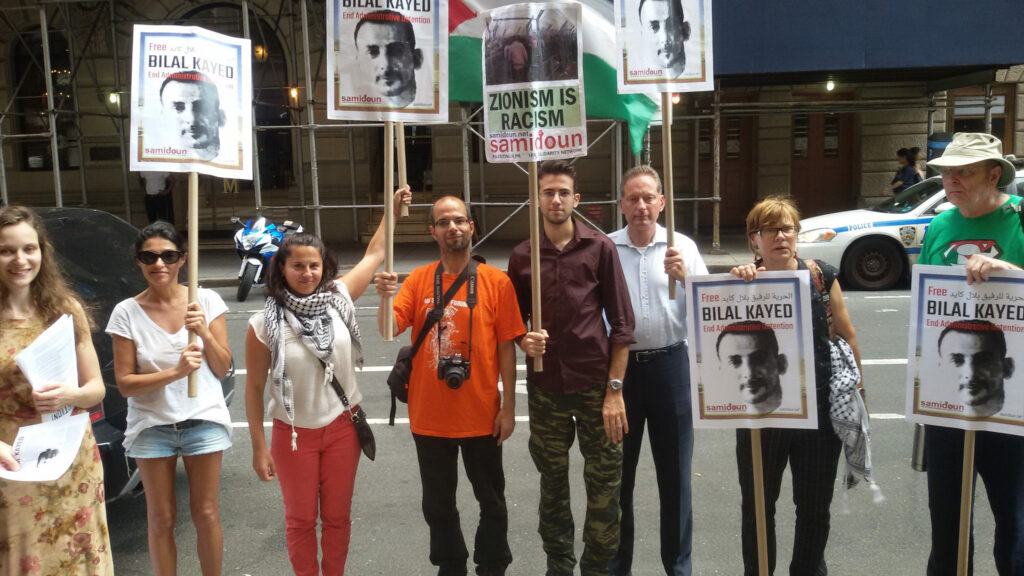 In Ireland, éirígí  organized actions on 5 and 6 August for Bilal Kayed’s freedom. In Wicklow, activists rallied and presented a letter to Wicklow city council urging the council to take a position on the case of Bilal Kayed and fellow Palestinian prisoners. On 6 August, eirigi activists in Galway dropped a large “Free Bilal Kayed” banner from the Spanish Arch and held an information table in the center of town. 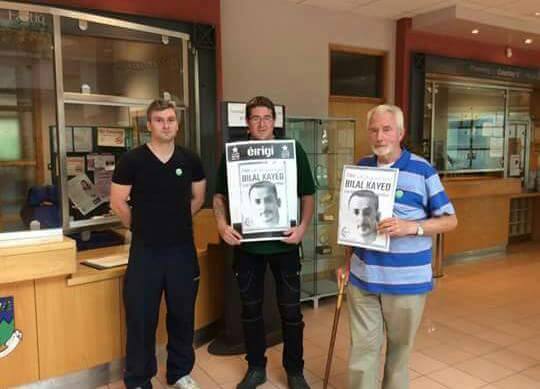 Forthcoming international protests are scheduled for Montreal, Copenhagen, Gothenburg, Brussels, New York City and other international cities. In France, the largest national coalition of organizations concerned with Palestinian rights, the National Collective for a Just Peace, sent a letter to Foreign Minister Jean-Marc Ayrault, urging action on the case of Bilal Kayed and an end to administrative detention.

These protests come amid escalating events inside Palestine and around the Arab world in solidarity with the striking prisoners, especially as the strike grows and Kayed’s health becomes more delicate.

In Ain el-Helweh refugee camp in Lebanon, the Youth Campaign to Free Bilal Kayed, composed of Samidoun and the Palestinian Youth Organization, continued its protests and organizing activities, leading up to a major event and protest in Beirut scheduled for 10 August. 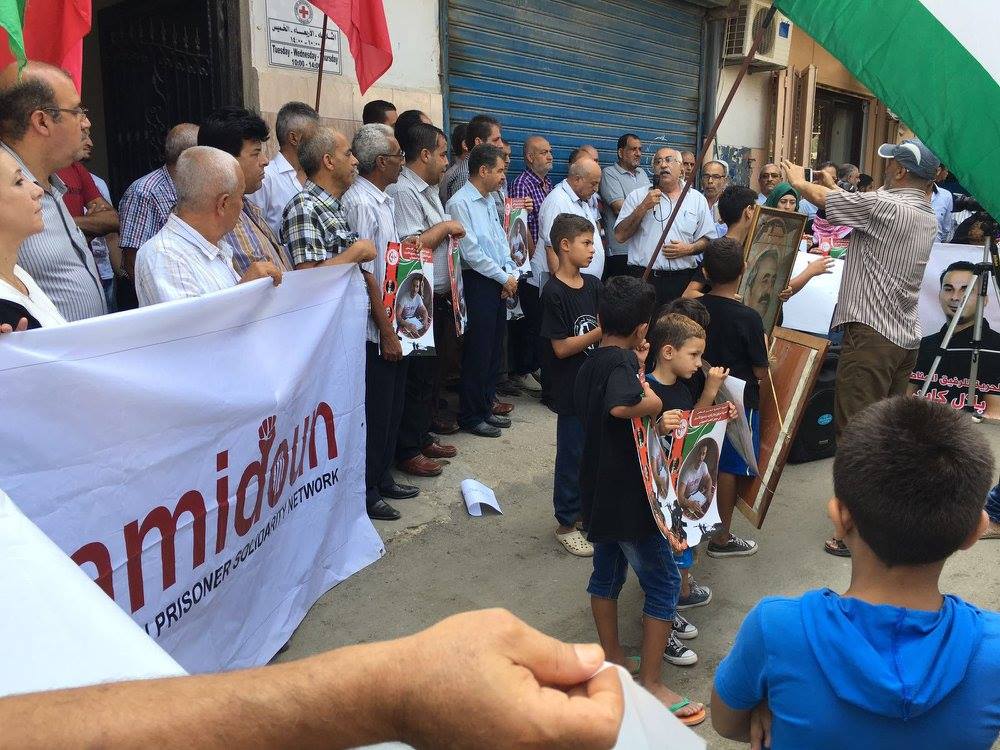 These come while protests in Palestine continue to grow in support of Kayed. Permanent solidarity tents have been erected with daily protests and actions in Ramallah, Nablus, Dheisheh refugee camp and Kayed’s hometown of Asira al-Shamaliyeh, while ongoing actions in cities and towns throughout occupied Palestine demand Kayed’s freedom. Actions planned in the coming week include protests in Jerusalem, Haifa and Asqelan by Barzilai Hospital.