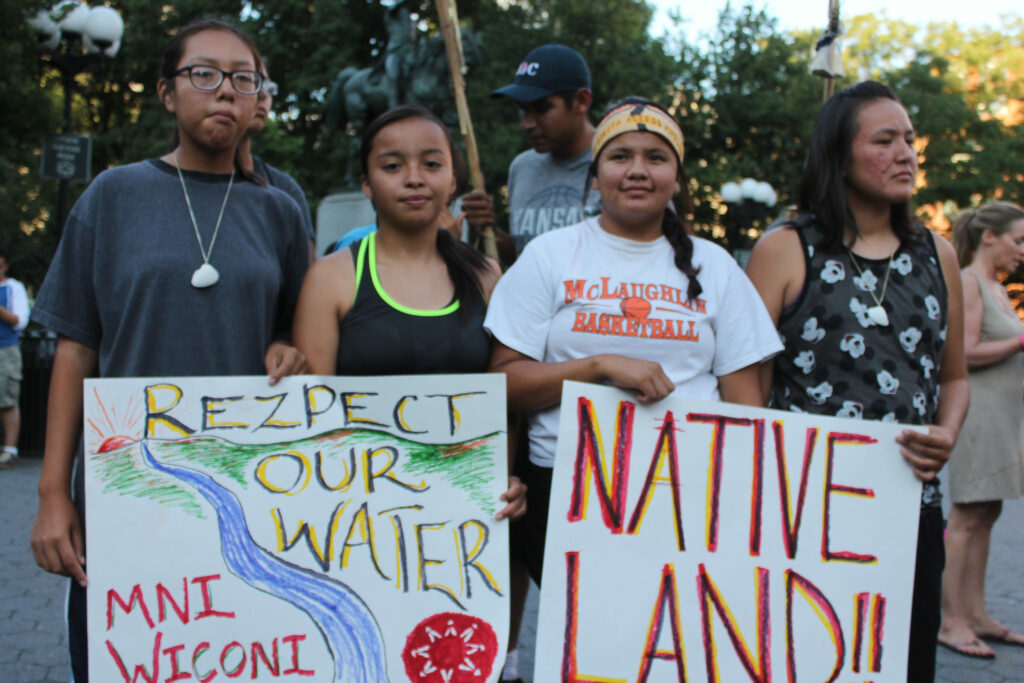 Samidoun: Palestinian Prisoner Solidarity Network expresses its strongest support for the Sioux nation and Native resistance in confronting the Dakota Access Pipeline and defending indigenous land from ongoing threats and attacks on the land and environment. We stand in solidarity with the Camp of the Sacred Stones, the 2,200-mile run by indigenous youth and all other ongoing efforts to stop the pipeline and similar destructive projects.

The Dakota Access Pipeline is an illegal and environmentally destructive project of the oil industry ripping through indigenous land. It threatens the drinking water of the tribe and would disturb sacred and cultural sites. As we stand with Palestinian land defenders targeted by the settler-colonial Zionist project, we emphasize our firm stand with indigenous land defenders in North America and full support for indigenous sovereignty and self-determination.

Settler colonialism and its theft of native land for the purpose of exploitation and the construction of colonial and imperialist power is a threat to indigenous peoples around the world and indeed, the future of the world itself. Today, the settler-colonial United States, built on the dispossession and genocide of indigenous people and nations – as well as the murderous and genocidal exploitation of Black labor through slavery – is the greatest threat to the environment and people of the world. It is also the strongest and largest backer and strategic ally of the Zionist settler-colonial project in Palestine that has ravaged indigenous Palestinian land for nearly 100 years.

The struggle against settler colonialism and the theft and plunder of indigenous land and resources, from North America to Palestine, is one that brings together Native struggles and the struggle of the Palestinian people. There is a history of mutual struggle and solidarity between Native strugglers in North America and the Palestinian liberation movement, from direct organizing in the United States to joint strategizing and action in the United Nations. Today, Palestinians and indigenous strugglers share a common goal of liberation from settler colonialism and defense of land and water from plunder and exploitation, as well as a common enemy engaged in an ongoing genocide threatening the very existence of indigenous life through intensified exploitation, colonialism, and massive securitization and criminalization.

The imprisonment of strugglers for liberation has always been central to colonial and settler-colonial projects. For the indigenous movement, resisting repression and political imprisonment – from COINTELPRO attacks on Native organizing to the political imprisonment of Leonard Peltier – has always been central to organizing, just as today the Standing Rock blockade is forced to resist police repression and imprisonment of land defenders at the camp blockading pipeline development. For Palestinians, over 7,000 political prisoners are held in Israeli jails, their political parties and movements criminalized and their leaders forced behind colonial bars. The struggle to free political prisoners and resist repression is critical to both Native and Palestinian struggles. As the blockade faces police and federal state repression, we affirm the fundamental right of indigenous peoples to resist and defend their land, people and societies under attack.

G4S, the world’s largest security company and second-biggest private employer, is subject to a global boycott campaign for its role in profiteering from the imprisonment of Palestinians: contracting with the Israeli prison system and other occupation agencies to provide control rooms, equipment and security systems for Israeli prisons, checkpoints, and even the Erez/Beit Hanoun Gaza border crossing where the siege on Gaza is imposed. The company is also notorious for its role in the imprisonment of youth in the United States and United Kingdom, and its involvement in migrant detention and deportation in the US, UK, Canada and Australia. In Canada, G4S provides security to pipeline and mining projects on stolen Indigenous lands and environmentally destructive tar sands mega-projects. Reports have noted that G4S is scheduled to provide “backup security” to the police that have arrested dozens of people at the site.

At this critical moment, it is essential for friends and supporters of the Palestinian struggle for liberation to extend our support to the struggle at Standing Rock. We encourage all to take action and join the struggle to stop the Dakota Access Pipeline and support the Standing Rock Sioux and the Sacred Stone Camp.