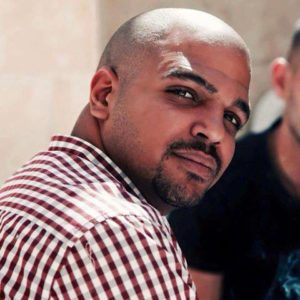 Israeli Magistrate’s Court in Jerusalem sentenced Palestinian Jerusalemite journalist and activist Samer Hussam Abu Aisha, 29, to 20 months in Israeli occupation prison. Abu Aisha has been imprisoned since 6 January 2016; he was attacked and abducted from inside the Jerusalem office of the International Committee of the Red Cross, where he and Hijazi Abu Sabih had erected a protest tent against the Israeli occuoation’s order expelling them from their city of Jerusalem. They held evening events, lectures and cultural programs in rejection of deportation and in defense of the Palestinian identity of Jerusalem.

The two organizers were leaders of a campaign against Israeli occupation orders of expulsion from Al-Aqsa Mosque and from the city of Jerusalem.  Their campaign included singing protests and other forms of cultural resistance and creative actions. On 16 December 2015, he and Abu Sbeih were delivered an order of expulsion from the city of Jerusalem for five months, citing “state security and order.” He had previously been arrested and harshly interrogated for 33 days, then released and banned from traveling outside Palestine. As soon as his house arrest ended, the Israeli occupation imposed the expulsion order upon them.

Abu Aisha went on hunger strike for 21 days in August in solidarity with Bilal Kayed’s demand for release from Israeli prison; he was part of a group of 35 prisoners from Gilboa prison who also demanded improved conditions inside the prison. Rawan Abu Aisha, Samer’s wife, said that the strike was in part prompted by ongoing denials of family visits.

Abu Aisha wrote earlier regarding the Israeli charges against him:

I was born in Jerusalem in 1987. I lived there all my life except for a few years during my studies in Egypt. As part of my work, I often travel to participate in conferences and youth exchanges in Arab countries and across the world.

Last August I travelled to Lebanon to participate in the 25th Arab Youth Camp. 28 hours after my return to Jerusalem on 17 August 2015, I was arrested by Israeli occupation forces and subjected to an interrogation that lasted 44 days. Eventually, I was conditionally released under open ended house arrest and accused of traveling to an “enemy state” in violation of the “Israeli” emergency regulations of 1952 which place a ban on travel to enemy state of the Zionist regime. These “laws” and policies are forced on us Palestinians despite the fact that we don’t recognize these laws, and the fact that Palestinians hold Lebanon to be a sister state which is naturally, geographically and culturally connected to Palestine.

The detention of Nasser Qous, Jerusalem director of the Palestinian Prisoners’ Society, was extended as well by Israeli occupation courts on 9 October; he had been assaulted and arrested by police forces in the Old City of Jerusalem and accused of “obstructing police work.”