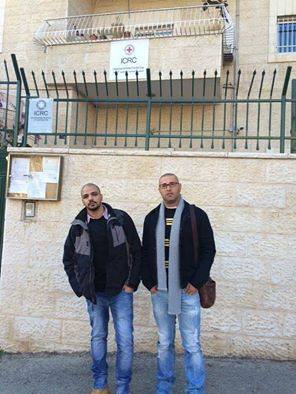 Palestinian activists, Samer Hussam and Hijazi Abu Sbaih, are taking refuge inside the headquarters of the International Committee of the Red Cross in Jerusalem in protest to refuse Israel’s orders of eviction, expelling them from their city, reported the International Solidarity Movement.

Israeli military orders are being issued banning Jerusalemite Palestinians from their home city, under Israeli occupation; as Samer Hussam notes, this month four Palestinian youth have been forcibly displaced from Jerusalem. This displacement follows upon the attempt to displace Khalida Jarrar from Ramallah to Jericho; the displacement of Daoud Ghoul and other young community leaders from Jerusalem; and the displacement of Palestinian parliamentarians Mohammed Abu Teir, Ahmad Atoun, Mohammed Totah and Khaled Abu Arafah, among a number of other cases.

The forcible displacement of people under occupation is a blatant violation of the Fourth Geneva Convention and other international conventions. In addition to the targeted forcible expulsion of Palestinian activists from Jerusalem, Palestinians in Jerusalem have been subject to ongoing racist exclusion and attacks, and collective policies of displacement and ethnic cleansing, including the eviction of longtime Palestinian Jerusalemites from their homes in favor of illegal settlers; the stripping of Jerusalem IDs from Palestinians on individual and collective basis, particularly threatening the Palestinian refugees of Shuafat refugee camp; and the demolition of Palestinian homes in Jerusalem.

I was born in Jerusalem in 1987. I lived there all my life except for a few years during my studies in Egypt. As part of my work, I often travel to participate in conferences and youth exchanges in Arab countries and across the world.

Last August I travelled to Lebanon to participate in the 25th Arab Youth Camp. 28 hours after my return to Jerusalem on 17 August 2015, I was arrested by Israeli occupation forces and subjected to an interrogation that lasted 44 days. Eventually, I was conditionally released under open ended house arrest and accused of traveling to an “enemy state” in violation of the “Israeli” emergency regulations of 1952 which place a ban on travel to enemy state of the Zionist regime. These “laws” and policies are forced on us Palestinians despite the fact that we don’t recognize these laws, and the fact that Palestinians hold Lebanon to be a sister state which is naturally, geographically and culturally connected to Palestine.

After 81 days under house arrest, “Israeli” courts cancelled my house arrest and on the same day I received an Israeli military order banishing me for five months from my city of birth, Jerusalem. These illegal practices and policies are increasingly being used against Palestinians; this month alone, four Palestinian youth were banished from Jerusalem. “Israel” aims to empty Jerusalem from its youth and we must stand against this policy. Therefore, I, Samer Hussam Abu Eisheh, declare that I won’t comply with this unjust banishment order and will be staying in the headquarters of the International Conmittee of the Red Cross in Jerusalem along with Hijazi Abu Sbaih who received a similar banishment order.