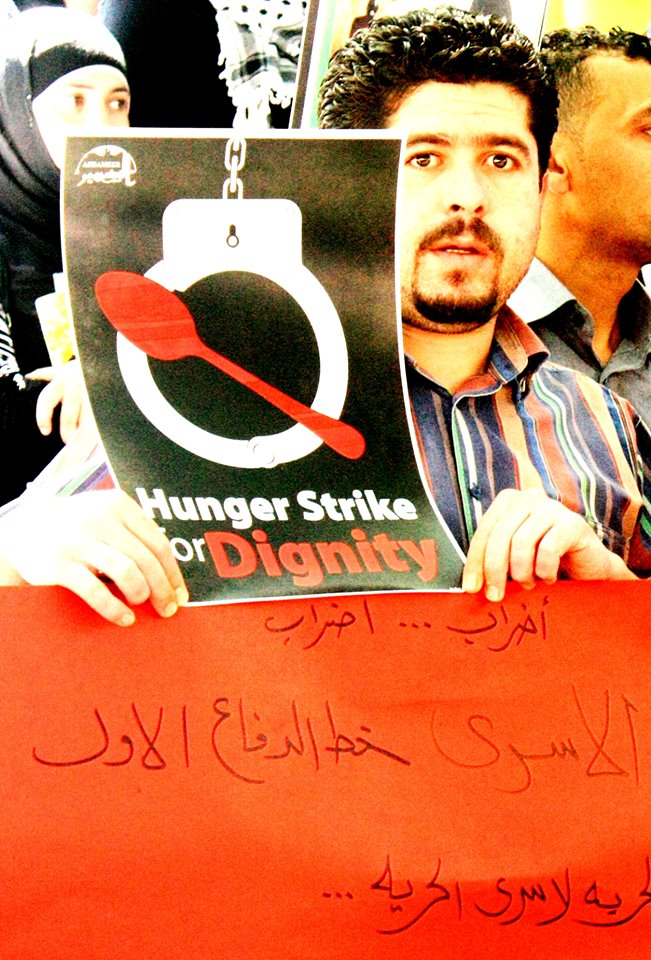 Palestinian lawyer Anas Barghouthi will once again face an Israeli military court on Tuesday, 6 December, after three years of ongoing hearings after he was arrested and released on bail in 2013. Barghouthi is a long-time human rights lawyer who currently focuses on representing Palestinians in the Palestinian Authority courts, particularly those arrested for political reasons.

He was arrested by Israeli occupation forces on 15 September 2013 and accused of affiliation with a “prohibited organization,” the leftist Palestinian political party, the Popular Front for the Liberation of Palestine and being a member of a committee to organize public protests and demonstrations. In a somewhat rare occurrence, he was released on bail on 23 October 2013 after a military judge declared that there was no sufficient evidence against him.

For three years, Barghouthi has been summoned every three months to a court hearing at the Ofer military court, during which the military prosecution has failed to present any witnesses against him. He has also been subject to an international travel ban and is prohibited from leaving Palestine. 6 December is the last hearing in which the military prosecution will have the opportunity to present witnesses against him and make their case; he is threatened with 18 months in prison.

Amnesty International has issued an urgent action alert in relation to the case of Anas Barghouthi, urging supporters around the world to advocate for the dropping of all charges against him as he is being charged based on his work as a lawyer and a defender of Palestinian political prisoners, noting that his persecution comes in the context of ongoing harassment, arrests, threats, intimidation and imprisonment of Palestinian lawyers, activists and other human rights defenders.

End harassment of Palestinian human rights lawyer
Israeli authorities have their final chance to take forward the prosecution of Palestinian human rights defender Anas Barghouti at a hearing on 6 December. Arrested and bailed three years ago, he has had to attend a court hearing every three months since then, only for the case to be postponed each time. He is facing a maximum of 18 months in prison.

Anas Barghouti, 33, is a lawyer and human rights defender who was arrested by the Israeli authorities on 15 September 2013. Amnesty International considered him a prisoner of conscience at the time because his arrest was based solely on his peaceful work as a human rights defender, representing Palestinians detained by Palestinian security forces. The Israeli military prosecution charged him with “membership of the Palestinian Front for the Liberation of Palestine” (PFLP), an organization which Israel has banned, and “leadership of a committee to organize demonstrations”. He denies both these charges. On 23 October 2013, a military judge ordered him released on bail because there was not sufficient evidence against him to consider him a security threat.

Since he was charged on 24 September 2013, Anas Barghouti has had to attend a court hearing every three months at Ofer Military Court in the occupied West Bank. However, each time he has attended the court, the prosecution has failed to produce the witnesses against him, and the case has been postponed for another three months. Each hearing means a lost day of work for Anas Barghouti, who has now set up his own legal practice in Ramallah, where he continues to represent Palestinians arrested by the Palestinian authorities. It is also a day of uncertainty for him and his family about whether he will be coming home. The hearing on 6 December is the last chance for the prosecution to produce the witnesses against Anas Barghouti, or the case will be dismissed.

Anas Barghouti told Amnesty International at his office in Ramallah on 8 November: “I would be happy if this case ends as it should – that I will not return to prison. That idea, no matter how much you have come to terms with it, is still extremely difficult.” He also hopes that the ban on travel the Israeli authorities placed on him since his arrest will be lifted.

Please write immediately in Hebrew or English or your own language:

PLEASE SEND APPEALS BEFORE 6 DECEMBEBR 2016 TO:

Please check with your section office if sending appeals after the above date. This is the second update of UA 276/13. Further information: https://www.amnesty.org/en/documents/MDE15/018/2013/en/

Anas Barghouti was arrested by the Israeli army at a military checkpoint north of Bethlehem in the Occupied Palestinian Territories on 15 September 2013. He had been on his way home to Ramallah after a visit to friends and family. At around 7pm Israeli soldiers stopped the car in which he was travelling and arrested him after he said he was a lawyer and presented his Palestinian Bar Association card. The soldiers confiscated his phone and questioned him, then blindfolded and handcuffed him and transferred him to a detention centre in the illegal Israeli settlement of Etzion. He was then taken to Ofer military complex where he was held until his release on bail. He was first presented to a military court on 16 September when a judge agreed to the military prosecutor’s request to extend his detention without charge until 22 September. On that date, his detention was again extended until 24 September when he was charged. He had a court hearing on 1 October at which his trial was postponed until 9 October and then adjourned again until 23 October, when he was released on bail.

Anas Barghouti spoke to Amnesty International about the effect his ongoing case has had on him: “The day of the court is a day gone, and it creates a tension within me and with my family. Especially when you’re in the court from 10am-4pm and your phone is taken away from you, so there’s no way for my family to know what is happening. When I have a hearing I make sure I clear my calendar, I make sure I have no work or social commitments. I am a lawyer, but when I go to court, this is nullified. The travel ban also makes me feel as if I am in a big prison – I can neither go inside Israel nor abroad.”

Military trials at Ofer Military Court are frequently postponed when the prosecution has failed to produce their witnesses – who are often other Palestinian prisoners, or members of the Israeli forces. Amnesty International has in the past expressed concern in certain cases that repeated and unjustified delays in trials were themselves a method of punishing Palestinians who were either detained or on bail. Palestinians face unfair trial before an Israeli military court, whose proceedings fall short of international standards for fair trial. Judges and prosecutors are recruited from the Israeli military. Judges are appointed by the Regional Commander on the Military Advocate General’s recommendation and promoted almost exclusively from the ranks of prosecutors. Once appointed, judges have no right of tenure and can be removed by the Regional Commander at any time. Serious doubts have been expressed about their impartiality. Trials are often based on confessions from witnesses who have been known to withdraw them later, saying they were made under duress. Defendants regularly resort to plea bargains even when they maintain they are innocent because they do not believe they will have a fair trial and feel they have no choice other than to accept a guilty plea which will lead to a reduced sentence.