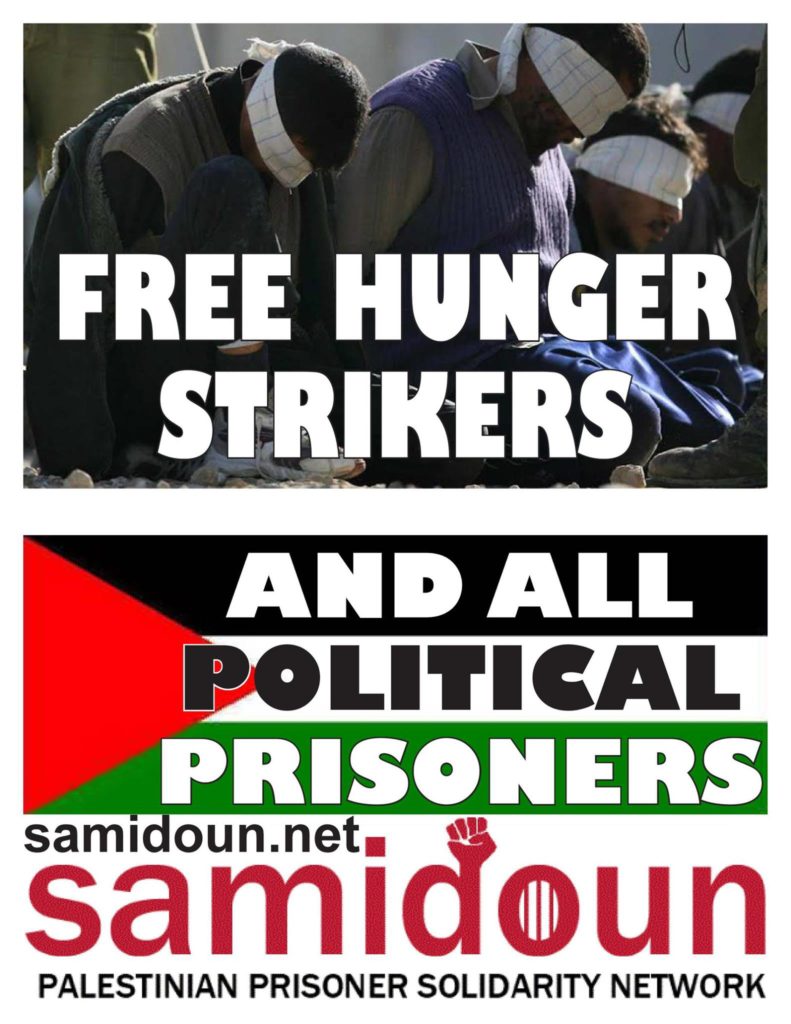 On Saturday, 22 April, 40 more prisoners in the Megiddo prison affiliated with Fateh and the Popular Front for the Liberation of Palestine joined the strike, prisoners’ representatives announced.  This came one day after an additional set of prisoners joined the strike in Ramon prison.

Issa Qaraqe of the Palestinian Prisoners’ Affairs Committee affirmed on Sunday, 23 April that no prisoners have ended their hunger strike, blasting reports in Israeli media that 88 prisoners ended their strike, including 86 prisoners in Gilboa and 2 in Megiddo. Qaraqe said that the opposite was in fact true as new prisoners were actually entering the strike. He said further that if these rumors are actually true, Israeli occupation authorities should stop blocking access to Palestinian lawyers to visit their clients and monitor their conditions.

The Palestinian Prisoners’ Society filed a complaint on behalf of lawyers who have been prevented from visiting Palestinian prisoners on hunger strike, within the framework of legal advocacy on behalf of the striking prisoners. Despite a declaration by the Israeli Justice Ministry that hunger strikers can receive visits, in practice, Palestinian prisoners continue to be denied legal visits. Lawyers are turned away or denied permits. In fact, only three hunger-striking prisoners in Ofer prison have been allowed to receive legal visits since the beginning of the strike on 17 April.

The Israeli occupation prison administration has continued to respond to the strikers with repression and abusive transfers. Strike leaders, including Marwan Barghouthi, Karim Younis, Mahmoud Abu Srour, Kamil Abu Hanish, Anas Jaradat and Wajdi Jawdat have been transferred to isolation in Jalameh prison, while even more striking prison leaders have been transferred to a number of prisons. These transfers take long hours or even days and are designed to add additional stress to hunger strikers’ weakened bodies. Adnan Hussein, Tareq al-Madal and Said al-Banna, all hunger strikers, were transferred from Nafha to Gilboa prison on Saturday, their sixth day of hunger strike. Al-Banna previously had a cancerous tumor removed in his bladder and his health remains fragile.

These actions continue amid other forms of repression, including continuous raids and inspections and punitive actions such as isolation, confiscation of clothing, blankets and books and denial of recreation, family visits and legal visits.

Meanwhile, large-scale support for the prisoners continued to grow in Palestine and internationally. The Palestinian trade union of university and college workers issued a statement on Saturday urging all segments of Palestinian society to support the prisoners’ strike. “The prisoners are a vanguard of our people and their symbls, the first line of defense for our people, land and holy places. They and their families and loved ones are experiencing great suffering through the repression of the occupation and its humiliating and unjust actions. We must stand with them and support them, their action and their demands by participating in all events, sit-ins, protests and actions,” the union said in a statement.

Alongside her four imprisoned sons, Nasser, Nasr, Sharif and Mohammed, Latifa Abu Hmaid has continued her own solidarity strike for a week outside prison, saying in an interview with Safa news that “I eat what my children eat and am hungry when they are….I am inspired to stand with them…and I am hungry with them.” Nasser Abu Hmaid has been transferred with other strike leaders to isolation in Jalameh prison, Mohammed has been transferred to Ramle prsion, while Sharif and Nasr are held in Ashkelon prison.

Actions and events throughout occupied Palestine continued in support of the prisoners. Hundreds marched in Ramallah banging pots and pans in support of the imprisoned strikers.  In ocupied Jerusalem in Silwan, a protest in support of the hunger strikers was attacked by 50 Israeli troops who shot stun grenades and rubber-coated steel bullets at the marchers, injuring Jerusalemite activst Suad Abu Rmouz.  Protests have been called on Sunday, 23 April for marches to checkpoints and roadblocks set up by Israeli occupation forces in the West Bank in a “day of rage.” In Salfit, Jenin and Ramallah, convoys of cars and taxis rallied with signs, horns and music in support of the prisoners.

Internationally, on 22 April, protesters gathered in Waterford, Copenhagen, Uppsala, Toronto, Lille, Manchester, London, Brighton, Berlin, Amsterdam and elsewhere to support Palestinian prisoners, while events and actions will take place on Sunday in Milan and Beirut, among other locations. International organizations, including the Non-Aligned Movement of 120 countries, issued statements in support of Palestinian prisoners and their struggle for dignity and freedom.

We urge all supporters of Palestinian prisoners and the Palestinian people to urgently take action and join in the campaign of solidarity to achieve their demands.

1) Organize or join an event in support of the hunger strikers. Protest outside your local Israeli embassy, consulate or mission, or at a public square or government building. You can drop a banner or put up a table to support the prisoners and their strike. See the list of current international events here, and add your own: http://samidoun.net/2017/04/schedule-of-events-actions-around-the-world-for-palestinian-prisoners-day-2017-week-of-action/

3) Boycott, Divest and Sanction. Join the BDS Movement to highlight the complicity of corporations like Hewlett-Packard and the continuing involvement of G4S in Israeli policing and prisons. Build a campaign to boycott Israeli goods, impose a military embargo on Israel, or organize around the academic and cultural boycott of Israel.