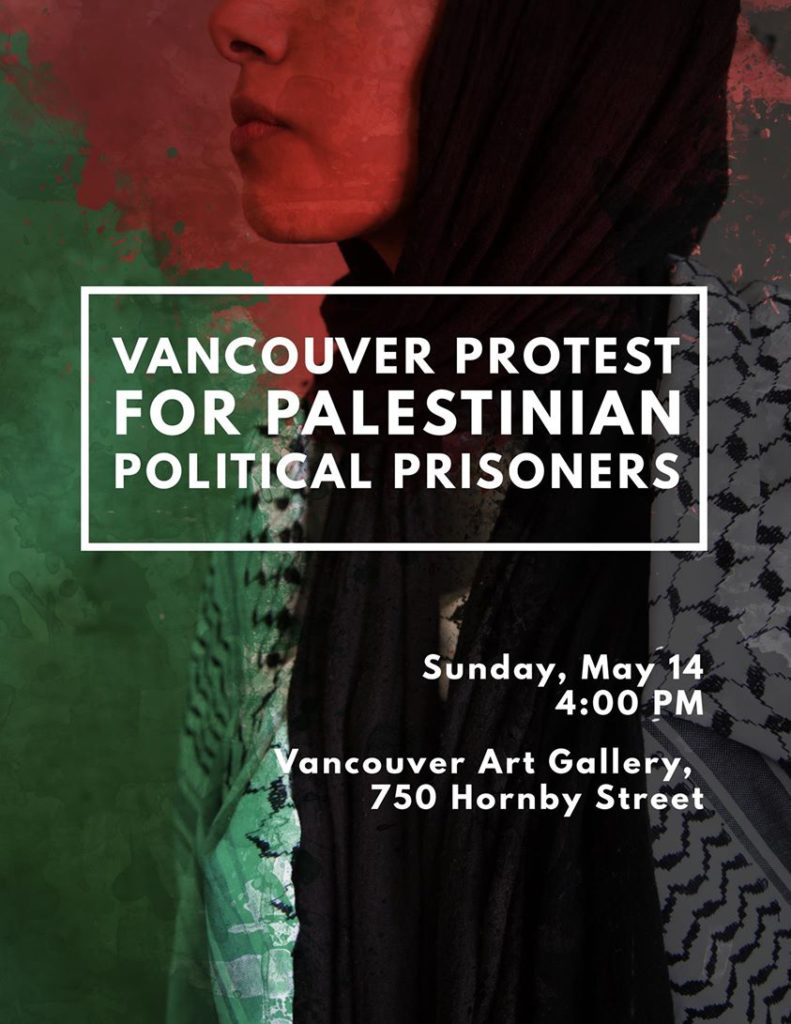 This event is taking place on the unceded territories of the Musqueam, Squamish and Tsleil-Waututh peoples.

More than 1,700 Palestinian prisoners in Israeli prisons began a mass hunger strike on April 17th. Their primary demands include:
-Allowing more frequent and lengthy family visits and allowing prisoners to take photographs with their loved ones
-An end to solitary confinement
-An end to administrative detention- prolonged detention without trial or charge. (currently there are more than 500 administrative detainees in Israeli jails)
-An end to medical negligence. More than 50 have died due to medical neglect and another 70 as a result of torture.
-Reduce restrictions on the entry of books, clothing, food, and other items from family members
-Improvements of prison conditions, which include installing public telephones in every prison and providing air conditioners

Currently Israel holds 6,500 Palestinian political prisoners in their jails, from which 500 are admistrative detainees, 57 are females, and 300 are children. Most prisoners have reported being: chained from their arms, beaten, placed in solitary confinement, deprived of sleep, and routinely threatened with harm of family members.

Join us in Vancouver to stand in solidarity, to chant and rally together and shed light on the plight of Palestinian prisoners instead of the silence that is being put forward by mainstream media!
#DignityStrike #Vancouver #Palestine #HungerStrike

Schedule:
[4:00pm – 4:30pm]
————————–——————–
Meet up and chants: While we wait for everyone to gather come and get to know your fellow activists. Bring your best chants or come up with some with your friends and get involved. This time will also include performance art where children will represent the children held in Israeli detention.

Tarek Ramadan – Head of the Outreach Committee of the Muslim Association of Canada, Human Rights Activist, Writer, and Poet

[5:00pm – 5:30pm]
————————–——————–
Audience Participation: Have something to say about the plight of Palestinian political prisoners? Here is your chance to get engaged and tell us how you feel and take part in the Saltwater Challenge!