On Friday, 19 May, Palestinian prisoners entered their 33rd day of the collective hunger strike launched by 1500 Palestinian prisoners – out of a total of over 6300 Palestinian political prisoners in Israeli jails –  on 17 April 2017, Palestinian Prisoners’ Day. The strikers are demanding basic human rights, including an end to the denial of family visits, proper medical care and treatment, access to higher education and an end to solitary confinement and administrative detention, imprisonment without charge or trial.

On Thursday, 18 May, the 32nd day of Palestinian prisoners’ collective hunger strike, the Israel Prison Service transferred large numbers of strikers to Beersheva, Shatta and Ramle prisons, concentrating the hunger strikers in prisons that are home to the so-called “field hospitals” created by the prison administration. These prisons are also close to Israeli civilian hospitals. These transfers, however, were carried out via the “bosta” through the arduous transfer process that has been used again and again to put additional stress on the weakened bodies of the strikers in an attempt to undermine their strike.

At the same time that the mass transfers of hunger strikers continued, Israeli occupation forces attacked demonstrations in support of the prisoners’ strike and an illegal Israeli colonial settler murdered one Palestinian protester, Moataz Hussein Bani Shamsa, 23, from the village of Beita near Nablus.

Israeli occupation forces attacked the protesters and defended the settler who killed Bani Shamsa and injured Palestinian journalist Majdi Eshtayyeh. Ma’an News stated that the army “spokesperson said she was unable to comment on whether the Israeli settler had been detained or reprimanded in any way for opening live fire on the Palestinian crowd.” Israeli education minister Naftali Bennett portrayed the settler who murdered Bani Shamsa, shot Eshtayyeh, and then rammed his car into an ambulance coming to assist them, as the victim. The uninjured settler on Palestinian land was “brutally attacked” by the existence of Palestinians on the road throwing stones against the occupying forces on their land, in Bennett’s words; Bennett then claimed that “any one of us…would have acted” as he did in murdering Bani Shamsa as an occupying settler on Bani Shamsa’s land who got out of his car to shoot live fire on Palestinians.

Bani Shamsa is the second Palestinian to be killed by Israeli occupation soldiers or settlers while participating in protests in defense of the prisoners and the fifth Palestinian overall killed by Israeli forces since the beginning of the strike.  Saba Obeid, 22, himself a former prisoner, was killed in Nabi Saleh village by Israeli occupation forces as he participated in a march on 12 May.  Colonial settlers on the road near Huwwara in Nablus celebrated the murder of Bani Shamsa by distributing sweets to other settler cars on the road.

As protests continued in support of the prisoners, marchers near Qalandiya refugee camp in Ramallah were attacked on Wednesday night, 17 May, by Israeli occupation forces, shooting live bullets and tear gas at the marchers. In Jerusalem, a sit-in outside the offices of the International Committee of the Red Cross was attacked by occupation forces who seized three participants: Ahmad al-Safadi, director of the Elia Media Group, Mohammed al-Daqqaq and Kayed al-Daqqaq. Areen Zaanin was violently assaulted by Israeli forces and taken to hospital.

As Israeli repression continues to escalate outside the prisons, inside the prisons, the strikers’ health continues to deteriorate. Many strikers are extremely dizzy and fatigues and have difficulty walking or standing, and there are great fears of heart slowdowns or sudden drops in blood pressure. A number of strikers have fainted and some are vomiting blood.

As part of the mass transfer campaign inside Israeli prisons, numerous leaders were once again transferred. Ahmad Sa’adat, the imprisoned General Secretary of the Popular Front for the Liberation of Palestine, fellow PFLP leader Ahed Abu Ghoulmeh, Hamas prison leaders Hassan Salameh and Abbas Sayyed, longest-held Palestinian prisoner Nael Barghouthi and journalist Mohammed al-Qeeq were all transferred from Ohli Kedar prison to Nafha prison, all in isolation. Handala Center for Prisoners and Former Prisoners reported that the health of Sa’adat and al-Qeeq is particularly fragile and requires hospitalization.

International actions also continued in support of the strike. United Nations officials, including Special Rapporteur Michael Lynk, expressed concern about Palestinian prisoners, especially the large-scale use of administrative detention, imprisonment without charge or trial, in violation of international law.

In Spain, climber Carlos Blanca displayed his solidarity with hunger-striking Palestinian prisoners while climbing Aneto Peak, the highest mountain in the Pyrenees, on 17 May.

Chilean Senator Alejandro Navarro spoke about the case of the Palestinian prisoners on hunger strike in parliament, urging action to support their cause. 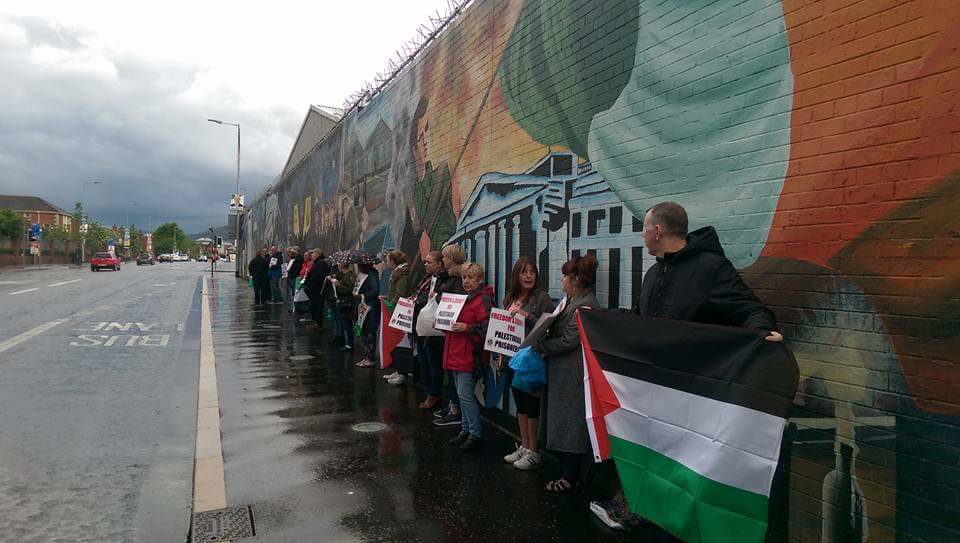 In Belfast, protesters gathered at the famous International Wall where the Irish republican struggle is highlighted in murals – along with a number of murals in support of Palestine – for a protest in support of the Palestinian prisoners, while in London, activists responded to the call for action to pressure the International Committee of the Red Cross by picketing and delivering a letter to the ICRC’s office, demanding meaningful action for Palestinian prisoners.

In Glasgow, Hellemmes, Belfast, Evry, Chicago, Milan, Buenos Aires, Granada, Sevilla, Manila and Malaga, protests were organized in the last days in support of the strikers. On Friday, 19 May, events and actions are scheduled in Saint-Denis, Brussels, Milan, Cadiz, San Roque, Aravena, Mans, New York City, Berlin, Cagliari, and Copenhagen. A full list of actions around the world is available at the Samidoun website.