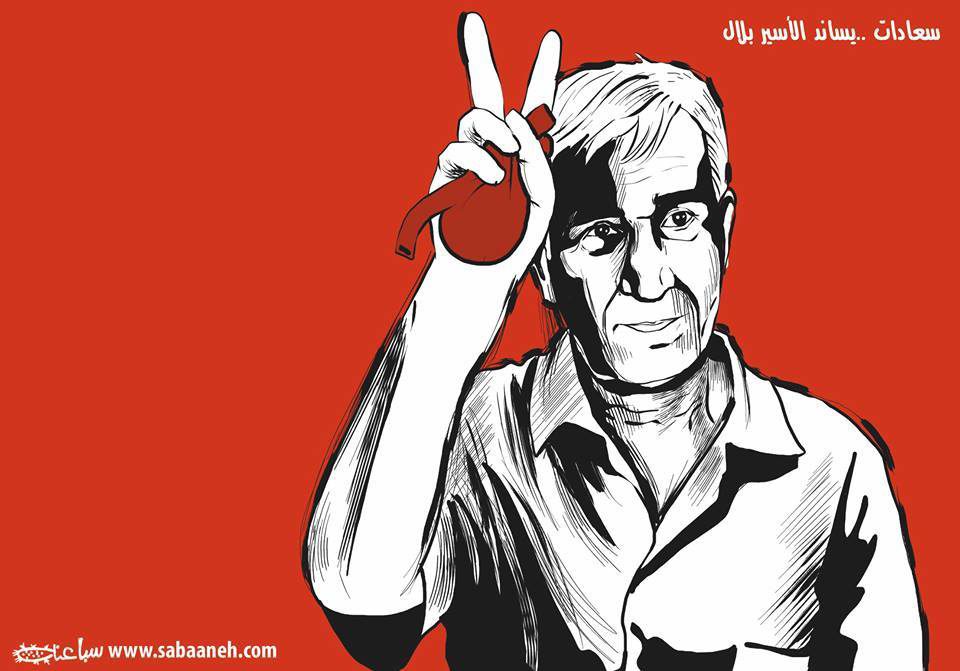 “The will of the strikers derives from the will of the Palestinian people, which has not been defeated and will not be defeated. and victory is inevitable,” said Ahmad Sa’adat, imprisoned Palestinian leader, in his legal visit today at Ohli Kedar prison with Farah Bayadsi, a lawyer with Addameer Prisoner Support and Human Rights Association.  This is Sa’adat’s first legal visit since joining the hunger strike; prior requests were repeatedly denied until Addameer submitted a High Court petition on 10 May 2017.

Sa’adat, the imprisoned General Secretary of the Popular Front for the Liberation of Palestine, was transferred on Thursday, 11 May into isolation in Ohli Kedar prison from isolation in Ashkelon prison. He was thrown into isolation along with other prominent Palestinian leaders who joined the collective hunger strike on 4 May, including Abbas Sayyed, Hassan Salameh, Ahed Abu Ghoulmeh, Nael Barghouthi, Bassam Khandakja, Mohammed Ramadan and Rami Halabi; this group of 38 leaders was again transferred into isolation in Ohli Kedar. The use of frequent and abusive transfers, as well as isolation and solitary confinement, is a tactic being used by the Israeli prison administration in order to pressure the strikers into breaking their strike.

The hunger strike was launched on 17 April, Palestinian Prisoners’ Day, by 1500 Palestinian political prisoners in Israeli jails. The prisoners have a range of demands, mostly highlighting basic needs and human rights, including an end to the denial of family visits, the right to proper health care and medical treatment, the right to pursue distance higher education and an end to solitary confinement and administrative detention, imprisonment without charge or trial.

Addameer reported that Sa’adat was brought to the visit in handcuffs and showing signs of severe fatigue and weight loss of about 10 kilograms (21 pounds). His face was pale, he was gaunt in appearance and he spoke and walked very slowly. During the isolation and transfers of the striking prisoners, their personal clothing was confiscated and a prison uniform imposed upon them. Sa’adat stated that he and his fellow strikers are currently consuming only water as the Israel Prison Service confiscated the salt of the transferred strikers as well as that of 20 other prisoners who have been on strike since 17 April. Even more, they are drinking from the tap rather than the usually provided drinking water, which has been denied to the strikers since they began their hunger strike.

He emphasized that the medical examinations provided in the prison are insufficient to verify the health of the prisoners, as striking prisoners’ blood pressure and weight are the only aspect of the strikers’ health examined. Furthermore, he noted that the conditions of life in section 4, where the strikers are held, are very difficult. In each room, 10 prisoners are held, deprived of hygiene supplies and personal needs and denied fans despite intense heat. They are only allowed to leave the rooms to the prison yard for one hour each day. Independent doctors have been denied access to the hunger striking prisoners.

Sa’adat said that the Israeli prison administration is carrying out punitive policies in an attempt to break the strike and exhaust the will of the prisoners. In particular, he noted that striking prisoners are taken, shackled, to the recreation yard and held in the sun, standing, twice daily during repressive inspection raids despite their physical weakness and exhaustion. He also noted the same conditions that have been experienced by hunger strikers throughout the Israeli prison system, including prohibition of access to the “canteen” (prison store), a total ban on family visits and a fine of 200 NIS ($60 USD) imposed on each hunger striker. Sa’adat noted that this comes in an attempt to undermine the strike and the prisoners’ will.

In this context, he noted that Israeli prison officials attempted to show him the video displayed in Israeli media that claims to depict Marwan Barghouthi. He “refused to watch the video as it is a product of the corrupt occupation and one of its desperate tricks that seeks to break the morale and steadfastness of the prisoners, and break the popular, mass solidarity with the prisoners’ movement and its struggles,” said Sa’adat. “We must beware of such games and rumors from various quarters and in various forms, especially from the prison authority and the circles of the government that are trying to imply that Marwan Barghouthi has ended his strike. These attempts will not be successful in deceiving our people,” Sa’adat said.

The prisoners are firmly adhering to their collective demands and their strike until victory, Sa’adat emphasized, despite attempts by the prison administration to break the prisoners’ morale and the popular support for their struggle. Despite their fatigue and weight loss, Sa’adat emphasized that the hunger strikers’ morale remains high and their commitment firm to continue the strike.

Samidoun urges the organizing of events and actions to support the prisoners, rallying at Israeli embassies, federal buildings and public squares. These actions around the world will help to underline the global support for Palestinian political prisoners in their struggle for freedom, and the struggle of the Palestinian people for liberation. As noted in Ahmad Sa’adat’s statements in his legal visit today, the actions of Palestinians and their supporters around the world are important in both putting pressure on the Israeli occupation and in helping to support the prisoners’ morale and steadfastness despite intense physical suffering and harsh repression. We urge the escalation of the campaign for boycott, divestment and sanctions against Israel and complicit corporations like HP and G4S – to support the prisoners in achieving the demands of their hunger strike, their freedom, and the freedom of the land and people of Palestine.

You can download flyers and posters for your events to support the prisoners among our resources.