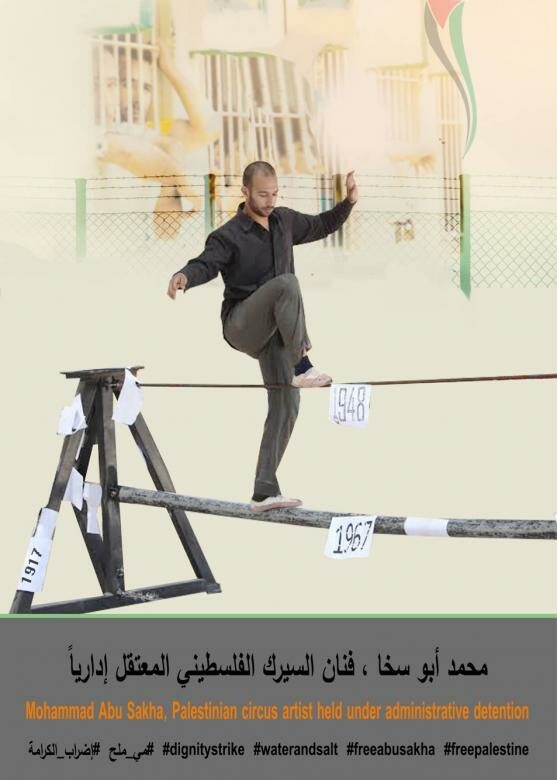 Palestinian circus performer Mohammed Abu Sakha has now been on hunger strike for 29 days as part of the Strike of Dignity and Freedom. Abu Sakha, who has been held in administrative detention without charge or trial since 14 December 2015, is one of the 1500 Palestinian prisoners who launched the hunger strike on 17 April 2017.

The hunger strike has several key demands for basic human rights, including an end to the denial of family visits, the right to pursue distance higher education, appropriate health care and medical treatment and an end to solitary confinement and administrative detention, imprisonment without charge or trial.

Abu Sakha is a trainer with the Palestinian Circus School and has worked with the school since 2007; he has traveled around the world with the school and participated in numerous circus tours in Palestine. He specializes in working with children with special needs at the school. However, his international tours and training have been put on hold due to the repeated extension of his imprisonment without charge or trial.

On 11 May, Addameer Prisoner Support and Human Rights Association reported that an extension of Abu Sakha’s detention – scheduled to expire on 11 June 2017 – has been limited to a maximum of three months, following an appeal by lawyer Mahmoud Hassan. The military prosecutor requested to renew the detention order once more for an additional six months; however, Addameer reported, “the judge agreed to renew the order for three months under the condition of no further renewal.”

One of the key demands of the hunger strike that Abu Sakha joined is an end to administrative detention. He is one of over 500 Palestinians imprisoned without charge or trial under these indefinitely renewable orders. The policy of administrative detention dates back to the era of British colonialism in Palestine and has been preserved and extended by the Israeli occupation.

The campaign to free Abu Sakha has been supported by artists, circus performers and cultural workers around the world, with actions in many countries organized to demand his freedom. Artistic and cultural solidarity for the prisoners has continued, including the #DignityStrike campaign of Decolonize This Place, featuring new art daily in support of the prisoners.