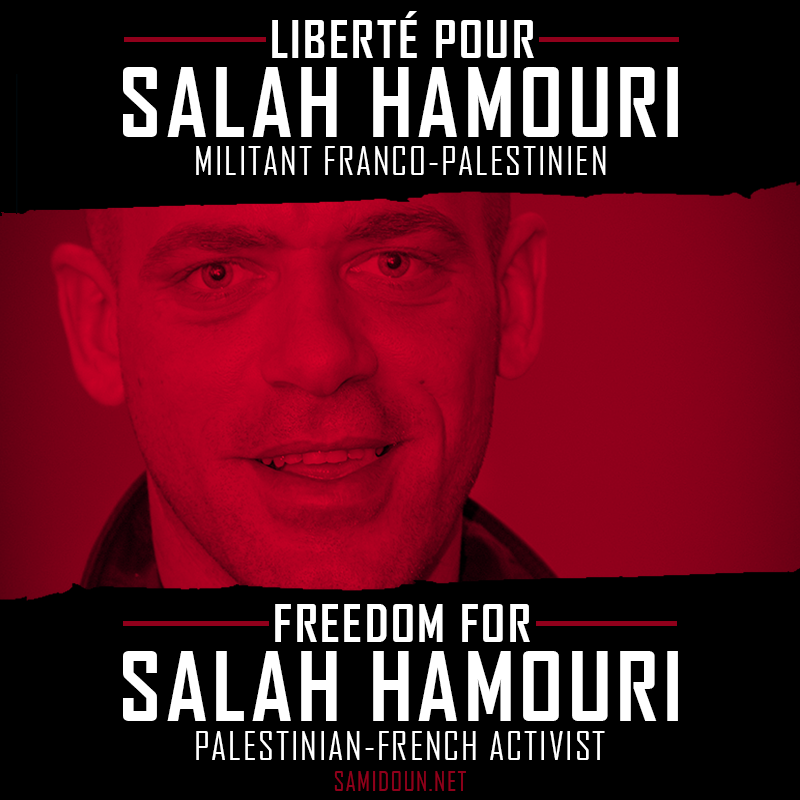 Salah Hamouri, French-Palestinian human rights defender and activist, was ordered to six months imprisonment without charge or trial under an Israeli administrative detention order on Tuesday, 29 August. The order, which is indefinitely renewable, will expire on 22 February 2018, reported Addameer Prisoner Support and Human Rights Association, where Hamouri, 32, is a field researcher.

The order came less than half an hour after the Jerusalem Magistrate’s Court had ordered him to be released on conditions; he had already received a decision ordering him to house arrest in Reineh, a village in the north of occupied Palestine ’48 for 20 days, followed by a three-month ban from entering Jerusalem, his home city, or traveling outside Palestine. He was ordered to pay 10,000 NIS bail ($2794) USD and receive third-party guarantees of his house arrest.

However, when his family arrived promptly at the Moskobiyeh interrogation center to pay the bail for his release, they were informed that he was instead being ordered to administrative detention, Israeli imprisonment without charge or trial. Israel has continued and expanded the practice of administrative detention introduced in Palestine by British colonial powers during the Mandate era and tens of thousands of Palestinians have been jailed without charge or trial under Israeli occupation orders.

As Hamouri is a Jerusalemite Palestinian, the order for his imprisonment without charge or trial came directly from the Minister of Defense, the extreme right, racist Israeli politician Avigdor Lieberman. Lieberman is known for his advocacy of “transfer” of Palestinian citizens of Israel, advocacy for mass killing in Gaza and calling for the execution of Palestinian prisoners.

Salah Hamouri is a former Palestinian prisoner who was released in 2011 as part of the Wafa al-Ahrar prisoner exchange. During his prior detention, he was the subject of a large campaign throughout France by Palestine activists, leftist organizations and defenders of human rights, demanding that the French state act for the freedom of their citizen. The video below, by Chris DenHond, shows an action in the Council of Paris by EuroPalestine activists in 2009, when that very council was honoring occupation soldier Gilad Shalit, then captured by the Palestinian resistance in Gaza, while remaining silent on the imprisonment of Hamouri.

Since his release, Hamouri and his family have been subjected to repeated, repressive actions by the Israeli occupation. Hamouri’s pregnant wife, Elsa Lefort, was denied entry to Palestine and remains banned from entering her husband’s homeland with their child. He has been banned from traveling to the West Bank, including while he was in the process of completing a law degree that would require him to breach the ban. Indeed, this latest arrest comes only three days after he passed the Palestinian bar exam on 20 August to practice professionally as a lawyer in Palestinian courts.

Addameer wrote, “This arrest and decision is but one in a list of many, where the occupying power has attempted to stifle the legitimate pursuit of Palestinian human rights and basic dignity. For those who dare to speak up against this oppressive colonial regime, arbitrary detainment awaits….For human rights defenders, there are two choices. Give up on your cause, or accept the life of constant punishment. It is not an easy choice to make. Salah could easily leave, live in France, and have a quiet life with his wife and child. Though, he stays as an example for us all. He remains in to the place of his birth and struggles for those who the occupation seeks to reduce from humans to subjects. For the assertion that he, and the people he serves, are human, the occupation ensures that he pays the price.”

Hamouri has been an international representative of the Palestinian cause and the prisoners’ struggle, speaking at the World Social Forum in Brazil, large events across France (including the main stage at Fete de l’Humanite) and Israeli Apartheid Week in Belgium in February 2017, among many others.

Samidoun Palestinian Prisoner Solidarity Network reiterates its urgent demand for the immediate release of Salah Hamouri and all Palestinian prisoners and call for the French state to defend the rights of their citizen and take action for Salah Hamouri’s freedom. It is no less critical now; it must be made clear that it is unacceptable to imprison Hamouri – or any other Palestinian – without charge or trial. This is clearly an attempt on the part of the Israeli state to target an effective, local and international human rights defender working for Palestinian freedom.

The French state must take real action to demand freedom for Salah Hamouri, the Palestinian human rights defender. From the jails and the courts of the occupation to the cities and campuses of the world, he is a consistent and clear voice against oppression and for liberation. Free Salah Hamouri! Libérez Salah Hamouri!

1. SIGN this petition to French president Emanuel Macron and European officials. Demand that they act now to free Hamouri: https://www.change.org/p/emmanuel-macron-demand-the-immediate-release-of-human-rights-defender-salah-hamouri

2. SIGN this French-language petition to the French government to demand they act for Hamouri’s freedom: http://liberezsalahhamouri.wesign.it/fr