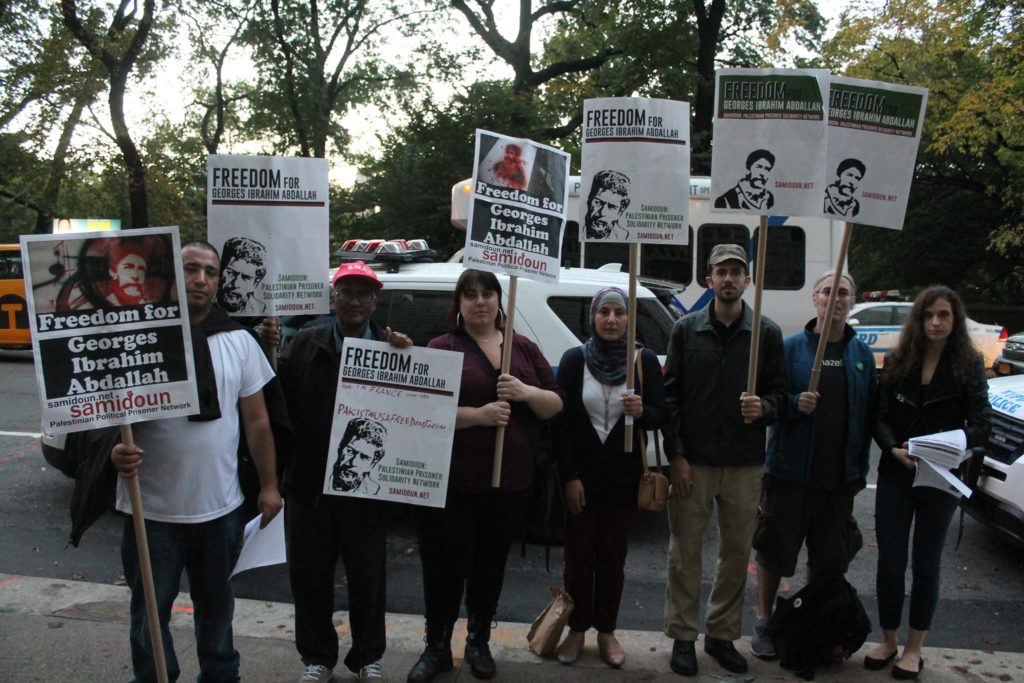 October 24, 2017 marks the 33rd anniversary of the arrest of Georges Ibrahim Abdallah, revolutionary Lebanese Arab Communist struggler for Palestine, by French police. Since 1984, he has remained behind bars, one of the longest-held political prisoners in the world. From October 14-24, 2017, Samidoun Palestinian Prisoner Solidarity Network joins organizations in France and around the world to call for a week of international actions to demand freedom for Georges Ibrahim Abdallah and all Palestinian prisoners!

Georges Abdallah has been committed throughout his life to the revolutionary struggle in Lebanon and the liberation of Palestine. He was involved with the Palestinian leftist organization, the Popular Front for the Liberation of Palestine, resisting Israeli attacks on Lebanon. Later, he joined other Lebanese revolutionary leftists in the Lebanese Armed Revolutionary Factions, pointing to a non-sectarian, socialist and revolutionary path to liberation for the people of Lebanon, faced with civil war militias and Israeli invasion and occupation in the south of Lebanon.

Georges Abdallah was originally arrested for allegedly carrying false documents; his detention was repeatedly extended as French intelligence searched for information to charge him with involvement in armed actions that killed a U.S. diplomat and an Israeli representative in Paris. Even one of his lawyers was reportedly involved in spying on Abdallah for the French intelligence agency. While he was supposed to be exchanged with prisoners held by Arab revolutionaries, the French state reneged after obtaining their own prisoners, keeping Abdallah as a prisoner (samidoun.net/2017/09/call-to-action-14-24-october-free-georges-abdallah-and-all-palestinian-prisoners).

Meanwhile the administrative detention order against French-Palestinian lawyer Salah Hamouri, ordering him imprisoned without charge or trial for six months, was confirmed on Sunday, September 17. The confirmation of the order for his imprisonment without charge or trial came after a roller coaster of charges and sentences following his seizure by Israeli occupation forces on August 23 in a pre-dawn raid on his home in Kufr Aqab near Jerusalem.

Demand France fulfill its obligations to free Abdallah and secure the release of Hamouri.