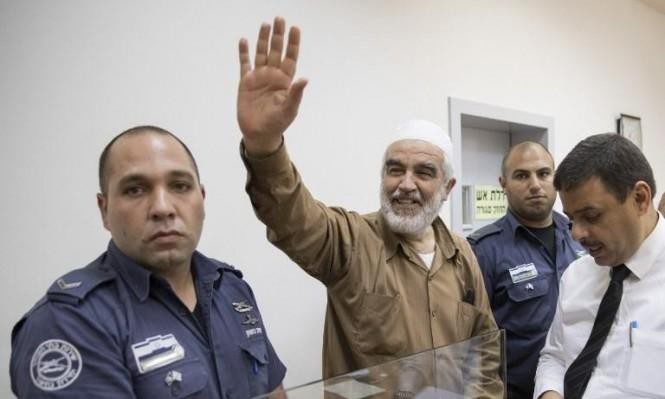 Sheikh Raed Salah, leader of the Islamic Movement in occupied Palestine ’48 and a prominent defender of Al-Aqsa Mosque against Israeli settler attacks, is currently held in solitary confinement in Ramon prison in the Naqab desert, said his lawyer Khaled Zabarqa after a meeting with Salah on 4 October, as reported by Wattan TV.

Zabarqa said that Salah is charged with “incitement” for speeches about Al-Aqsa during the Palestinian campaign against new electronic gates and other occupation repressive technology installed at the holy site in July 2017, as well as for performing prayers at the funerals of three young men from Umm al-Fahm killed by Israeli forces after participating in an attack that killed two occupation armed “border police” in Jerusalem. He is also accused of supporting a “prohibited organization,” the Islamic Movement, which was declared prohibited in 2015 in what Palestinians from across the political spectrum in occupied Palestine ’48 denounced as an attack on the entire Palestinian people.

“Sheikh Salah will remain faithful to the Islamic, pan-Arab and Palestinian principles despite his arrest and the conditions of his detention,” said Zabarqa, noting that Salah’s morale is high and that he sends greetings to all his supporters. Zabarqa further said that the indictment file against Salah is “fabricated” for political purposes.

Sheikh Salah is prevented from mixing with or seeing other Palestinian political prisoners and has also been denied books for reading. Salah was released in January 2017 after eight months of imprisonment for a speech he gave in 2009; during his imprisonment, he was also held in solitary confinement for the entire time, denied visits, including from Knesset members, and denied access to books and reading material.

Israeli occupation officials have also been involved in attempts, including in the United Kingdom, to deny Salah an international platform for advocacy. He has been subjected to repeated travel bans by the Israeli state and has also been repeatedly barred from entering Jerusalem itself.