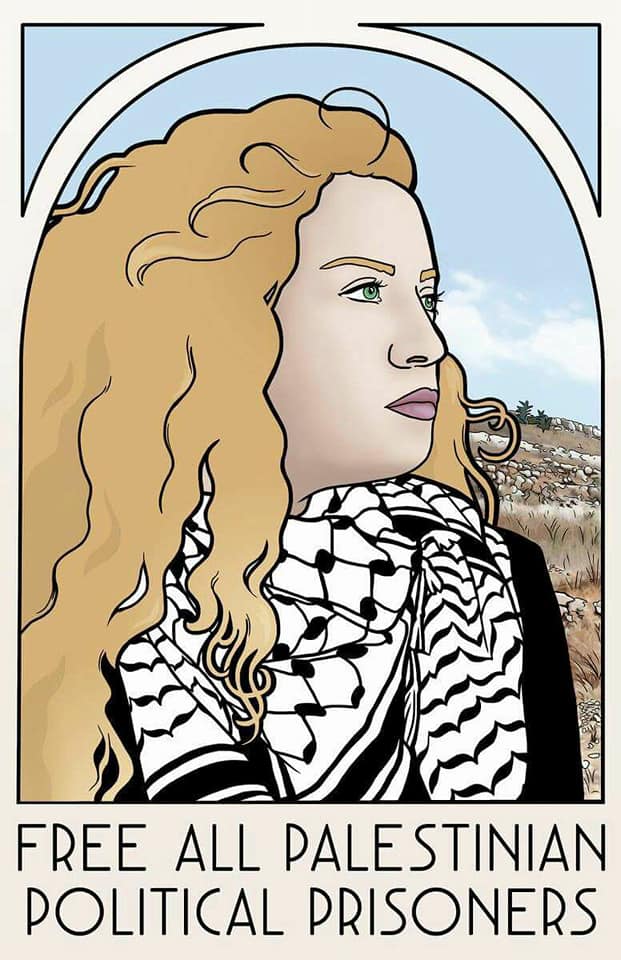 The detention of Ahed and Nariman Tamimi was extended by the Ofer military court until Wednesday, 19 January in a hearing on Monday, reported Bassem Tamimi, Ahed’s father and Nariman’s husband, in a post on Facebook.

Defense attorney Gaby Lasky called for their immediate release while the prosecution demanded the extension of their detention for 101 days; the military court delayed its decision on their continued imprisonment throughout their military trial until Wednesday.

Bassem reported that Ahed and Nariman are frequently transported on the arduous, infamous “bosta” system but that they are kept in different vehicles at all times, and that Ahed’s “bosta” trips are taken with Israeli criminal prisoners who lob racist insults and threats at her. Ahed said that she is studying four classes from her school curriculum and has read two additional books outside the curriculum.

“Ahed asked us all to focus on every imprisoned woman and child and to work towards a campaign to highlight their cases,” Bassem said.

International campaigns to free Ahed and her fellow prisoners are continuing to put pressure on the Israeli occupation. Amnesty International issued a call for her release as the military court hearing took place; in addition, demonstrations on Monday and over the weekend in New York, Toulouse, Berlin, London, Brussels, Porto, Lisbon, Braga, Athens, Rome and elsewhere demanded her freedom. Protests are planned in the coming days in New York, Paris, Marseille, Copenhagen, Nimes, Lyon, Berlin, Arlington, Montevideo and elsewhere.

Samidoun Palestinian Prisoner Solidarity Network denounces the arrest of Ahed Tamimi and Nariman Tamimi, the latest of well over 500 Palestinians arrested by Israeli occupation forces following U.S. President Donald Trump’s declaration of recognition of Jerusalem as the capital of Israel. Approximately half of those detained, like Ahed, Abdul-Khalik Burnat and Fawzi al-Junaidi, are children. There are hundreds of Palestinian children jailed by Israel and frequently subject to beatings, abuse, and interrogations without parents or lawyers present in violation of the law. We urge people of conscience around the world to take action to demand freedom for Ahed and her fellow detained and jailed Palestinian children in occupation detention centers, interrogation centers and prisons – and for Nariman Tamimi and all detained and imprisoned Palestinians.