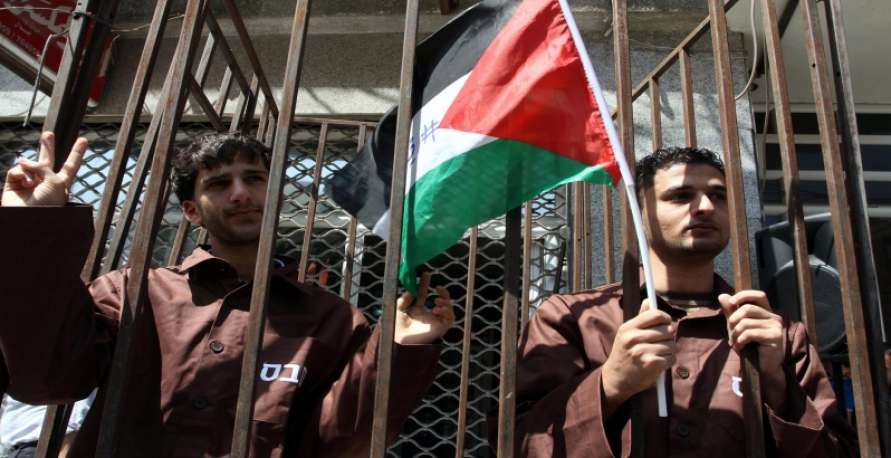 Palestinian prisoners in Israeli jails are escalating their protests of administrative detention, imprisonment without charge or trial. Addameer Prisoner Support and Human Rights Association released a statement on 13 February from administrative detainees pledging to boycott Israeli military courts from 15 February 2018 in order to demand an end to the practice.

Administrative detention was first brought to Palestine by the British colonial mandate; today it continues to be used by the Israeli occupation at a systematic and extensive level. Over 450 Palestinians are currently jailed without charge or trial. Administrative detention orders are issued for one to six months at a time; they are indefinitely renewable and Palestinians can spend years at a time jailed with no charge or trial under repeatedly renewed detention orders. This policy is used against children as well; in the past two years dozens of Palestinian children have been imprisoned without charge.

As we go ahead with this collective step, we put our faith and trust in our people, their power and institutions, and in the civil society which will not leave us alone in this fight. We also call on all human rights organizations, the lawyers union, the Palestinian Prisoner Club, and the Commission of Detainees and ex-Detainees to help us in this step and boycott all administrative detention courts with us. This is a national patriotic act that should not be violated by any individual or institution, so we call on the Palestinian Authority to make a submission to international criminal court on the issue of administrative detention as soon as possible. Finally, we call on forming media, legal and public committees to support us in this campaign.

Administrative Detainees in the occupation prisons

The Prison Branch of the Popular Front for the Liberation of Palestine issued a statement on 14 February, noting that this action comes after several months of discussion between the factions of the prisoners’ movement in order to prepare to take a strong step. They noted that “over many years, the prisoners have engaged in battle after battle to end the policy of administrative detention, including collective and individual battles of the empty stomach, but this remains an open file and an ongoing crime committed by the occupying state against our people.” The statement called upon all lawyers to abide by the decision to boycott the courts for administrative detainees so as to not give false legitimacy to the facade of judicial procedures adopted by the occupation military courts. It also urged escalating the struggle to end administrative detention to international courts to seek justice and accountability.

Rizk Rajoub, 61, is once again on hunger strike for the 10th day against his administrative detention; after previous agreements to end his strike, he has remained jailed without charge or trial and is demanding his release. Instead of charging or releasing him as he demanded, they issued a new six-month administrative detention order against him. Ashraf Radi Abu Zahab is also on hunger strike for the ninth day in the Negev desert prison against his own imprisonment without charge or trial.

In addition, Munir Hantash, from Qalqilya, is on hunger strike for the ninth day, demanding clarity over the date of his release after a 16-year sentence; he has been imprisoned since 2002 and has been given varying release dates of 20 February, 7 March and 20 August. Rusaila Shamasneh has been on hunger strike for 10 days against her isolation and that of her daughter.

The Israeli occupation military court in Ofer has issued 47 administrative detention orders so far since the beginning of February, reported Palestinian lawyer Mahmoud al-Halabi on Thursday, 8 February, including renewing the order against journalist Hammam Hantash, 26, for another six months; he has been imprisoned since 15 February. Palestinian youth activist Saleh al-Jaidi was also subjected to another six months of imprisonment without charge or trial; the young organizer from Dheisheh camp has been imprisoned since September 2017.

The detention orders included the following: