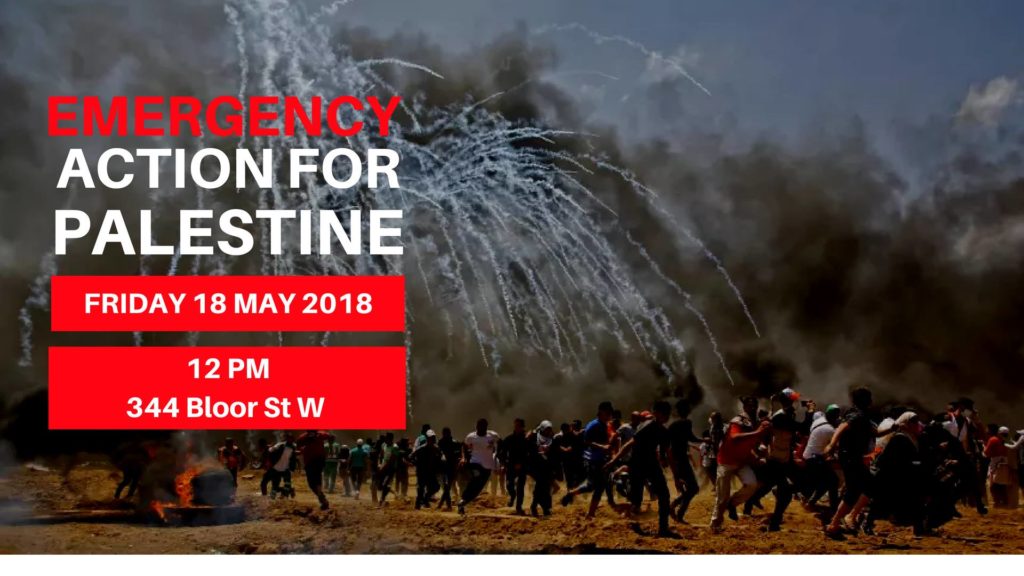 We are holding an emergency action outside Foreign Affairs Minister Chrystia Freeland’s office to urge the Canadian government to condemn Israel’s latest massacre of at least 60 Palestinians and its injury of 2,700 more, including Palestinian-Canadian Dr. Tarek Loubani. We will be providing flags, banners, and leaflets, staging a die-in, and delivering a petition to Minister Freeland’s Office.

Since its founding 70 years ago, Israel has established a brutal apartheid regime, which privileged Jews over non-Jews, as outlined by a recent landmark UN report, (Falk and Tilley 2017). Under this regime, native Palestinians have been denied basic rights, such as their right of return, as stipulated by UN Resolution 194. Since 1967, Israel has also maintained an illegal military occupation over the West Bank, East Jerusalem, and Gaza.

Canadian silence is complicity with Israeli crimes. Canada needs to live up to its obligation as a high signatory under Article 1 of the Fourth Geneva Convention, which requires the Convention is upheld in all circumstances. Our domestic legislation, the Special Economic Measures Act, also calls for action when gross and systematic human rights violations have been committed in a foreign state.

Based on international and domestic law, we call on the Canadian government to condemn Israel’s violations of international law, including its illegal occupation, building of illegal settlements, and imposition of a siege on Gaza.

We call on the Canadian government to launch an investigation into the injury of Canadian-Palestinian Dr. Tarek Loubani by the Israeli army.

We demand the Canadian government denounce the opening of any embassies in Jerusalem, as this act is illegal under international law.

We also call on Canada to impose sanctions against Israel, similar to the sanctions that were imposed against apartheid South Africa, until Israel complies with international law. We support Amnesty International’s call for an immediate, global, and comprehensive arms embargo on Israel.