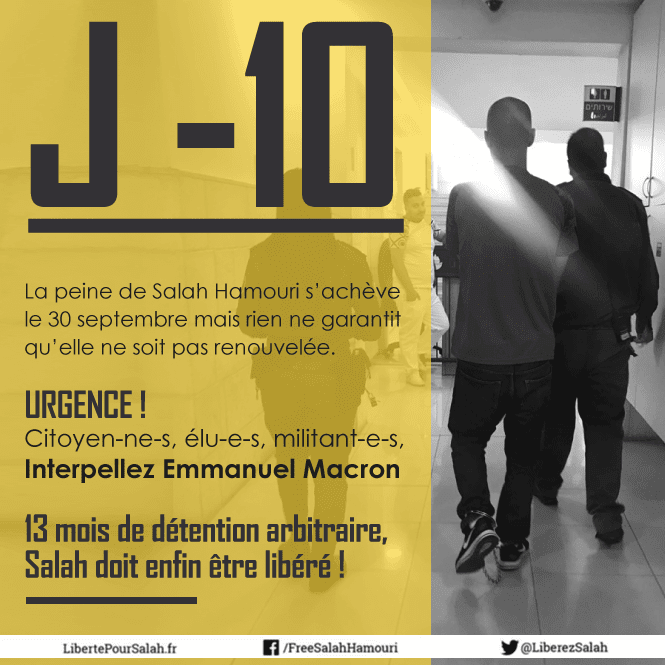 Salah Hamouri, the French-Palestinian lawyer held without charge or trial under administrative detention, will see his current detention order expire on 30 September. These expiration dates have come and gone in the past with much sorrow, as his detention has been repeatedly renewed, approved by far-right, racist Israeli Defense Minister Avigdor Lieberman.

Dozens of French cities and towns and over 1,700 elected officials have joined the call for the release of Hamouri, who is a French citizen as well as a Palestinian Jerusalemite. However, despite weak requests for Hamouri’s release, the French government inaugurated the “France-Israel season” with a showy joint celebration featuring President Emmanuel Macron and Israeli Prime Minister Benjamin Netanyahu.

On 16 September, Elsa Lefort, coordinator of the campaign and Hamouri’s wife – herself barred from Palestine by the Israeli occupation – spoke before the annual Fete de l’Humanite in Paris, urging freedom for Hamouri:

The campaign to free Salah Hamouri has issued a call for urgent messages to French president Emmanuel Macron, demanding action and serious pressure from the French government for Salah’s release, using the hashtag: #LiberezSalah

Administrative detention is arbitrary and illegal imprisonment used by Israel to oppress the Palestinian people. President Macron must call for the immediate and unconditional release of Salah Hamouri with the greatest strength. #LiberezSalah