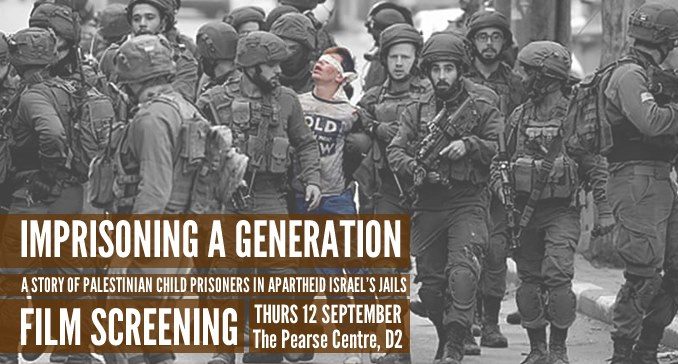 On Thursday 12th September 2019 you are invited to a special screening of ‘Imprisoning A Generation’, an important documentary about Palestinian child prisoners in Apartheid Israel’s jails. There will also be a screening of the short film ‘Breaking The Generations’. The films will be shown from 6:15pm in The Pearse Centre, 27 Pearse Street, Dublin 2 (map here).

Today there are some 5,500 Palestinian political prisoners, including 500 interned without charge or trial, 50 women, and 200 children. Every year Israeli occupation forces arrest around 6,000 people, including an average of 700 children. The imprisonment regime is an important aspect of Israel’s total domination of the lives of Palestinians.

Israel tries Palestinians – including children – in apartheid non-jury military courts which are inherently unfair and which have a 99.7% conviction rate where trials last an average of five minutes. Amnesty International says these “proceedings do not meet international standards for fair trial”.

Israel also uses a form of indefinite internment without trial called Administrative Detention “to suppress the legitimate and peaceful activities of activists in the Occupied Palestinian Territories”, according to Amnesty.

We invite you to come along and learn more about the plight, struggles, hopes and fears of generations of Palestinian political prisoners – especially children – whose lives have been invaded by Apartheid Israel, even as Israel holds the entire Palestinian people captive under occupation or in enforced exile.

A film that explores Israel’s widespread and systematic use of detention, and explores the consequences on the health of Palestinian prisoners, who face widespread, institutionalized medical negligence inside Israel’s prisons.

This film follows the stories of four Palestinian children who have been detained and imprisoned by Israel. Their perspectives, along with the voices of their families, combine to create a lens into the entangled structures of Israeli oppression that expand well beyond the prison walls.

Hosted by the Dublin branch of the Ireland-Palestine Solidarity Campaign